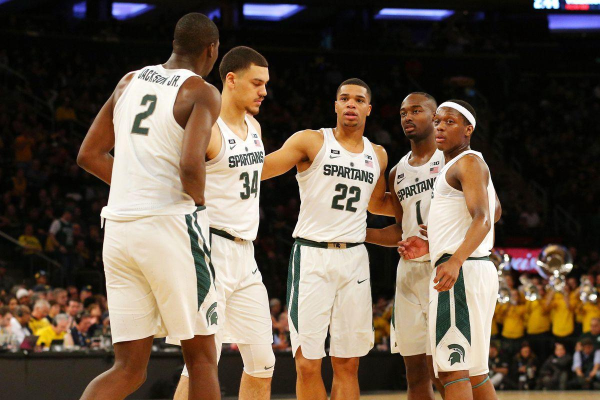 For Michigan State, they come into this game having won 10 games in a row stretching back to a road loss against Louisville (82-78) on November 27. Their only other loss was to number 7 Kansas, 92-87. Aside from those two, the Spartans have been perfect. In their last contest on Sunday, Michigan State beat Penn State 71-56 on the road.

For the Cornhuskers of Nebraska, they have played really well to start the season and have turned some heads in the process. In their last game, on Monday, they knocked off number 25 Indiana 66-51. They have lost their other 3 games against ranked opponents, but played number 19 Maryland really tough earlier in the month, losing by 2 on the road. Michigan State and Nebraska will square off Thursday with tipoff scheduled for 8:00 pm ET.

In this contest, the Michigan State Spartans come in as 1.5-point favorites despite playing on the road. The over/under for total points scored is set at 146.5.

Defensively, Nebraska comes in at 10th in the nation allowing just 60.8 points per game. Michigan State is also respectable to this end, ranking 68th and allowing 66.8 points per game. In fact, Michigan State is tied for 9th in the country in block shots per night at 5.6 (to their credit, Nebraska ranks 32nd in block shots at 4.8 per night) and ranks 2nd in rebound margin at 12.1.

On the offensive side, Michigan State has the edge. They rank 12th in the country averaging 85.5 points per game and are especially deadly from behind the arc (39.8%, good for 10th in the country). The Spartans’ field goal percentage in general is off the charts as they rank 7th in the nation at 50.5% shooting. Nebraska, on the other hand, ranks 74th in points (78.4 per night) and 65th in shooting percentage (47.3%). While neither of those stats is bad for Nebraska, they may have a tough time keeping up with the Spartans.

When Tom Izzo recruits players, he isn’t just looking to be competitive; he is looking to win the national championship every year. This year is no different, and the Spartans certainly look like they have the talent to make a run.

The Spartans are led on the offensive side with a trio of players who are each averaging 15 points or better. Junior Guard Cassius Winston has been unstoppable to start the season. He is averaging 17.6 points, 2.4 rebounds, 7.4 assists and 1.2 steals per game. He is also shooting 48.8% from the field and 45.4% from the three. Next up is junior forward Nick Ward. He is averaging 16.6 points, 6.9 rebounds and 1.6 blocks per game while shooting 65.4% from the field. Lastly, Joshua Langford has averaged 15 points, 3.6 rebounds, and 2.3 assists per game.

While these three have been their top scorers, Michigan State has 8 players who are averaging 15 minutes or more per game. Each of those players is averaging 4.5 points or better, and a few have been dominant on some of the peripheral stats. For instance, while Xavier Tillman is averaging just 8.5 points, he is also contributing 7.7 rebounds, 2.1 assists, and 1.7 blocks. Kenny Goins is similar, averaging 6.6 points, but also giving 9.4 rebounds, 2.5 assists and 1.3 blocks per game.

The Cornhuskers have gotten off to a great start and have a handful of players who have been playing lights out this season. Like Michigan State, they have several scoring threats on the top end, but unlike the Spartans, don’t have quite the depth.

Still, Nebraska has shown that they can hang with top talent and if Michigan State isn’t careful, the Cornhuskers could steal one at home.

Spartans Too Much On Both Ends

While Nebraska has seen some top-25 teams, they haven’t seen anyone as dominant as Michigan State. The Spartans can win the game on both ends of the court, and I think they are going to make it a long night for the Cornhuskers. If this was a larger spread, I might consider Nebraska with how well they have played, but at only 1.5 points, this seems like a no brainer to me to take the Spartans. For my money, I am taking Michigan State despite laying 1.5 points.