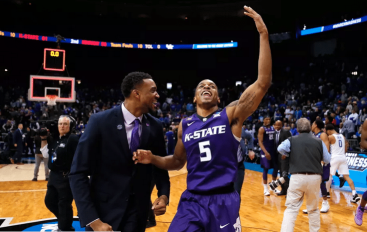 For the Jayhawks, Dedric Lawson had 18 points and 9 rebounds. This time playing at home, the Jayhawks will look to dethrone their intrastate rival. Tipoff for this matchup is scheduled for 9:00 pm ET.

Coming into this contest, the Wildcats have won four of their last five, with their lone loss being a 78-64 loss to Iowa State at home last Saturday. They are hoping to show that the first matchup was not a fluke and improve their ranking as tournament seeding approaches. For the Jayhawks, this game is about redemption. They are trying to prove that they truly are the top team in the Big 12, despite the fact that they are currently in 3rd place. Since losing to Kansas State the first time, they have won three of their last four, although they did get thrashed by Texas Tech on Saturday, 91-62. Still, the talent is there, and Kansas hopes to put it all together playing at home.

In this contest, the Kansas Jayhawks come in as 4-point favorites playing at home. The over/under for this game is set at 133 points.

Defensively, Kansas State has been one of the best teams in the nation. They currently rank 4th overall and are allowing a paltry 59.8 points per game to opponents. For Kansas, they are allowing 69.8 points per game, good for 141st overall. Despite giving up more points, Kansas ranks better in both defensive rebounds per game (40th with 27.65) and defensive field goal percentage (25th, holding opponents to just 40.1% shooting).

Currently sitting in first in the Big 12, ahead of both Texas Tech and Kansas, this game could go a long way in cementing a conference title. To do so, though, they are going to have to control both sides of the floor, making sure their highly ranked defense comes to play and getting solid contributions throughout their lineup on the offensive side.

Leading the way offensively for the Wildcats this season has been Barry Brown Jr. The senior guard has averaged 15.7 points on 46% shooting. He is also averaging 4.2 rebounds, 2.7 assists and 2 steals per game.

It has seemed like a never-ending battle for Bill Self and his squad this year. One game they are looking dominant and then the next game you are not sure what you are going to get. Nothing exemplifies this more than some of their home and aways. With Iowa State, Texas Tech and West Virginia, they split with all three of these teams, winning one and losing one. The Jayhawks are hoping they can do the same with Kansas State.

Leading the way this season for Kansas has been forward Dedric Lawson. On the season he is averaging 19 points a game on 50.3% shooting. He is also averaging a double-double as he is grabbing 10.1 rebounds in addition to 1.9 assists, 1.1 steals and 1.1 blocks per game.

Unfortunately, with Lagerald Vick and Udoka Azubuike out, it has left the Jayhawks pretty thin. The next biggest contributor has been guard Devon Dotson, who is averaging 12 points, 3.7 rebounds, 3.6 assists and 1.4 steals per game.

Kansas is a hard team to trust this season as you just never feel 100% confident in what team is going to show up. Despite that, one area where you can trust them a little more is at home, where they are a perfect 15-0 this season. Additionally, thThe Kansas State Wildcey have only lost back-to-back games once this season and, once again, those were both on the road. With that being said, I do think that Kansas regroups after their big loss against Texas Tech and comes out determined to even the series against the Wildcats. For my money, I am taking Kansas despite laying the 4 points.