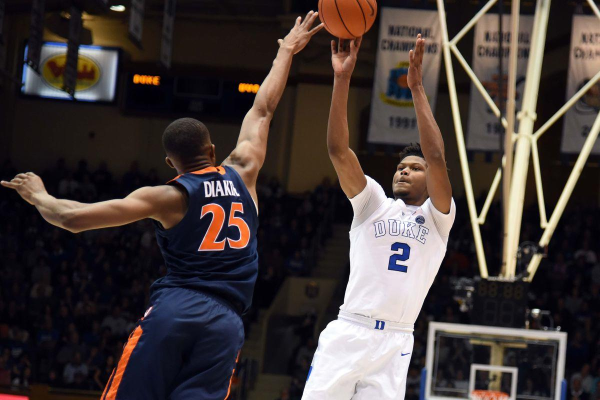 Monday night’s slate of NCAA games features a top versus bottom ACC matchup when the no. 2 Duke Blue Devils (17-2, 6-1 in the ACC) travel to the Joyce Center to take on the Notre Dame Fighting Irish (11-9, 1-6 in the ACC).

For Duke, they have won 3 in a row since losing to Syracuse 95-91 on January 14th. That 3-game stretch of victories includes a victory over no. 3 Virginia, 72-70. The Blue Devils will look to use their explosive, high-flying attack against the Irish. For Notre Dame, they come into this matchup having lost 4 in a row. In fact, their last loss was to that same Virginia team to the tune of 82-55 on Saturday despite playing at home. Tipoff for Duke versus Notre Dame on Monday is scheduled for 7:00 pm ET.

In this contest, the Duke Blue Devils come in as 13-point favorites despite playing on the road. The over/under on total points scored comes in at 151.

On the offensive side of the ball, there aren’t too many teams that can keep up with the Blue Devils. They currently rank 3rd in the nation in scoring (88.6 points per game) and 29th in field goal percentage (48.5%). Additionally, they distribute the ball well (17.5 assists per game) and even crash the offensive boards well (14.67 offensive rebounds per game). For Notre Dame, they come in tied for 167th in the nation scoring 74 points per game. Sadly, their shooting percentage is even worse, coming at 41% from the field, which ranks 317th in the nation.

Defensively, Duke still ranks pretty well, allowing an average of 66.9 points per game to opponents (67th in the nation). Between their offense and defense, that gives Duke a scoring margin of 21.7 points per game, which ranks 2nd only to Gonzaga. Notre Dame comes in at 113th in the nation, allowing 68.7 points to opponents. Of all the defensive stats, the one that Duke really stands out in is blocked shots, where they rank 1st overall, averaging 7.7 blocks per game. They also rebound it well, averaging 28.56 defensive rebounds per game (26th overall).

While it might be a group of one and done type players, this Duke squad is one of the most dynamic Mike Krzyzewski has put together. They are led by a two-headed scoring monster in freshmen forwards RJ Barrett and Zion Williamson. For Barrett, he is averaging 23.9 points per game while also adding 6.9 rebounds, 3.9 assists and 1 steal per game. For Williamson, who many consider the likely first overall pick in the next NBA draft, he is averaging 21.7 points, 9.2 rebounds, 2.3 assists, 2 steals and 1.8 blocks per game. He is also shooting a whopping 67.4% from the field.

Those aren’t the only impact freshmen for Duke, though. Cam Reddish has played well this season, scoring 12.8 points, 3.5 rebounds, 2 assists and 2 steals per game. Additionally, the Blue Devils just welcomed back Tre Jones from injury. The freshman guard may not have stats that jump off the score sheet, but he helps to solidify an already dangerous lineup. He is averaging 8 points, 3.1 rebounds, 5.6 assists, and 2 steals this season.

Notre Dame understands that to win this game, they are probably going to have to play their best basketball of the season and hope that Duke has a dud of a game. For the Irish, they are led by three scorers who are averaging double-digits. Junior forward John Mooney leads the way, averaging a double-double each night with 14.5 points and 10.8 rebounds. He is also shooting 52.5% from the field, 79.7% from the free throw line and 45.5% from behind the arc.

Aside from Mooney, guards TJ Gibbs and DJ Harvey are the other prominent scorers for the Irish. Gibbs is averaging 13.4 points, 2.2 rebounds, and 3.9 assists while Harvey averages 11.1 points and 4.5 rebounds per game. Their other biggest contributor on the stat sheet is Rex Pflueger, who averages 8.1 points, 4.7 rebounds, 4.3 assists and 1.7 steals per game.

Duke Wins In A Blowout

In my mind, it is not about whether Duke will win or not, it is by how much they will win that is the question. With all due respect, I don’t think they have an answer for RJ Barrett or Zion Williamson on the defensive side, and they certainly do not have enough firepower to stay up with them on the offensive side. The biggest hope for the Irish has to be to get a couple of Duke’s guys in foul trouble and hope to slow the tempo down while also minimizing mistakes. Even then I don’t know if it will be enough. For my money, I am taking Duke, even laying the 13 points.