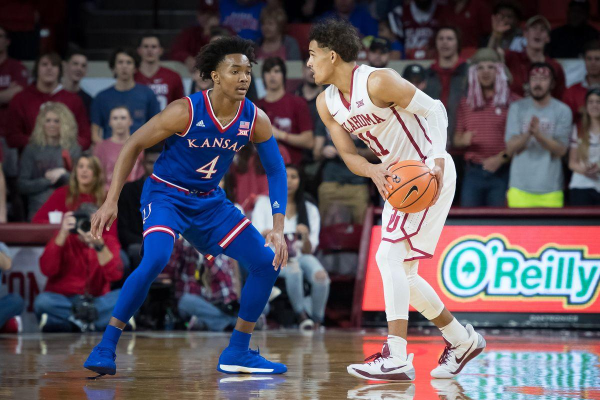 Wednesday night will feature a matchup of top-25 teams when the Oklahoma Sooners (11-1) travel to Allen Fieldhouse to take on the number 5 Kansas Jayhawks (11-1). This is the first of the Big 12 Conference games for both teams.

For Oklahoma, they come into this game having won 7 in a row, including a 76-69 win over Northwestern in their last outing. Despite their strong record, Oklahoma has only face one other ranked team and that ended badly for the Sooners as they lost 78-58 against Wisconsin. For Kansas, they are little more battle tested having beat three other top-25 teams already including a 87-81 win over Tennessee, a 77-68 win over Marquette and a 92-87 win over Michigan State. Their lone loss, though, came against an unranked team in the form of an 80-76 loss to Arizona State back on December 22. Still, Kansas has shown they can be lethal and will look to continue their success against ranked teams with Oklahoma. Tipoff for this contest is scheduled for 9:00 pm ET.

In this contest, the Kansas Jayhawks open as 10-point favorites playing at home. The over/under for total points scored is set at 149.5.

On the defensive side, Oklahoma has the better team defense as they are allowing just 65.8 points per game to opponents. For Kansas, they are tied for 160th, allowing 70.5 points per game. For scoring offense, though, Kansas is statistically stronger. They rank 49th in the nation, averaging 81.2 points per game. Oklahoma comes in tied for 122nd, averaging 76.6 points.  Looking at scoring margin, which takes both offense and defense in account, Kansas ranks 60th in the nation at 11.8 points while Oklahoma comes in at 72nd with 10.5 points.

Oklahoma Looking For Statement Win On The Road

For Lon Kruger’s Sooners, senior guard Christian James leads the team statistically. On the season, James is averaging 17.9 points, 7.2 rebounds and 2 assists per game. From the field he is shooting 46.9% while shooting 36.7% from behind the arc. For Oklahoma, they have two other players averaging double-digit scoring. Miles Reynolds (10.9 points, 2.9 rebounds, 1.3 assists) and Brady Manek (10.8 points, 7.5 rebounds, 1 assists) are their other leading scorers.

Oklahoma basically goes 9 deep with all 9 averaging 13 minutes or more but their strongest 6 all go 22 minutes or more on average per game. In addition to their 3 leading scorers, Aaron Calixte (8.7 points, 2.8 rebounds, 3.3 assists), Jamuni McNeace (7.7 points, 5.5 rebounds, 0.8 assists) and Kristian Doolittle (7.2 points, 5.8 rebounds, 0.6 assists) round out the major contributors. Unfortunately for the Sooners, center Jamuni McNeace is seen as doubtful for this game as he recovering from a right ankle sprain.

Kansas Looking To Knock Off Another Ranked Team

Coach Bill Self really relies on his top players on a nightly basis as he really only goes 7 deep. Those 7 players each average 18 minutes or more per game, with no other player getting more than 9. The leading scorer is junior forward Dedric Lawson. This season he has been dynamic, averaging 19.6 points, 10.8 rebounds, 2.5 assists and over a steal per game. He is also shooting 51.8% from the field and 80.3% from the free throw line.

Kansas To Win And Cover

10 points is a pretty big spread, especially when looking at 2 top-25 teams, but I think Oklahoma has a lot to prove still. They have played a relatively weak schedule and their one tough opponent they were blown out by. Now, they have to not only play the 5thranked team in the nation, but they have to play them on the road. Thrown on top of that the fact that they will likely be down a starter in McNeace and they are certainly at a disadvantage. In the last 10 matchups between these teams, Kansas is 8-2 and I thoroughly expect that to move to 9-2. For my money, I am taking Kansas even giving up the 10 points.