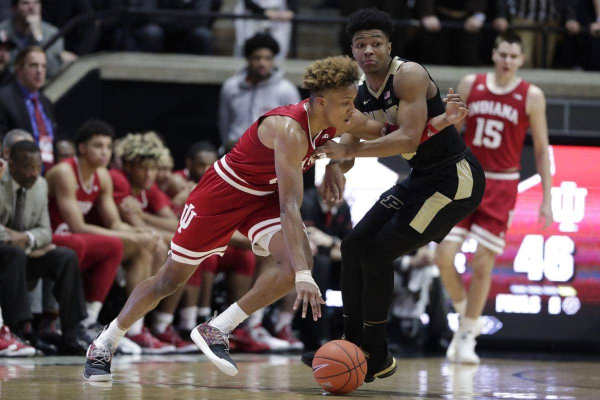 It has been a pretty bad week for the Michigan Wolverines. It has been even worse lately for the Indiana Hoosiers.

For Michigan, they are coming off back-to-back bad performances. The first was in a 64-54 loss to Wisconsin on Saturday only to be followed up with a dud against Minnesota, one that required some late heroics to get a 59-57 victory. For Indiana, it has been even worse lately. They have lost five in a row stemming back to a 74-63 loss against Michigan on the road January 6th. Now, they will get to square off again with the Wolverines as Michigan (18-1, 7-1 in the Big Ten) travel to Branch McCracken Court at Assembly Hall to take on the Indiana Hoosiers (12-7, 3-5 in the Big Ten). Tipoff for this one is scheduled for 6:30 pm ET.

In this contest, the Michigan Wolverines come in as 3.5-point favorites despite playing on the road. The over/under on total points scored comes in at 133.5.

On the season, Michigan has been one of the best teams in the country on the defensive side. They currently rank 3rd overall in scoring defense, allowing a paltry 57.1 points per game. They are also holding teams to just 40% shooting from the field (34th overall) and are especially tough against the three with opponents shooting just 30.7% (45th in the country). Indiana isn’t too shabby, either. They actually rank 44th in 3-point defense, allowing opponents to shoot just 30.6% and 53rd in the nation in scoring defense, allowing just 66.2 points per game.

Offensively, neither team is nearly as good. Indiana ranks 162nd in scoring (74.2 points per game) while Michigan ranks 224th (71.8 points per game). Despite the mediocre scoring output, Indiana is relatively efficient, shooting 49.8% from the field (good for 12th in the nation). Michigan, on the other hand, comes in at 120th, shooting 46%.

Michigan Looking To Get Back To Dominant Self

The nice thing for Michigan is they have been here before. Last year they had a rough stretch or two, but that did not preclude them from finishing the seasons playing for the national championship. For the Wolverines, they are hoping that a rough week can be a learning moment and the team can start turning it around. Having beaten teams like North Carolina and Villanova, the Wolverines know they have the talent; now it is just executing during the games.

For Michigan, who only go about 7 deep in their rotation, they are relying on the likes of Ignas Brazdeikis, Charles Matthews, and Jordan Poole. For Brazdeikis, he is averaging 14.9 points, 5.5 rebounds and 1.1 assists per game, while shooting 45.2% from the field. For Matthews, he is averaging 13.3 points, 5 rebounds, 1.2 assists, and 1.3 steals while Poole is averaging 12.9 points, 3.3 rebounds and 2.2 assists. The last time that Michigan met up with Indiana, Poole and Matthews led the way with 18 apiece.

Indiana Looking To Get Revenge, And End Skid, At Home

After what seemed like a very promising start to the season, Indiana is looking to end their miserable 5-game losing streak against the team it started against, Michigan.

Indiana really is a two-headed monster, with Romeo Langford and Juwan Morgan doing most of the damage on the offensive side. Langford is averaging 17.6 with 5.4 rebounds and 2.4 assists per game. Morgan is averaging 16.5 points, 7.9 rebounds, 2.5 assists, 1.1 steals and 1.4 blocks per game. He is also shooting 61.1% from the field. The last time these two met up, Morgan scored 25 and Langford scored 17 in the loss.

The problem, though, is they don’t have a whole lot around them. Justin Smith, Devonte Green, and Aljami Durham all average about 8 points per game, but there is no other player outside of Langford and Morgan that you are truly worried about going off.

Michigan Wins On The Road

Admittedly, neither team has played particularly well as of late. Still, I have more confidence in Michigan coming out of their funk right now than Indiana. During their 5-game losing streak, Indiana is averaging only 62 points, and that is before having the 3rd best scoring defense come into town. Michigan may not blow them out, but I do see them covering the 3.5-point spread. For my money, I am taking Michigan in this one.