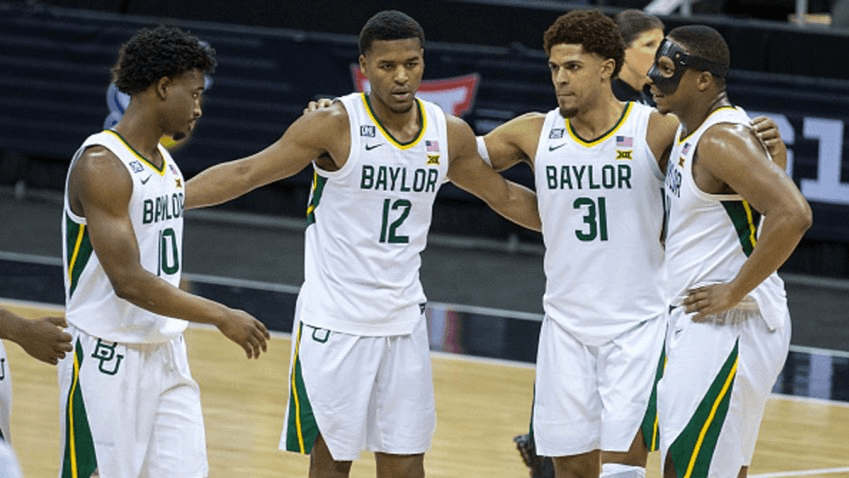 After yesterday’s First Four round, the 2021 NCAA Tournament gets underway in earnest today as the first round tips off. Sixteen games are on tap today, with March Madness favorites Baylor, Houston, Illinois, and Houston among the teams in action today.

With a full slate on deck, let’s skip past the buildup and get right to the games, which are grouped by category. .

Colgate never played outside of the Patriot League this season. Their metrics are interesting but are tough to evaluate based on the level of competition. They play a run and gun style that is very exciting.

Arkansas plays that style too and with more athletic and more talented players. The Selection Committee could not have given Colgate a worse matchup than the draw they got. Moses Moody is one of the best freshmen in the country, and the nation is going to see why.

Betting Advice: This one has come down since opening which makes no sense to me. Arkansas wins with ease, doubling the spread. One of the best bets of Day 1. Take Arkansas.

The Dragons got into the NCAAs by winning the CAA tournament as the sixth seed. This is not their first time dancing, but they are going to have their feet broken. There are just no real advantages for them.

Illinois is playing as well as any program in the country. They have at least two NBA players in their starting lineup and a potential POY in Ayo Dosunmu. They just won the Big Ten, so fending off a CAA champ should not be too difficult.

Betting Advice: Illinois has talent and depth. I expect them to be up at least 15 points at halftime then cruising from there. A classic #1 seed domination. Take Illinois.

The Hawks are a nice story as they are playing in their first-ever NCAA Tournament. Unfortunately, it is going to be a quick exit. There is just no formula for them competing with the Bears.

Baylor was looking like the best team in the nation before they had a COVID pause. Since then they have looked really good with occasional bouts of mortality. They still have the depth and talent to beat almost every team in this field by double digits. The depth gets this cover on Thursday.

Betting Advice: Baylor was 5-0 ATS against non-Big 12 teams when favoured by more than 20 points this season. There is no reason this one doesn’t play out as those games did. Take Baylor.

The Beavers were classic bid thieves, winning the PAC 12 Tournament. You have to beware of narratives this time of year. Nobody was talking about Oregon State in January as a team to watch. Don’t get carried away.

Pundits were talking about Tennessee all season, something along the lines of “they have so much talent” and “they are one of the best defensive teams in the country”. Both statements are true so leaning into them makes sense this time of year. You can still look smart with your Vols love.

Betting Advice: I know a lot has changed since then but if these teams met during the nonconference in December I think the line would have been 10 or more. Have things really changed that much? Tennessee’s freshmen are picking it up and getting better every game. Take Tennessee.

The Vikings won the Horizon and are in a classic case of playing a team that plays the way they do, just with better talent. If this one has a really slow tempo, the scoreline could be respectable.

The Cougars are tremendous defensively, giving up just 58 ppg. They do not have much height, but that is not a deficit the Vikings will be able to exploit. Houston wins at every spot on the floor and against nonconference opponents, they won by an average of 28 ppg this season.

Betting Advice: The Cougars have covered the last 6 times they were double-digit favaorites. When they are rolling it looks like they will never stop. Take Houston.

The Mean Green might have a cool name, but the Conference USA champions are likely to exit early. They had a nice season, but they are going to be overwhelmed by the size and skill of the Boilermakers.

Purdue is one of my big sleepers in the 2021 NCAA Tournament. They just played a Big Ten season and showed they can compete with anyone. They have a nice mix of youth and experience, and they have size that is tough to prepare for. Coach Matt Painter’s team has improved as the season has gone on.

Betting Advice: Purdue is not going to run out to a 20 point lead by halftime. However, by the time the game is done, that is where this one will be.Take Purdue.

Underdogs That Can Cover

Georgia Tech was a surprise winner in the ACC, maybe the biggest surprise considering the teams in that conference. They just took a major hit with their top big man not being available for this game. They are still a little intriguing though.

The Ramblers are grossly under-seeded. The Selection Committee uses all these metrics but still can’t get over themselves and their affinity for the teams they see every night on TV. Loyola’s style of play lets teams stay in the game though.

Betting Advice: Take Loyola…now. Watch the first half though and maybe look at GT in-game if they don’t seem too shaken.

The Aggies are good. They play really good defense and have a rare difference-maker inside in center Neemas Quieta. They are not going to be rattled if this is in the 4os after the last TV timeout.

Texas Tech has disappointed me all season long. It’s not that they are bad but they just seem to leave you wanting more. The defense is still elite but I don’ trust them to make shots if this one is tight. It feels like they don’t do well as a favorite either.

Betting Advice: Texas Tech lost six times as a favorite and was just 9-13 ATS in that role. Fade them here. Take Utah State

The Flames are a popular sleeper pick. They do all the things you need to create an upset. They play stellar defense, allowing only 58 points per game, which is third in the country. And they make 39 percent of their shots from three, which is ninth in the country. They also have great leadership from Darius McGhee. He is just 5’9”, but look out.

Cade Cunningham is an amazing prospect, but he can defer too much at times. Something like 80% of his points come in the second half, but what if they are down and he just isn’t feeling it. That is flirting with danger.

Betting Advice: All week folks have been saying the Cowboys were under-seeded. If I were them I would be complaining about the opponent. This is a high variance team. They could make the Final Four or exit early. Take Liberty plus the points.

Winthrop has a great record at 23-1, but you can be skeptical of just who they played to pick up those wins. What is not uncertain is that they are very well coached and that they could not be getting Villanova at a better time.

Villanova was a top-5 team to start the season, a talented and veteran group that looked like they could play with any team in the country. This is not that team. They are missing their PG and leader Collin Gillespie and might not have fully recovered from their COVID pause. They look ripe for the picking.

Betting Advice: Somehow this one has risen from -6 to -6.5. It looks like people are fading the narrative of fading the Wildcats. I am not there. Take Winthrop.

The Hokies can beat good teams but since they beat Virginia they have struggled on the court, and to get on the court (COVID pause). If this game was played on Feb 1, they would likely be favored by three or so.

Florida had its moments in the SEC this season. They overcame the loss of top scorer Keyontae Johnson and are now leaning on Tre Mann, who is good enough to put the team on his back.

Betting Advice: This is the first game of the day. It might take a little while to get going, but Florida can get you your first win. Take the Gators.

Wisconsin might not deserve to be here. Yes they play in the toughest conference, but they seemed to get worse as the season went on. That is a surprise given how experienced the Badgers are. This team is not loaded with shooters like they normally are.

North Carolina underperformed too but there is more certainty with the Tar Heels. If the Badgers want to play slow that can be an advantage for the Tar Heels who have NBA talent and size inside.

Betting Advice: This one is a huge tossup, but the Tar Heels are the lean here due to having fewer weaknesses.

The Scarlet Knights are capable of going on a run. They have really good talent but their consistency was maddening. They got a great draw though as playing Clemson will allow them to stay in the game even when they go through a scoring draught.

Clemson stays in games because of their commitment to defense. The Tigers go cold scoring wise for way too long and just don’t have those players who can get you buckets when you need them.

Betting Advice: Rutgers plays good defense but has better playmakers. Those are the difference. Take Rutgers.

Syracuse is always tricky in the these one and done scenarios. Their zone defense can get you off your game and they have enough juice on offense. Buddy Boeheim is one of the best shooters in the field.

SDSU was one of the teams that really lost out with no NCAA Tournament last season. This year’s team is not as good, but they play excellent defense and make few mistakes. That works well this time of year.

Betting advice: Maybe wait to see how the Aztecs look against the zone. If they are solid, fire away. Take San Diego State.