Will the Pacers’ Ship Sink with Oladipo’s Knee? 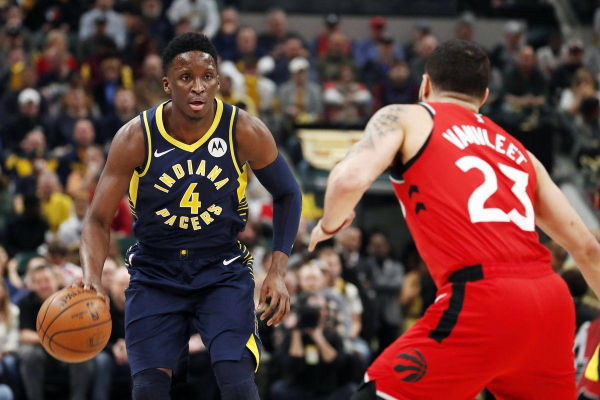 It was only 24 hours ago that Indiana, once again the most underrated team in the NBA, was 31-15 and the #3 seed in the eastern conference. Their star player, hometown kid Victor Oladipo, was healthy and though his numbers were down, he had been back from injury for a few weeks. But in the opening quarter against the Raptors, Oladipo—and the Pacers’ season— may have come crashing down.

The saddest part of Oladipo’s knee injury is that he is not the first Pacers star to suffer such a thing. Danny Granger, a one-time Pacers All-Star, suffered a devastating knee injury in his age-29 season, and would actually only play 71 more games for the rest of his career. His time in Indiana saw him relegated to a sixth man. Then Paul George, as we all know, had that gruesome leg injury during the team USA scrimmage. And now here we are with Oladipo. This franchise does not have good luck for wing players and keeping consistent clean bills of health.

Anyway, let’s get to the point of this article. How does this affect the Pacers’ odds this season? We can cross them off as being the potential first seed in the conference. They are only a few games behind both Toronto and Milwaukee, but this makes it almost impossible for them to catch up. Tyreke Evans, who has been very up and down, will have a chance to be the primary shooting guard for the team, while Aaron Holiday, who they had trouble finding minutes for, could see himself playing regularly.

This will only put more pressure on Myles Turner to play well, though his offensive game has taken a big step back. Domantas Sabonis is still looking like a stud off the bench, while Darren Collison and Cory Joseph have not been doing anything special, though they are moving the ball around well and hitting their mid-range shots. Bojan Bogdanovic could now become the primary offensive option for now. But, it would not be surprising to see Indiana try to chase one of the top wing players on the market, with the trade deadline just two weeks away.

This is still a pretty young team, as Darren Collison is their oldest player. But quite a few of their top guys are 29-31 years old, and they could sure use somebody in their mid-20’s to come in and bring the Oladipo type of energy they are missing. We’re not going to speculate any names here, but there are plenty of guys out there.

This likely eliminates Indiana from the conversation of a deep playoff run unless they can rally together like the Celtics did without Kyrie and Hayward last year. After being one game away from knocking the Cavs out in the first round last year, they just couldn’t close the deal in game seven. It would be hard to envision this team making it out of the opening round of the postseason with the roster they have without Oladipo.

They are surrounded by role players, though upper-echelon role players, it’s still what they are. Not elite guys. Not take-games-over guys. It will test the whole team, and we’ll know when they next take the court against a struggling Grizzlies team on Saturday, just what this will look like.

The hope for the Pacers is that Tyreke Evans can now step his game up, and Aaron Holiday might shine in a new opportunity.

The Pacers‘ ship does not immediately sink without Oladipo, but their playoff-run opportunities do.