Which Team Down 2-0 Has the Best Chance for a Comeback? 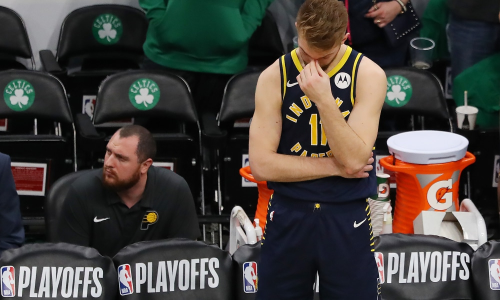 Five days into the NBA Playoffs, every series has seen two games played. We have four that are tied 1-1, and the other four are 2-0. So for today’s topic, we look at which team down 0-2 has the best chance to come back.

Nothing has gone right for them in the first two games of their series with Milwaukee, and they have just not played well in the second half. Last night, in game two, they actually found themselves with a lead at the half. The change they made in their starting lineup to insert Luke Kennard for Bruce Brown helped to ignite the offense, but only for the opening half. When the second-half got going, they just didn’t stand a chance.

The issue here is that Blake Griffin is injured and unable to play. They only made the playoffs because of the Herculean effort he gave all season. This is probably going to end in a sweep.

They have hung tight with the Celtics in each of the first two games, and it seemed last night they didn’t have a chance. After struggling all-fourth-quarter long, Wes Matthews and Bojan Bogdanovic knocked down a few threes, and Indiana had the lead with two minutes left. After playing strong defense, they failed to capitalize on the offensive end. Jayson Tatum hit the game-sealing three, and that was it. They fell behind 0-2 in the series, after they were able to take the Cavs to seven last season. They are really missing Oladipo.

Indiana has had the lead at the half in each of the first two games, before going totally cold. This series is definitely not over, but they need to finish strong in the games that remain. If they can actually make their shots in the fourth quarter, we may be talking about Boston.

It is really unfortunate to see them behind 0-2 against Houston, but in truth, they are clearly out-matched. They lost to the Rockets in five games during the Western Conference semis last year, and aside from the win they had in game two, had a hard time. Donovan Mitchell has regressed, and his shots are just not dropping. Ricky Rubio is in way over his head when having to match-up against Harden. The decision from Quin Snyder to start with Rudy Gobert and Derrick Favors together has back-fired. They need to go with Royce O’Neale or Jae Crowder for game three, no question. Both Favors and Gobert are effective, but at their best when separated.

If they can get off to a solid start next game, maybe they’ll stand a chance. The odds are not in their favor right now, but they play well at home, and they have the personnel to put the clamps on Houston’s best.

OKC really should not be down 0-2, as they have only themselves to blame. Paul George played through a separated shoulder in game one, yet Billy Donovan let him stay out there for 43 of 48 minutes. OKC’s role players have faded under the lights, and Russ has not been himself. He has clearly been out-performed by Lillard, as he was in the teams’ final two regular-season meetings. Schroder and Grant need to start hitting their shots, and George/Westbrook have some work to do.

OKC is not quite dead in the water yet, but they have a lot of work to do. Nobody wants to see Russ lose in the opening round of the playoffs for the third year in a row.

TEAMS WITH BEST ODDS TO COME BACK, RANKED: