What Does the Future for Westbrook, Oklahoma City Look Like Without George? 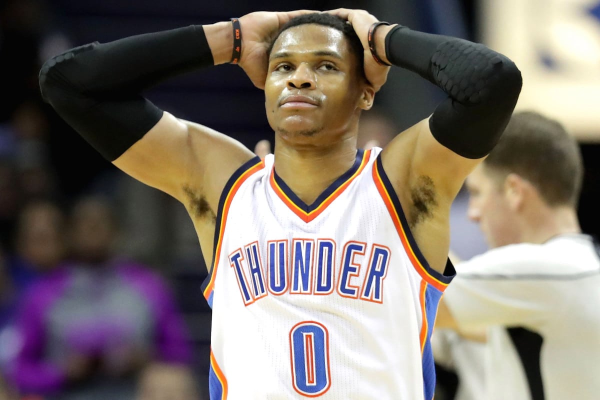 With one half of the Thunder’s one-two punch gone, where do they go from here?

There’s nothing like waking up to find out that one of the star players on the Thunder has been traded, especially if you’re Russell Westbrook, the other half of that one-two punch, and now, you’re on just a one-punch team. While the Oklahoma City Thunder have come close to tasting the very best that the end of an NBA season has to offer, they have also had to contend with some of the worst.

While this is a team that’s been very competitive in the past few seasons, this year’s playoffs were especially challenging, especially when Paul George was essentially “posterized” by a long-range three-pointer from Damian Lillard in the first round of the 2018 NBA Playoffs which sent George and the rest of the Thunder home packing.

In the ensuing confetti-laden aftermath, it definitely crossed George’s mind for a second: what the heck am I doing? Well, he made his decision and promptly signed on with the Los Angeles Clippers in a trade that sent him to Los Angeles to play ball with Kawhi Leonard, who is still fresh from his championship-winning high in Toronto.

With the Thunder undoubtedly preparing to strip their team apart and start over, what happens to the Thunder from this point forward? Will they still try and compete, or is GM Sam Presti and the rest of the Oklahoma City front office getting ready to totally break things down and move from their short-lived PG-Westbrook experiment?

When it comes to the Thunder’s chances, no, they have absolutely no shot going into next season, as far as competing for a championship goes. Frankly, the main takeaway should be that the Thunder are probably in one of the worst positions as far as every team in the Western Conference. While a lot of other teams in the conference, particularly the two Los Angeles market teams, added heavy firepower to their rosters, the Thunder are one of the odd teams that absolutely failed to make any moves that make them a “win-now” type roster.

Presently, the Thunder are 33-to-1 to win the NBA title, and while the roster is going to be in major flux over the next few weeks and months, it’s very likely that Russell Westbrook is total trade bait in the very near future. It would make absolutely no sense to trade away George and acquire a stash of draft picks without any intention of totally blowing the roster up, and frankly, it’s the best move long-term for the Thunder.

At +3300 odds, just a few spots behind the Portland Trail Blazers and Denver Nuggets, there is absolutely no doubt that the Thunder and their fans (and Westbrook, for that matter) are fully aware that this season is officially a wash.

Going forward, there is absolutely no value on the Thunder. Zero, zilch, none, nada, whatever language or phrase you want to use, they are dead on arrival as far as any long-term future bets. If you were silly enough to wager on them, well, might as well burn those tickets now.

Expect Westbrook to be on the move in the very near future, and when he does, it will officially shut the door on one of the NBA’s most perennially entertaining and exciting teams as far as competing for a world title anytime soon.