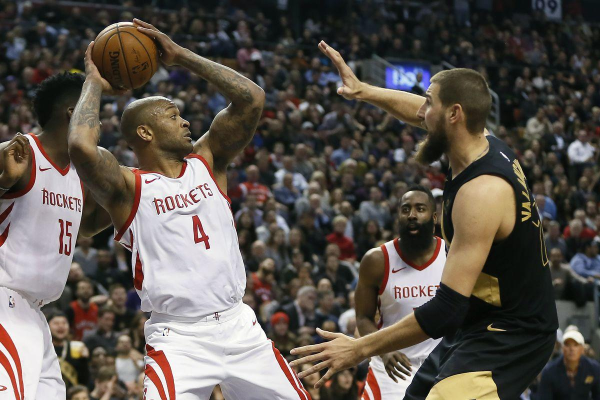 The Toronto Raptors are in Houston to take on James Harden and the Rockets in what should be a very interesting game because of a few particular dynamics. The Rockets are without their second- and third-best players and the Raptors are expected to get Kawhi Leonard back for this game. As I mentioned, Chris Paul and Clint Capela will both be out for the Rockets, which is a big deal, but I am not sure they mattered as much as people thought. Paul is expected back on Sunday, while Capela still has about a month to go before returning to the lineup.

The Rockets are a very strange team with all of these injuries surrounding the team. James Harden has obviously been incredible during this stretch, although I am not a fan of the way he plays basketball. If you haven’t watched Harden play, here is my interpretation of his game: dribble the ball and run around screens until I get switched onto a defender that I can trick into fouling me or that will give me an open shot.

The step-back jumper that Harden takes is the only reason the Rockets haven’t really missed a beat since the injuries.  It is impossible to defend due to Harden’s form. He gets enough space that only someone close to 7 feet tall can block his shot from their launch point. Then, he moves his feet forward in the air and lands on top of the defender if they do jump towards him at all and draws the foul. This shot is not guardable because of the way he flails his legs out to draw the foul and that is why NBA teams are so frustrated playing him. The Lakers notably closed out to the right of Harden so that he couldn’t draw contact with his legs, but that is a very unnatural thing to do, and they just struggled to contest the shot from the right.

The Raptors have a clear answer to this issue with Kawhi, and I think that they are better suited than most to switch onto him and hold their ground. Both Siakam and Ibaka are incredibly long and able to defend the perimeter rather well, so they could give Harden more fits after the switch than most teams do. This is a below-average spot for James Harden, meaning it is also below-average for the Rockets as a whole.

The Raptors without Kawhi have been a mixed bag when it comes to scoring, but it has been really clear all year that Kyle Lowry becomes a much different player when Kawhi is out. I think this is good for the dynamic of the team because Lowry clearly will defer to the better player but is always willing to step up and be their best player when called upon. With Kawhi returning to this game, I expect Lowry to take a back seat to Kawhi again, but foul trouble can always affect James Harden’s primary defender.

The Rockets guard defense is not very good, and I expect Lowry to be the key playmaker in this game if the Rockets throw P.J. Tucker on Kawhi. However, I think that the matchups just simply do not work for the Rockets here and that will force them to use more James Ennis than Austin Rivers in this spot while running Harden and Gordon at the 1 and the 2. Both Siakam and Ibaka are capable scorers if the Rockets do focus Kawhi with Tucker and Ennis. I expect Siakam to see Tucker and Ibaka to see Faried and Nene, so I give the advantage to Ibaka between the 2.

The Raptors being -3.5 point favorites in this spot is interesting to me with Kawhi now expected back, but I like that number for the Raptors on the road. I think that James Harden will have generally less success at drawing free throws in this game. James Harden has almost as many free throws as the Sacramento Kings do in the last 15 games if that explains to you how much free throws matter to his scoring output. If the Raptors can make life relatively difficult on Harden, I can actually see this game getting out of hand in the second half. I would get on this game early if you like the Raptors because I think this will close closer to -5 than to -3.5.