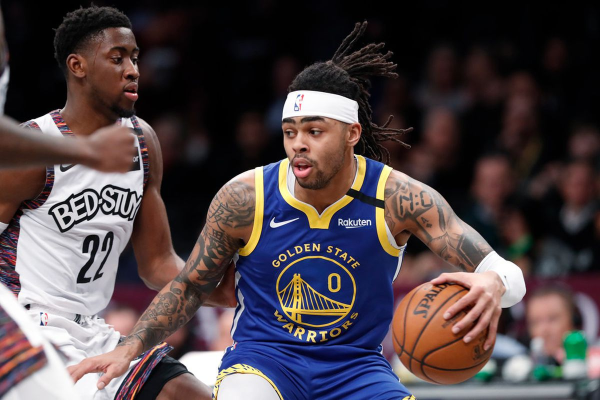 What began as a quiet NBA trade deadline period made plenty of noise as the window came to a close. The Warriors were one of the most active teams throughout, making their biggest move by sending former All-Star D’Angelo Russell to Minnesota in exchange for Andrew Wiggins.

The deal also included Jacob Evans and Omari Spellman landing with the Timberwolves and Golden State receiving first- and second-round draft picks in 2021. That first-rounder is top three protected, so if it ends up in the top three, it conveys to 2022 as an unprotected pick.

Russell now joins his 2015 draft mate Karl-Anthony Towns in Minnesota, giving the Wolves the point guard-big man combination they desired. In that draft, Towns was taken first overall, while Russell was selected second.

The deal was full of high draft picks, as Wiggins, who was selected first overall in 2014, moves to Golden State after spending his six-year career with the Timberwolves. He was originally selected by the Cavaliers but was part of the trade that brought Kevin Love to Cleveland.

While 23-year-old Russell has three years remaining on his $117 million max deal, the 24-year-old Wiggins is in the second year of his five-year, $140 million contract.

Who Won The Trade?

As is always the case when it comes to a trade in professional sports, we’ll have to wait and see how these players perform before deciding who wins in regards to this deal. However, it’s fair to say that both teams accomplished a critical goal.

In Minnesota, the Wolves were eager to pair a solid point guard with Towns. By landing Russell, they now have an All-Star point guard who’s currently averaging 23.6 points per game, a career high.

This appears to be the core Minnesota wants to build around, allowing it to focus on surrounding Towns and Russell with talent this summer and beyond.

In Golden State, the Warriors were always going to be dumping Russell. The star guard came over from Brooklyn as a sign-and-trade player in the deal that sent Kevin Durant to the Nets.

With both Klay Thompson and Stephen Curry expected to continue their roles with this team for years to come, it simply didn’t make sense to keep Russell and his large price tag around.

With Wiggins now on the roster, the Warriors can play the former Kansas star as a small forward and allow Curry, Thompson, and Draymond Green to remain in their positions. And although Wiggins has been something of a forgotten talent in Minnesota, he’s averaging 22.4 points and 5.2 rebounds per game this season.

This big-name trade between the Warriors and Timberwolves was a transaction between the two worst teams in the Western Conference right now.

Yet the Warriors are clearly taking a single year to recover from their injury woes before making another run at the Western Conference with Curry, Thompson, and Green next season. And the Timberwolves just made a deal that Vegas loves.

So, are we looking at two teams on the rise?

Although the Timberwolves still don’t have any real chance of competing for a place in the NBA Finals this year, their odds skyrocketed in response to landing Russell. Their previous odds of +100000 of winning a title fell to +25000 after the trade.

At the very least, that’s a big step in the right direction.

The Timberwolves now join the Warriors at that mark of +25000 to win the NBA Finals, as both teams are highly likely to be watching the playoffs from the couch this season.