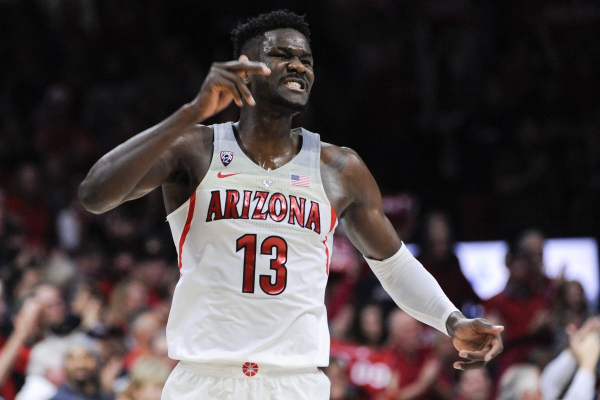 With the NBA Finals completed and the Golden State Warriors marching in a victory parade that is quickly becoming an annual event in the bay area, we know it is time to look to the future with the NBA Draft. The 2018 NBA Draft is expected to be a good one too with a deep pool of talent from all over the world. The lottery has been completed and the teams are ready to find the next great player to bring home a championship. There aren’t many nights in the NBA filled with as much hope and optimism as on Draft Night. A bunch of teenagers in expensive suits get to live the dream of working across that stage after hearing their name called while NBA executives smile big and cross their fingers hoping the landed the player they think they did. It is a fun night at the NBADraft and can be a fun night in the sportsbooks as well.

2018 NBA Draft Futures will be a fun wager to look into this week for the NBA sports gamblers out there. Draft nights are a night anything can and will happen. Trading up, trading down, players trending up, players trending down. There are always a few surprises during the NBADraft and this year should be no different. While everyone agrees Deandre Ayton will be the Phoenix Suns first pick, there is speculation as of late they may be looking to go a different way. The rumor mill is abuzz with talk of several teams moving up. Fortunately for you, we’ve done the homework here and have found the two most interesting NBA Draft Futures wagers out there. These not only consider big shake ups and major projections but they also have the best Futures’ value to cash the biggest payouts.

As mentioned, the PhoenixSuns are going to take Deandre Ayton with that first pick, supposedly. This has been the consensus since the ping pong balls gave the Suns the rights to that first pick. And that’s why we are finding very interesting outs on the second overall pick by the Sacramento Kings. Slovenian star Luka Doncic seems to have this pick wrapped up and at -200 is not that bad of a bet actually. Vlade Divac is the King’s general manager and he has made it clear the he loves this player as well as the Euro’s in general.

For obvious reasons, being one himself. However, a nice value at +300 is the freshman sensation from Duke,MarvinBagley III. Divac has also expressed his love of this big man and again, for obvious reasons, being one himself. Of the top three picks, most project Bagley as the can’t miss option. Ayton and Doncic have the bigger upsides as future stars though and this may come down to if Divac feels like rolling the dice. With the second overall pick, both are interesting players as well as interesting wagers.

Of course, with whatever happens in those first two picks is going to make the third overall pick that much more interesting. Marvin Bagley III sits as the favorite here at three and has since the beginning. And that’s just it. The prognosticators since the start have all agreed on Ayton, Doncic, Bagley and the one, two, three. However, we think this is why you are seeing the odds shape up the way they are. Much has changed since the lottery and the NBA teams have done their expensive research. Bagley at +100 is a great value and a great bet.

However, you have two dark horses here who have received plenty of attention as of late and have moved up the draft as the weeks have passed. JarenJackson of Michigan State comes in at +125 to be taken third overall. Not far behind Bagley who was a lock last month for that spot. But the best line and value may be the +500 Any Other Player wager. We really like this Future wager for two reasons, Michael Porter Jr. and Trae Young. These two players have been climbing the draft board the past two weeks and it would not be a shocker to see them sneak in at number three. Michael Porter Jr. is past the injury that lead to him to only playing a few games at Missouri and he has returned to the top of the pack. Everyone loves the idea of Trae Young being the next Steph Curry and, believe me, no one wants to be the team that didn’t draft the next Steph Curry. +500 with those to players in your pocket is a great wager, especially if we’ve already seen the inevidentable draft night trade.