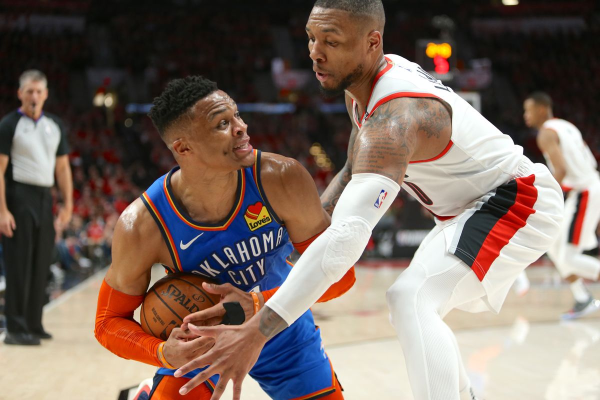 The Portland Trail Blazers are heading to Oklahoma City to take on the Thunder in the third game of the 3 vs. 6 matchup that has seen Portland take an early 2-0 lead. It isn’t quite time for Oklahoma City to hit the panic button because they still just need to hold serve on their court and then steal one game in Portland, but that is easier said than done.

Going into this series, Oklahoma City opened as a slight favorite, and they were heavily bet up to about -180-200 before the series started. Obviously, the outcome of these two games was relatively surprising, but the Trail Blazers are still a 3-seed in the West, and they need to be respected as such.

I believe that the biggest question mark of the series was the health and depth of the Trail Blazers. With the terrible loss of Jusuf Nurkic late in the season, Portland went from a scary playoff team to a team missing one of three key scorers. Never mind the fact that C.J. McCollum was injured at the time as well and really didn’t show that he was at full strength until Game 1 on this series.

I have been a really big fan of Enes Kanter as a basketball player, and this Kanter pickup has now proven to be one of the biggest moves of the season. Kanter is an elite rebounder, and he is skilled around the rim.

The huge issue with Kanter has always been his ability to defend smaller players in screens. If you want to see nationally televised humiliation, which clips of elite shooters playing against Kanter, specifically against a team like Golden State. This has REALLY lowered Kanter’s value on the market, and that is the reason that he isn’t a valued player in the NBA.

I do think that the Thunder lack a ton of players to exploit this flaw like a Golden State can. Kanter struggled with foul trouble in the second game, but the first game was a sign of just what Kanter can do offensively. This offensive production almost neutralizes the Nurkic injury and makes the Trail Blazers tough to defend.

Guards Key For the Thunder

I think the biggest key for the Thunder is the shooting performances of the guards. Like I mentioned before, Enes Kanter is one of the worst defenders in the league, and this is easily exploitable for jump-shooting guards.

Do the Thunder have those? Not really. Russell Westbrook has never seen a jumper that he doesn’t like, but that doesn’t mean that he is a great option to play iso-ball against Kanter all game, as the Blazers will just bait him into taking 3’s.

Dennis Schroder has struggled to shoot in this series as well, and that has always really been his issue as well. Paul George is the iso-king in Oklahoma City, but he has a shoulder injury and is not even close to the same player that he was during his MVP-caliber stretch earlier in the year.

George has relied a lot on getting to the line to score, and he has really struggled to put together the huge games that we saw early in the season. If these three can knock down shots at a good rate in isolation, I think the Thunder can win this game and even the series, but they have not shown the ability to do this so far.

The Thunder are -7.5 point favorites in this matchup and I think that is WAY too much. This line is the line you would have gotten before the series started and we saw the first two games, in which Portland looked like the better basketball team. Sometimes we see an overreaction to the results, but I think this is an underreaction.

The biggest question for me is how will Kanter fare in a playoff series with real strategy involved, and he has been good enough to make me feel much better than I was before the series started. I love the Blazers +7.5, and I think +275 on the money line is a nice number as well.