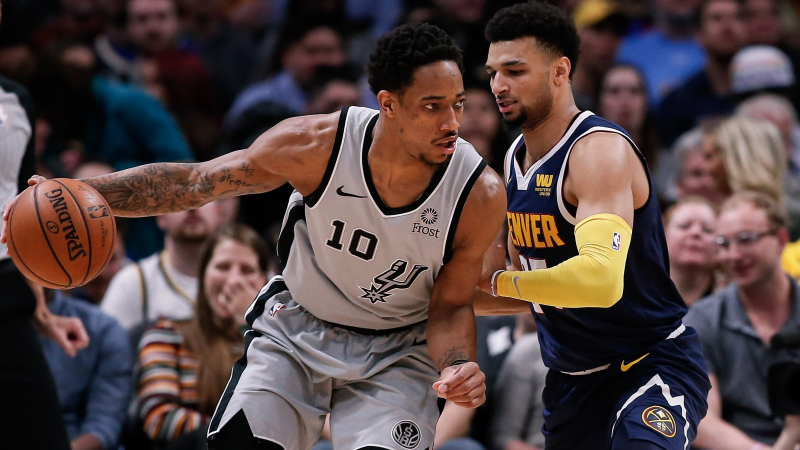 The NBA Playoffs start today, and the closest matchup on the slate is between the San Antonio Spurs and the Denver Nuggets. According to Vegas, this is not quite your average 2 vs. 7 matchup like we have in the East with the Raptors as -1200 favorites in the series. In this one, we see that the Nuggets are just -250 to win the series. -250 is a significant number, but it’s nowhere near an assumed lock. Now, I believe that this number is relatively disrespectful of the Nuggets and we will talk about why a little late, but we should see a competitive series.

Spurs Had a Bland Season

The San Antonio Spurs’ season was relatively bland compared to last season. They really did not have major injury issues throughout the season with their clear two best players, Demar DeRozan and LaMarcus Aldridge, dealing with minimal health concerns all season long. They did deal with a longer-term injury from Derrick White, who I believe is a good young point guard, but this loss did not have a drastic impact on their regular season record. Rudy Gay could be an X-factor in this series because he has been in and out of the starting rotation and the lineup in general due to different health problems. I suspect we see a significant amount of Rudy Gay in this series, which is actually my biggest concern for my Nuggets support. Gay is still a really talented scorer and 33 minutes of Rudy Gay would really benefit the Spurs offense if he can handle that physically.

The Denver Nuggets were probably the most impressive team in the regular season to me. The Bucks had a fantastic regular season, and the Raptors and Warriors also had better records, but that’s not exactly what I am referencing. The Nuggets dealt with missing half of the season from Will Barton. Gary Harris missed 35 starts. Paul Millsap missed 12 games. Jamal Murray missed 7 games, which doesn’t sound like a lot but this was along with all of these other guys out. These injuries were all at the same time, where they are playing 2 or 3 new starters at a time. This team never really missed a beat. They only lost 4 games in a row once in early November. They won games while missing multiple starters regularly and they are incredibly deep. I think this depth is fantastic in a playoff series that can present different matchups and different needs.

These two teams played 4 times and split the series 2-2 in the regular season, but here are the Nuggets‘ starting lineups in the first 2 games: Murray, Craig, Hernangomez, Plumlee, Jokic. Again, that’s missing THREE starters vs. the Spurs ideal lineup, and the Nuggets even won one of those two games. This goes to show just how deep the Nuggets are. The other thing is that the Nuggets overused their depth in the regular season, and Mike Malone has specifically said they plan on using 8 guys in a regular playoff rotation. My best guess for this rotation Murray, Harris, Barton, Millsap, Jokic, Morris, Plumlee and then either Craig or Beasley given the matchup. Craig as seen as the defender while Beasley is a more explosive scorer. I absolutely love this idea for the Nuggets because it means that we will see a little more of Plumlee and Morris than we have seen in the regular season and I think those two should be starting on a really good NBA roster. I think this team has 7 above average NBA starters and I think this will be showcased in this series.

The spread on this game is -5.5 in favor of the Nuggets, and I just think that the Nuggets come out firing in this game. The Spurs had a lot of fun trying to stop Jokic early in the season with certain matchups, but I don’t think they can focus on Jokic as much as they need to when the Nuggets are at full strength. I like the Nuggets here -5.5 to really make a statement in game one.