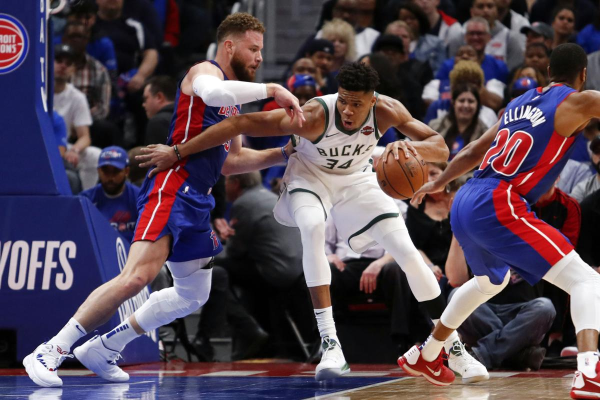 The Milwaukee Bucks were heavy favorites entering their first-round series against the Detroit Pistons, and they have lived up to that so far. Top-seeded Milwaukee has taken a 3-0 series lead over Detroit through the first three contests and will go for the sweep in Game 4. The Pistons appear to be more interested in starting a fight than winning a basketball game, but they will now be fighting to keep their season alive. Expect a loud and raucous Detroit crowd for Game 4 of the series on Monday night.

Milwaukee was able to use their home-court advantage to storm out to a 2-0 series lead over the Pistons. The Bucks absolutely dominated the first two games of the series, and Detroit did little to respond on their home court in Game 3. The Pistons got behind early to the Bucks and wound up losing Game 3 by a score of 119-103. Detroit will have to go back to the drawing board and try to find a strategy that can keep them in the game long enough to win it at the end.

The Bucks are -10.5 point favorites over the Pistons in Game 4 of this best-of-seven series.

The Detroit Pistons were a top-10 defensive team during the regular season, but they haven’t looked like it so far in this series. Detroit allowed just 107.3 points per game this season, but have failed to keep the Bucks under 119 points so far in any game thus far.
The Bucks are shooting better than 50 percent from the field so far, and the Pistons need their big men to do a better job of protecting the rim. Look for Detroit to try and use some pressure defense to keep the ball out of the scoring zone for a longer period of time.

The Pistons got Blake Griffin back into the lineup in Game 3, and he gave the team a huge boost. Griffin led the team with 27 points in the loss, but their All-Star center had a terrible game that canceled that out. Andre Drummond had just 12 points on 5-14 shooting from the field and really struggled to find his rhythm. The Pistons will need both Griffin and Drummond to have great games if they are going to even the series.

Bucks Have Plenty of Depth

The Milwaukee Bucks are one of the deepest teams in the NBA, and that was extremely evident in Game 3. Seven different players scored in double figures in the victory, with Khris Middleton leading the way with 20 points. The Bucks were the highest scoring team in the league during the regular season, and they have not slowed down in the postseason. Milwaukee is averaging 120 points per game in their first three victories of the series.

Giannis Antetokounmpo might be the MVP of the NBA this season, and he has been terrific so far in leading his team. The “Greek Freak” is averaging 25.0 points and 14.5 rebounds per game in this series and has done a great job of dealing with the physical play from the Pistons. Milwaukee is also getting the job done on the defensive end of the floor, giving up over 100 points just once in the series.

Even though Detroit was back at home in Game 3, they really didn’t put up much of a fight. Expect that to change in Game 4 as the Pistons will be fighting to keep their season alive. The Bucks are going to win this series, but Detroit will extend it for another game. Take the +10.5 points and bet the Detroit Pistons over the Milwaukee Bucks in Game 4.