NBA Playoffs Betting Odds: Raptors, Wizards Trending Up, But Is There Too Much Faith in the Pacers and Warriors? 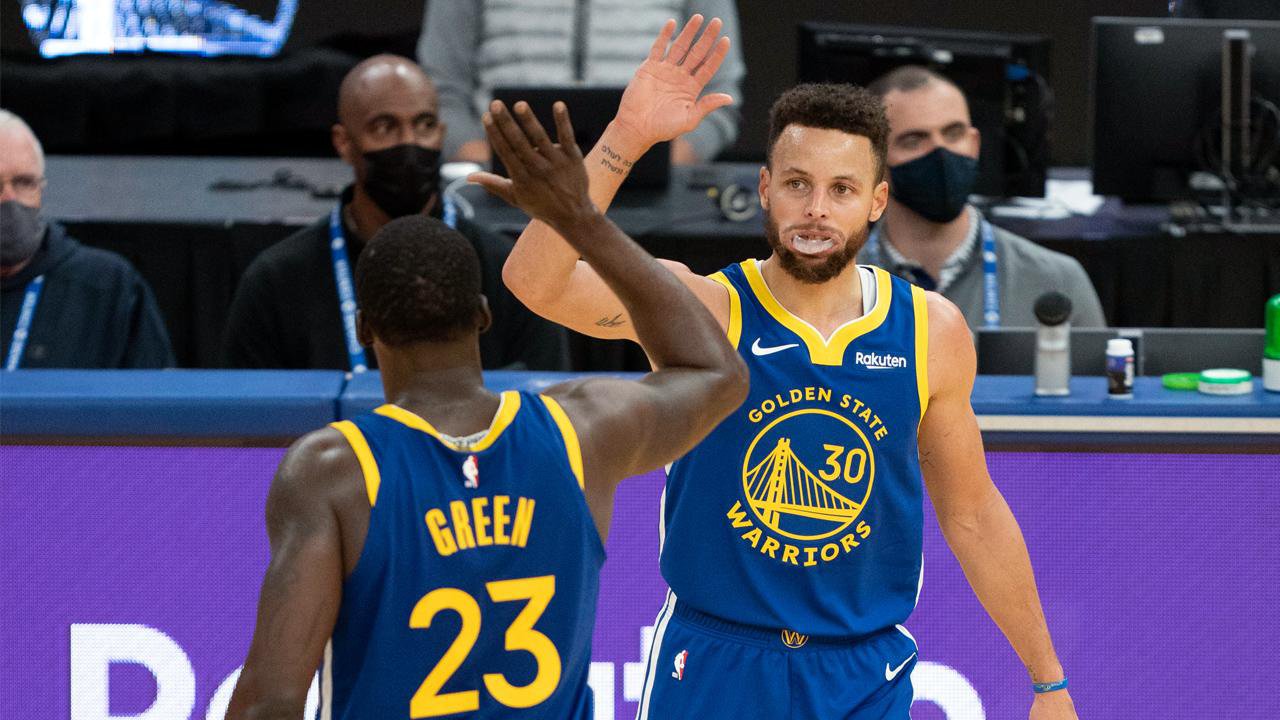 Normally at this time of the year, we’d be knee-deep in NBA playoffs betting, but this year, there are still a few more weeks of regular-season action to go before the postseason starts.

With a little over three weeks to go in the regular season, we can lock only five teams in. The Utah Jazz, Phoenix Suns, Los Angeles Clippers, Philadelphia 76ers, and Brooklyn Nets are all certain NBA playoff teams. Others, like the Denver Nuggets, Los Angeles Lakers, and Milwaukee Bucks, should be in with no sweat, though the Lakers’ hold on at least the fifth seed in the West is a little shaky for the time being.

But with the new play-in tournament leaving guaranteed spots for only the top six seeds in each conference, the stretch run of the regular season will have a lot of teams sweating, clawing, and fighting for their playoff lives.

In the Eastern Conference, the top three have some breathing room, but things are a mess below them. Fourth through tenth may not be decided until the last few days of the regular season. The New York Knicks currently sit fourth, but the Miami Heat, who are currently seventh, are only a game and a half behind. Meanwhile, the Charlotte Hornets, who are eighth, are only three and a half games ahead of the Toronto Raptors, who are 12th in the East.

Odds aren’t available for every team in the mix, but here’s a rundown of all of the teams involved. All NBA playoffs betting odds are via FanDuel Sportsbook. For NBA betting odds for every game along the stretch run and into the NBA playoffs, check out our NBA odds page.

The Hornets initially thrived without LaMelo Ball and then without Gordon Hayward as well, but they’ve hit the wall recently. Since going 7-3 SU in their first 10 games without Ball, the Hornets have lost six of their last seven games. At one point, they were in the thick of the mix for the fourth seed, but they have played their way out of that race for now.

However, Ball was medically cleared earlier this week after initially being ruled out for the season. His impending return could help propel the Hornets ahead of the other contenders. Malik Monk, who averages 13.1 points per game, could also be back soon, which would be a further boost to a team that has been held under 100 points four times in seven games.

Gordon Hayward’s return is less certain, but a return for the final few games of the regular season could be massive.

The Pacers haven’t been above .500 since mid-February, and they have won three games in a row only twice this season. They are not at full strength at the moment, with Myles Turner out and Domantas Sabonis and Doug McDermott both having been sidelined for games this week. What they could be at full strength is the reason for their favorable odds, but their play throughout the season doesn’t warrant it.

There’s a lot more than can be said about the Pacers and their chances, but it is difficult to believe in this team. Nine of their last 14 games are at home, which should be good, right? It would be for many other teams, but the Pacers are 10-17 at home this season.

The Knicks have given themselves some separation from the likes of the Hornets and Pacers with an eight-game win streak, and they are also now a game and a half ahead of the seventh-placed Heat.

The wheels could still fall off for the Knicks, but it’s starting to look like this isn’t just some temporary upswing. The Knicks have been one of the NBA’s top defensive teams all season long, but the offense is doing its part during this winning streak, averaging 118.4 points per game.

That the Raptors are here after their years of success is disappointing, but the fact that they are here after all of the challenges they have faced this season is not. The Raptors are not at home, were decimated by COVID issues around and after the NBA All-Star break, and have dealt with injuries, trades, and trade rumors.

Now that they are here, don’t count them out. The Raptors have won four in a row, and they have championship experience that could be invaluable down the stretch. And while they lost a weapon in Norman Powell to the Trail Blazers, they did gain Gary Trent, Jr., who also has the ability to put up points in bunches.

At seven games behind sixth, they are not going to catch up in that race. But they or the Wizards could catch up for eighth or ninth if the chips fall the right way. If the Raptors do reach the play-in tournament, their title winners give them an edge over the likes of the Pacers and Hornets.

Current NBA Playoffs Betting Status: If they reach the play-in tournament, strong buy. Until then, small buy. +610 is excellent value for a team that has the horses that they do for this race.

Perhaps it was only a matter of time before a team with Bradley Beal and Russell Westbrook would finally start winning games, but the Wizards are rolling at the right time. They have won six in a row and eight of nine, and they have inched ahead of the Bulls and Raptors for tenth.

Can they stay there? At this juncture, the answer would be yes. The schedule lines up rather favorably. They have several decisive games against fellow playoff hopefuls, but their schedule is light on unfavorable matchups. There is a home game against the Los Angeles Lakers next Wednesday, which they will fancy themselves in even with Anthony Davis back for the champs. And then there is a road game against the Milwaukee Bucks on May 5 is the only legitimately bad matchup.

Like the Raptors, if the Wizards get into the play-in tournament, it will be tough to bet against them. They don’t have championship experience, but they have a duo in Beal and Westbrook that is tough to match.

The Hawks, who are 18-7 under Nate McMillan, suffered a scare when Trae Young injured his ankle Wednesday night. But Young looks unlikely to miss more than a few games, which should not derail the playoff push.

Nine of Atlanta’s last 13 games are at home, which is notable. The Hawks are a respectable 16-11 at home for the season, but that includes an ongoing stretch that currently sits at 10-2. Additionally, the Hawks and Pacers are the only two teams in that race for fourth through tenth to have a .500 or better road record.

The Celtics have been unpredictable this season, but their talent is shining through as they hit the stretch run. They have won nine of their last 11 games, and the fourth seed is well within their reach. A visit to Madison Square Garden to face the Knicks in their regular-season finale could decide the fourth seed.

The Nikola Vucevic trade was supposed to help propel the Bulls up the Eastern Conference standings, but it has not. But after falling a season-worst 11 games under .500, the Bulls have woken up a bit. They have won three of their last four games heading into a three-game road swing against the Heat and Knicks.

Zach LaVine has missed the last five games due to the league’s health and safety protocol, and the Bulls are 3-2 without him. His return, which will likely come after the road trip, will be welcome, however. If they can avoid losing more ground on their road trip and then get LaVine back, look out for them down the stretch. Making the postseason could impact if LaVine is a long-term Bull, and that could light a fire under them.

The Heat may have lost three in a row in a recent Western road trip, but they’re on the right track. They are 9-4 in their last 13 games, turning a losing record into a winning record.

A late four-game stretch featuring two games at Boston, one at home against Philadelphia, and then a trip to Milwaukee could determine if the Heat avoid the play-in tournament. It will help the Heat immensely if those games are not important for the 76ers or Bucks.

The Warriors are on track for the play-in tournament, but they wouldn’t be there were it not for Steph Curry. And Curry is the reason why the Warriors are still worth backing to reach the playoffs proper. In an elimination game, you have to expect that he will deliver, even if he has to put the team on his back and score 50 or 60 points.

The Spurs have played above expectations this season, but look at their remaining schedule. It does not make for good reading.

Home: vs Philadelphia, vs Milwaukee, vs Phoenix twice

Away: at New Orleans, at Washington, at Miami, at Boston, at Utah twice, at Portland, at Brooklyn, at New York

The only saving grace for the Spurs is that the Pelicans can’t be trusted to go on a run. It’s tough to see this Spurs team downing the Mavs, Warriors, or Blazers in the play-in tournament, but never, ever count out any Gregg Popovich-coached team.

Unfortunately for NBA fans and NBA betting enthusiasts, the NBA playoffs could very well end up without one of Steph Curry, Luka Doncic, or Damian Lillard.

The Mavs have an excellent chance to ensure that it won’t be Doncic. There are some tough games down the stretch for Dallas, but they get the Lakers and Nets at home. And there are two games apiece against the Kings and Cavs, along with single games against the Pistons and Timberwolves. The Blazers have a tougher schedule. With that in mind, the Mavs are the better shout for the sixth seed for now.

If the Grizzlies can navigate that stretch with a .500 or better record, their chances of navigating the play-in tournament look far, far better. It’s not impossible, either. They won at Milwaukee against Giannis and the Bucks last Saturday, and they almost won at Denver on Monday.

For now though, it’s likelier that they end up on the outside looking in after the play-in, just like they did last season. The Blazers, Mavs, and Warriors all having a star who can pour in 50 if the need calls for it is a difference-maker, and so is the former having a star sidekick (McCollum for the Blazers, Porzingis for the Mavs). Ja Morant and the Grizzlies are not quite there yet.

This year will not be the year, but next year could be. They will need to go on a run to throw themselves in the race down the stretch, and that does not look likely with this year’s squad.