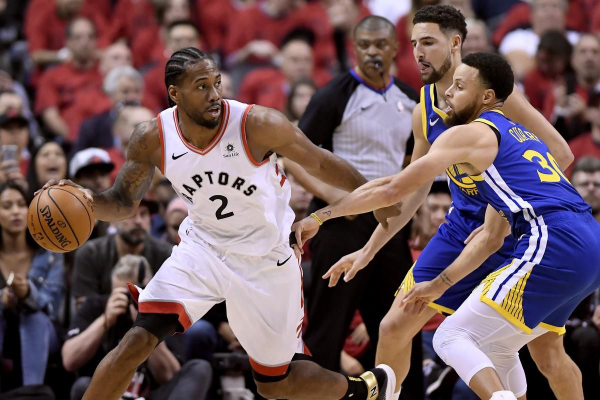 The Golden State Warriors are back in Oracle Arena for one last game in their home arena before moving across the Bay to the brand new Chase Center next fall. Kawhi Leonard and the Raptors are looking to celebrate the final NBA Finals victory in this building, heading into this game with a 3-2 lead in the series. The Warriors are -2.5 point favorites in this game, which is about what the line has looked like in recent games, giving favor to the home teams on either side.

The Golden State Warriors will be without Kevin Durant from this point forward, following his ruptured Achilles tendon in the second quarter of Game 5 in Toronto. Golden State’s Kevon Looney is the only other player on either team that has injuries surrounding him heading into this game. Looney has a non-displaced cartilage fracture in his ribs. Supposedly, this injury will not get worse if he continues to play through it, but he is clearly in severe pain.

If I had to guess, Looney will be listed as available for this game. However, I do think there is definitely a path to him being limited due to his injury. He can barely lift his arm over his head, which is a problem for an NBA basketball player.

If Looney does not play, it will boost DeMarcus Cousins’ minutes, along with Andrew Bogut’s. I would expect to see more Draymond at the 5, and we could even see Jordan Bell make an appearance for defensive purposes. I think that the Warriors should attempt to go small as much as possible, especially when Ibaka or Siakam play the 5 instead of Gasol.

Draymond Green seems more comfortable in that role, and it improves their defense at the top end. I think that Klay has the best defense on Kawhi and that was very evident towards the end of Game 5. Klay was draped on Kawhi after his 10-point outburst in the fourth quarter, and he really made everything hard on Kawhi in the last minute or two.

I think that Quinn Cook is probably the best option in that scenario because he is the best offensive player. When the Warriors have gone small, you see a lot of pressure on Klay and Steph because the other three guys on the floor don’t create efficient offense for themselves. I think Cook is the guy most likely to be a threat to the defense if Draymond is at the 5.

If I am the Raptors, my style of play in this game depends on how well Boogie is playing. If Cousins plays like Games 2 and 5 instead of Games 3 and 4, I think that the Raptors should try to get him off of the court by using more three-guard lineups with Kawhi and Siakam. This won’t really help them drastically on either end, but I think the Raptors want to keep as many offensive threats off of the court as possible.

If the Warriors do use more Quinn Cook, this would be a good matchup for two of Lowry, VanVleet, and Danny Green. However, I think that Danny Green has proven that he doesn’t take advantage of matchups. If he is open, he shoots. If not, he passes. This is how he plays basically regardless of the defender’s talent level. I would use Iggy on the more aggressive VanVleet or Lowry, depending on which one is playing better at any given point.

Overall, I think that this game should again come down to which team executes at a higher level. I think that the Warriors have coasted this entire season besides Games 5 and 6 vs. Houston and towards the end of Game 5. They were still playing sloppy and loose early in this season. It is not that easy to flip the switch, and I am really curious to see if the Warriors can do so here. I think that they do and win this game, but I think the value is in the Raptors +2.5. My favorite bet here is Warriors’ moneyline, but this series has been so close that I would not risk betting on the spread in favor of the favorite moving forward.