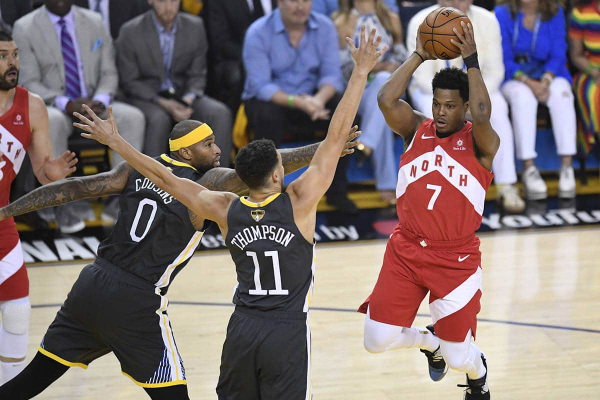 The Golden State Warriors are back in Toronto after dropping both games at home vs. the Raptors in the NBA Finals. Kawhi and the Raptors have a commanding 3-1 series lead and will look to close out Golden State in Game 5 before heading back to the Bay Area. The Raptors are -1.5 point favorites in this matchup, which has a lot to do with the mysterious injury status of Kevin Durant.

As of this posting, Steve Kerr has said that Kevin Durant went through shootaround and that he looked good doing so. The Warriors now list Kevin Durant as a game-time decision, which shows that he is seemingly really close to returning. The most notable comment that was said might be when Kerr said that Durant would not have his minutes limited if he does play. I think this is a pretty telling comment, and I think that this means that Durant will likely play.

If there are no minute-limit concerns from the Warriors medical staff, I think that means that they believe he is ready to go. The game-time decision notion is likely more of a formality because they want to make sure that this recent increase in activity doesn’t change how his calf is reacting. If I had to guess right now, I have Durant as about 80-20 or maybe even a little more likely than that to play.

If Durant does play, I do expect the line to close closer to even. I think that the line is projecting him in a similar way as “likely to play.” I am confident enough to say that I would likely jump on this line as if KD IS playing right now, and not wait until the official word, even though it is not a guarantee.

How does Durant change the series? I think this is the most interesting aspect to look at tonight, as I think he changes the series drastically. I believe that we would see the least amount of Marc Gasol that we have seen all series. We would see more Draymond at the 5, matched up with either Siakam or Ibaka, depending on how much we see the Raptors run three guards if the Warriors play small.

The Raptors want to have Lowry, VanVleet, and Green out there a significant amount of time, and the Warriors running smaller will allow that. I expect to see a lot of those three along with Pascal and Kawhi. The other option is to run a bigger lineup with Ibaka in place for one of the guards and slide down Pascal and Kawhi to the 4 and 3, respectively. I think both lineups will be used in this matchup, with the guard-heavy lineup getting the most run.

DeMarcus Cousins can become more of a luxury than a contributor. In Game 2, we saw Boogie have a great game and contribute a lot to the Warriors offense. In Games 3 and 4, he really looked gassed and out of place. I think that the Warriors will continue to start Boogie and move Iggy to the bench to start the game. The difference now is that if Cousins struggles, they will have more people to turn to for offensive production.

My last point on the addition of Durant is the defensive scheme that the Warriors have been running. I think it’s horrible, and it’s not really their style. They have done WAY too much helping in the series by attempting to trap and double some Raptors players. This has turned Fred VanVleet and Danny Green into much better scoring options.

The Raptors have shot much better than they should in this matchup, and I believe that it is because the Warriors are not as confident as they should be defensively. If KD returns, we may see the Warriors defend as they should. Let Kawhi try to score 50 on a good defender like Klay, Iggy, Draymond, or KD. They are doubling and trapping to no avail, and this is also allowing these non-factors like Green and VanVleet to get wide-open looks.

I like the Warriors here +1.5 if they get Durant back, which I assume they will. I think this will force Toronto to play a style that they are less comfortable with, and it will help the Warriors speed the game up. I love the Warriors here, and I think they take control of this game early and never let the Raptors back in.