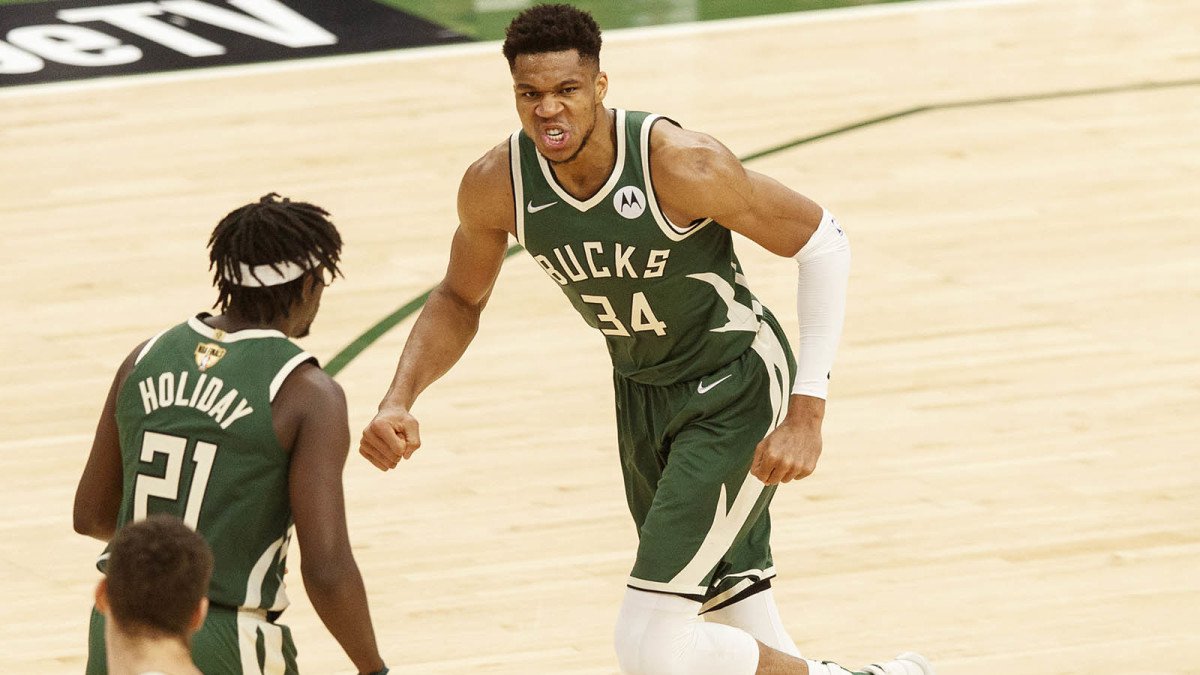 If you watched Game 3 of the NBA Finals on Sunday, you might recall that the Suns were leading by three points at the end of the first quarter and that the broadcasters said it was a “perfect first quarter on the road”. Things fell apart pretty quickly after that leading to a relatively easy win by the Bucks. We now have a series, that’s for sure.

With Giannis producing big numbers, the Bucks have to be very confident they can even up the series. The Suns still have a series lead, but there has to be some concern heading into Game 4, especially with the way that Devin Booker struggled in Game 3.

Suns Looking for Major Rebound Performance on the Road

Things definitely changed on the road for the Suns in Game 3. Whether it was the change in environment or not, guard Devin Booker could not find the range. He made just three shots and sat a good chunk of the second half. I am not sure it will make any difference in terms of rest/fatigue, but it was the smart play. He was giving them nothing, and the game was out of hand at that point.

In Sunday’s 20-point loss, it is hard to find many positives for Phoenix. Forward Jae Crowder finally made some shots in the series. He scored 18 points, his second-highest total in the playoffs. I don’t think they need his scoring all that much, but they need him to at least be a threat on the floor because his intangibles help so much.

The other starting forward, Mikal Bridges, was a difference-maker with 27 points in Game 2. In Game 3, that total dropped to just four points. That is a massive dip, but he also led the starters with a -1. So he is not useless out there even though the counting stats are not there. More than four points would help though.

Phoenix is still up in the series, so there is no reason for any major strategic adjustments, other than trying to figure out how to stop that Giannis guy. Few have figured it out outside of Toronto and Miami though.

It is definitely no surprise that the Suns are underdogs yet again on the road. However, they have not lost back-to-back games since the series against the Lakers.

Momentum With Milwaukee After Game 3 Rout

For the second game in a row, Giannis was the best player on the floor. He once again scored over 40 points and was efficient in every part of his game, including at the free-throw line. It is pretty amazing the way he has moved from potential injury absence to MVP candidate. He just might be a superhero after all.

With Giannis dominating, the Bucks did not need as much from the likes of Jrue Holiday and Khris Middleton. Holiday had his best game of the Finals, scoring 21 points with 9 assists. He made half of his threes, helping to create space inside for Giannis. Middleton was not nearly as efficient, but scoring 18 points without heavy usage plays well when Giannis is on his game.

Other than riding his stars a little longer than was needed due to time and score, it is hard to find much fault with coach Bud and the approach for the last game. They only really went 7 deep, but that is playoff basketball. Even though he did not start, big man Bobby Portis matched Brook Lopez in points and was an amazing +19 in just 18 minutes. At home, the Bucks might not have to reach into their “bag” too much for Game 4 either.

The Bucks got the easy win and cover in Game 3. All of the games in this series have seen the home team win and cover. Will that trend continue tonight?