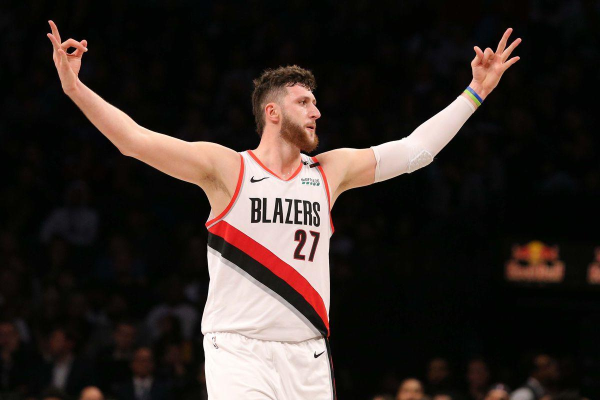 The Brooklyn Nets are in Portland to take on Damian Lillard and the Trail Blazers in a big matchup for playoff seeding. The Trail Blazers are in 4th place in the Western Conference, just 1 back of 3-seeded Houston and 2 games ahead of the Clippers in 5th. I think the Blazers would like to maneuver their way into a first round matchup with the Clippers instead of the Thunder or Jazz if they could, but I think that starts with winning now. If they have to punt a few games late to drop, that is much easier than winning 5 straight. The Nets are in sixth place in the East, but they are only trailed by 2.5 by the Magic, who are on the outside looking in right now. This final stretch will be very tight to see which teams will sneak into the back half of the Eastern Conference playoffs. 5 teams are within 2 games of 8th place, which should only get more intense.

Nets Looking to Add Another Win

The Nets are relatively healthy with their only notable injury being Allen Crabbe. Crabbe is a solid role player, but he is likely overutilized in Brooklyn and I believe that this forces more Russell, Dinwiddie, and Levert onto the court, which is only a good thing. I expect the Nets to see no noticeable hit with this loss. The Nets have won their last 2 games after losing their previous 3 to Western Conference Playoff teams. The Nets are 6-0 in their last 6 games vs. non-playoff teams and 0-4 against playoff bound opponents. I do think there is some relevance to this, as the Nets lack a lot of experience and interior players that most playoff teams have. This is a guard-heavy game, but the lack of any consistent post-scorer does really hurt vs. the likes of StevenAdams and Rudy Gobert. Even guys like Javale McGee and Marvin Bagley have had fantastic games vs. this team recently. Their primary focus in this game must be making players other than Lillard and Nurkic beat them, which is easier said than done.

The Trail Blazers are coming into this matchup as winners of their last 3, even without one of their star players. C.J. McCollum is listed as out for this game, but the TrailBlazers haven’t really missed a beat with him out of the lineup. I think a lot of this is due to his positional skill overlap with Damian Lillard and I think they are utilizing C.J.’s skill-set less than previous years. There should never be a minute where they do not have one of these stars not on the court, but there is. I think that Lillard has just take almost all of McCollum’s usage for himself and been able to produce enough to compensate for his absence.

This small stretch has been able to show off Lillard’s ability to carry a team, but it has also shown how little McCollum is doing in a lot of situations. Hopefully, this is noticed and changed, but until then I don’t expect much to change from the Portland side. Brooklyn does not have anyone close to being able to defend Damian Lillard and JusufNurkic, which is the scary part for the Nets. I expect both of these players to have above average to phenomenal performances in this matchup, especially with the usage to go around. The rest of the Portland pieces have been rather uninspiring all season. It is possible that we see a big game from Curry, Hood, or Harkless, but I wouldn’t bet on it.

Nets Compete on the Road

This game will likely come down to the ancillary pieces showing up. If this is a star on star, I expect this to be a close game with Lillard being able to pull this game out at home. That being said, I think that 6.5 is just too much to give to the Blazers. They will need someone other than the big two to show out to secure a double-digit victory and I can’t count on that. Give me the Nets +6.5 on the road.