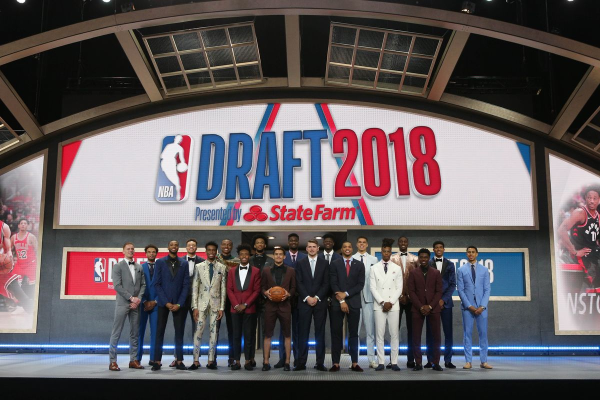 This year’s NBA Draft is now in the books and outside of a few trades there were no major shake ups or surprises. The Phoenix Suns took Arizona’s Deandre Ayton, the Sacramento Kings took Duke’s Marvin Bagley III, and Luka Doncic was drafted third by the Atlanta Hawks. Doncic was later traded to the Dallas Mavericks but that’s about as big of a news item we saw the entire night and that’s okay. Some teams addressed needs directly. Others went for building blocks while others had players fall right in their lap. Even though it will take years to verify, this year’s draft should prove to be a deep one with plenty of young talent spread out around the entire NBA.

There was little doubt where the strong players were going to go. In this era of super-teams, the bad teams of the NBA are that much worse. When some teams have two to three superstars on their roster, it thins out the talent something fierce for the bottom half of the league. Hence “The Process” although most of the teams in the lottery aren’t tanking on purpose per se. The PhoenixSuns have been bad for eight years but it’s not for a lack of trying. So, this won’t be your usually draft recap. Let’s look at this years final four teams and see how their draft improved their squad and how it will affect next year’s futures, point spreads, and championship runs.

Golden State Warriors – While the Golden State Warriors continue to win championships and show no signs of slowing down, they are also preparing for the future via the draft in an impressive manner. They have big decisions to make soon because of free agency and a trio of great players looking for max contracts. But in the meantime they have drafted wonderfully and this year’s pick of Jacob Evans is sure to fit right in. He is a versatile wing who is plays solid perimeter defense, can score from anywhere, and has an extremely high basketball IQ. There’s a reason why this sounds familiar. It’s because it describes every player on their roster. With drafts like this, the Dubs will continue to be a force in the West and for the championship.

Houston Rockets – The Rockets have sacrificed many draft picks over the last few years as they’ve chosen to build their team via trades and free agent signings. They look to continue that trend as they are one of the teams on a short list of places Lebron could end up but that remains a long shot. That said, they may have the steal of the draft in De’AnthonyMelton with the second-round, 46th pick overall. His draft stock bottomed out because the FBI but their as their investigation lead to nothing, here stands a lottery sized talent getting drafted in the second-round. Melton is a point guard by nature but as the Rockets have plenty of people to handle the ball, he will fit in quickly as another scoring option that scores and scores and scores. The Rockets’ hopes lay with the health of Chris Paul but this draft pick is a great one.

Boston Celtics –Danny Ainge andthe Boston Celtics have proven themselves to be at the top of their game in the war room and this year’s pick should only add their reputation. RobertWilliams is a monster forward from Texas A&M who somehow dropped all the way to Boston with the 27th overall pick. Another candidate for draft steal of the year, the Celtics get a big fella to back up BigAlHorford right away. If their run to a seventh game in the Eastern Conference Finals without their two best players didn’t prove how deep the Celtics are nothing will, but watch out next year because they just got deeper.