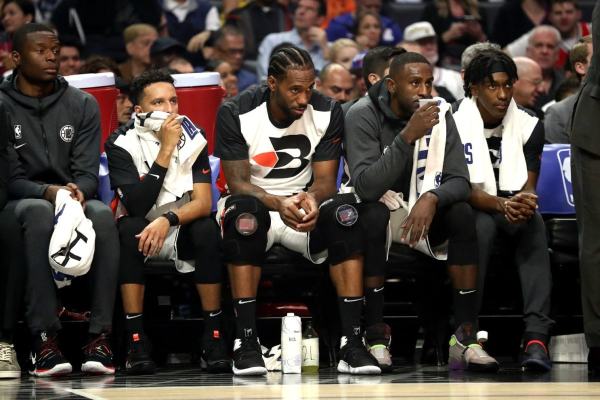 When the Clippers landed the biggest free agent of the offseason, they knew Kawhi Leonard was a proponent of load management. Now, having missed three straight as part of this load management plan, a hurt knee, or some combination of both, Leonard has played in just nine of Los Angeles’ first 14 games.

The Clippers are yet to be at full strength with Leonard’s extended absence following that of Paul George’s to start the season. However, Doc Rivers’ team seems to be doing just fine.

Thanks in part to two straight wins over the Hawks and Thunder without Leonard on the floor, the Clippers have jumped out to a 9-5 record and are 2.5 games back of the Lakers in the Pacific Division.

So, while the Clippers would love to chase down their rivals and earn the top seed in the Western Conference, it’s more or less all going according to plan for Leonard, George, and the Clippers.

In postgame interviews after the Clippers took down Oklahoma City on Monday, Rivers portrayed Leonard’s situation as day-to-day and added that his star player was very close to playing in that game. His return to the floor Wednesday would be timely, as the Clippers will face a pair of tough games against Boston and Houston over the next few days.

The Clippers Without Leonard

Los Angeles has now played five games without Leonard taking part. Most recently, they’ve had the services of George, their other prized offseason acquisition, to help lessen the burden.

Over that stretch, George has helped the Clippers to two wins and a single loss, all while leading the team with 33 points in a loss to New Orleans and 37 points in a big win over Atlanta. Against his former team, Oklahoma City, George hit a big three-pointer with approximately 30 seconds remaining, but it was Montrezl Harrell who led the team with his 28 points.

Without Leonard, Los Angeles also fell to the Jazz, 110-96, and then lost to the Bucks in a 129-124 contest. That leaves the Clippers with a record of 2-3 without their star, but they’re now more capable of winning games in Leonard’s absence with George back on the floor.

In the nine games Leonard has played, he’s led the team in scoring and assists on six occasions. Leonard has also provided the team’s highest rebound total in five of his nine games played.

Luckily for the Clippers, George has already shown that he can provide a scoring boost at any moment, as he currently leads the team with 29.3 points per game.

Are The Clippers The Team To Beat When Healthy?

Although they’ve not yet played a game at full strength, the Clippers currently own the fourth-best record in the Western Conference at 9-5.

But are the Clippers really a middle-of-the-pack squad amongst the Western Conference teams currently in control of the playoff positions?

According to the odds, the answer is no.

The two favorites to win the NBA Finals remain the two Los Angeles clubs. Right now, both the Clippers and Lakers are tied with odds of +300. Next up are two Eastern Conference teams, with Milwaukee (+550) just ahead of Philadelphia (+650).

So, while Leonard’s load management has certainly cost his team some games in this early part of the season, the Clippers remain a favorite to win it all.