LeBron, Lakers Storm Back; With Return Of Kuzma, Are They Team To Beat In West? 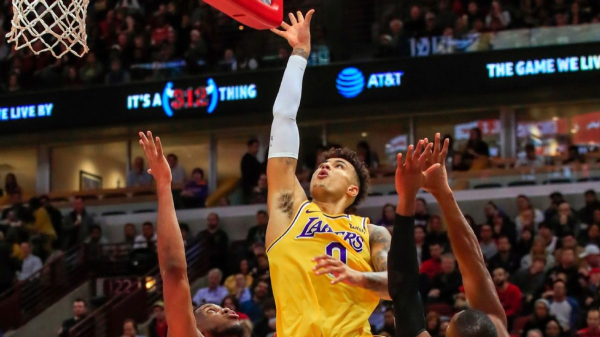 After a year without playoff basketball, the King has returned. With his third-straight triple-double, LeBron James helped the Lakers surge back from a 65-48 deficit at halftime to beat the Bulls by a score of 118-112 on Tuesday night.

Yet while James led Los Angeles with 30 points, 11 assists, and 10 rebounds, it was Kyle Kuzma who spearheaded a fourth-quarter rally from 19 points down, as the young guard scored 11 of his 15 points in the final quarter of play.

With Kuzma’s contribution, the Lakers went on a 16-0 run that earned them the lead over Chicago with eight minutes remaining in the contest. With Anthony Davis in foul trouble and LeBron worn down, it was the perfect remedy for a Los Angeles squad that looked exhausted.

Davis only managed 15 points due in large part to foul trouble, so the Lakers needed every bit of Kuzma’s 15 and Quinn Cook’s 17 points to help James and company cross the finish line ahead of Chicago.

Now, with Kuzma finding his feet after returning from injury, Los Angeles appears to have a viable third option behind James and Davis. Does that make the Lakers the team to beat in the Western Conference?

With Tuesday’s come-from-behind win over the Bulls, the Lakers have won six straight after beginning the year with a loss to the Clippers. Now 6-1, the Lakers are without company atop the Western Conference standings.

Directly behind the Lakers is a trio of teams sitting at 5-2: the Nuggets, Clippers, and Suns.

While we expected the Lakers to be a top team after the acquisition of All-NBA big man Anthony Davis, let’s take a look at how Los Angeles has been getting it done.

It’s no surprise to see Davis and James leading the team in scoring, both with just over 26 points per game. And while Davis leads the team with 10.9 rebounds and three blocks per game, James is tops on the squad with 11.1 assists and 1.6 steals per contest.

Yet it hasn’t been just a two-man show to this point.

After a huge performance in the season opener, Danny Green has cooled off to the point he’s scoring 10.6 points per game. However, he’s shown that he can still have a significant influence over a game with his proficiency from three. Thus far, Green is shooting 47.2 percent from beyond the arc.

Kuzma is now giving the team another scoring option as he works himself back into form after suffering an ankle injury during the summer, and role players are pitching in, like Dwight Howard and his 6.7 points and 7.9 rebounds per game.

It’s still very early in the season, but the Lakers are already showing flashes of a solid team capable of winning a number of ways. So, is the Western Conference theirs to win?

The Western Conference By the Odds

Despite their place atop the Western Conference standings, the Lakers have yet to surpass the Clippers as favorites to win the conference. That ranking makes sense considering we’ve yet to see the pairing of Kawhi Leonard and Paul George on the floor for the Clippers.

Oddsmakers continue to see the Rockets as the largest threat to the Los Angeles teams, giving Houston +450 odds to win the conference. We’ll have to see how the James Harden-Russell Westbrook partnership develops.

And rounding the list of teams with a shot, at least according to the odds, are the Jazz and Nuggets, both of whom hold +850 odds.