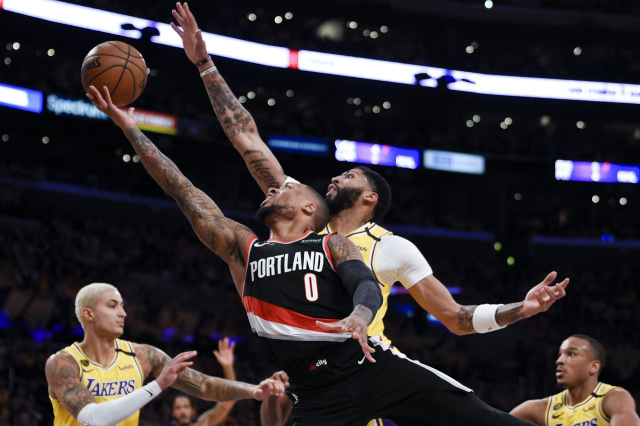 The Lakers bounced back from their game one loss by dominating Portland in game two of the first round playoff series. Now tied 1-1, the Lakers and Trail Blazers will face off Saturday night.

The Lakers are 7 point favorites after closing at 6.5 point favorites for the first two games of the series. The Over/Under has dropped from 233.5 in game one, to 229.5 in game two, and now to 225 for game three.

Damian Lillard suffered a finger injury in game two, but assured everyone he would be playing Saturday night. He didn’t return after suffering the injury, but the game was decided by that point in time anyway. He will be on the court in game three.

Rajon Rondo may return for the Lakers after missing the first two games of the series. He remains questionable, but it should be noted his initial timetable had him out much further into the playoffs. It seems unlikely the Lakers rush him back given how they’ve handled player injuries and health all season. In a must win game? Maybe. In game three? Unlikely.

It’s easy to see why sportsbooks have the total so high, as Portland is a terrible defensive team that rode their high scoring offense to a playoff appearance. In the 8 games before the playoffs, Portland was averaging 126 points per game. They know they can’t defend well, and because of that will try outscoring opponents. The problem, is that we now have two games finished in which the Trail Blazers averaged 95 points. Neither game saw them flash any of the offensive magic we’d seen prior to the playoffs.

On the other side, the Lakers scored 106.4 points per game in the 8 games before the playoffs. That number is deflated a bit by the fact that they were focused on remaining healthy because they had locked up the 1st seed.

The display the Lakers put on in game two was a clear reminder of the team they are. They entered the 4th quarter up 30 points, in a game in which LeBron James scored just 10 points. Yes, their ‘MVP’ only needed to score 10 points before they had put this one away. Anthony Davis was unstoppable, after looking a bit timid at times in game one. The fact is, Portland has no one who is a good match-up for Davis. Bringing help will be the only option besides letting him score one-on-one, and that leaves shooters open. Every trend and statistic points to the Lakers shooting more like they did in game two than in game one. Instead of evaluating the teams success shooting, you must evaluate the quality of looks they got. Expect the Lakers to be better offensively in game three than they have been in this series so far.

Further, Portland looked tired in this one. It’s not hard to see why they might be tired, either. They played 8 games in the bubble, treating every one of them as must win. As a result, they played in the play in game (which they won), before starting the series with L.A. Lillard has been seeing over 40 minutes per game every other day, with McCollum not far behind him. It looked like the Blazers need to get their legs back if they want to compete in the rest of this series.

This line is not moving enough. Portland’s wear up until this point supports the idea that they will have a hard time scoring like they had been. Add in that they are now playing an elite defensive team in every single game, and it’s hard to imagine how they could reach that 120+ mark. Further, the Lakers don’t want to beat them in a shootout. The Lakers prefer winning a defensive, slow game that Anthony Davis can dominate.

In game 2, the Blazers scored 30 points in the 4th quarter against the Lakers non-rotation players. When they were playing the actual rotation, they scored the following points each quarter.

Elite defense by the better team in the series, combined with Portland’s extreme minutes over the past few weeks, make me confident in this game being under 220, let alone 225.

If you want to bet on the game, find the best sites and the best lines in your state on our page about US betting sites.