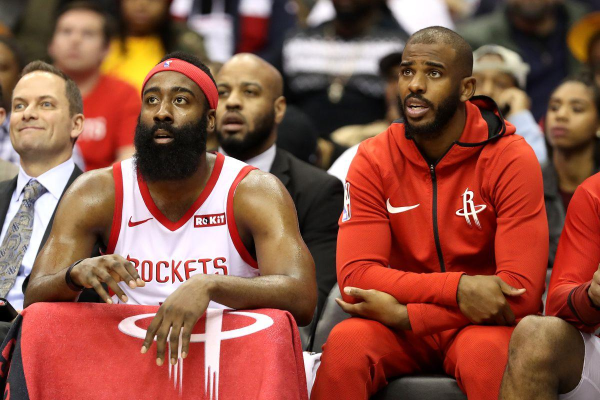 The Houston Rockets head to the Bay area to take on the Golden State Warriors on TNT tonight. James Harden has suddenly thrown his name back into the MVP conversation after stellar games night in and night out since Chris Paul has been out. Now, with Eric Gordon out as well, Harden will have to do even more of the heavy lifting for the Rockets to continue to stay hot.

The Rockets have won their last 5 and 10 of their last 11, which is incredibly impressive, especially when one player is doing the majority of the damage. Harden’s usage % over this period is over 42%, and he is assisting almost 50% of the shots taken as well. He is the point man for every single thing this Rockets team has done recently.

The Warriors are 4-3 in their last 7, including home losses to the Lakers and Blazers. This Warriors team has really struggled to get in a groove all season, and I think that this is the spot where they need to step up and do so. If Harden can waltz into Oracle and steal a game from the Warriors, a lot of people will be talking about the end of the Warriors tomorrow.

The Rockets are extremely short-handed, as I mentioned above. Obviously, James Harden is doing basically everything he can to will them to a victory. His supporting cast is not very good, and they are also not the most consistent bunch outside of Clint Capela. Capela has been on a tear recently with 4 monster double-doubles in his last 5 games. If this can continue against the Warriors, it will give Harden the second player necessary to staying with Golden State.

The Warriors have struggled with bigs recently, with guys like Nurkic and DeAndre Ayton having really big games against them. If Capela can put up a 20/20 game here, the Rockets are going to be much better off because he is really their second option. The fact that Clint Capela, who has really no offensive game besides being an athletic big, is the second tells us all we need to know about the rest of the Rockets. P.J. Tucker will play 38 minutes and defend a combination of Draymond Green and Kevin Durant, but it’s extremely unlikely that he does much of anything from an offensive standpoint unless the Warriors double team Harden and Tucker gets hot after a few open looks. Austin Rivers is probably the Rockets second most talented scorer, but he barely knows the system and often just defers to Harden like everyone else.

The Warriors are an interesting team right now, with the struggles of Klay Thompson and Draymond Green at the forefront. Klay Thompson is shooting 34.4% from three-point range this season. That is tied for 103rd with Reggie Jackson out of 144 eligible players. This is an issue for Golden State, but he is shooting 40% in his last 5 and may have turned a corner. We can’t expect Klay to shoot this poorly forever, but it is a concern.

Now, Draymond Green doesn’t qualify for the 3-point % rankings because he doesn’t take a lot and he has had a few injuries as well. If he did, he would be 3% worse than LAST. That’s an issue. In his career, Green shoots 32.4% from 3. Is that good? No. Is that a guy that you constantly give wide open shots to? Probably not. Not only can Draymond not shoot, but teams are daring him to shoot with wide open spaces. He still misses over 75% of his attempts. This has all overshadowed how good Steph Curry is offensively this season. Steph is shooting 46% from 3 on the 6th most attempts in the league after missing about a month of the season. Not only is he shooting way better than every other volume shooter, but have you seen the shots he takes? These shots are often incredibly difficult compared to the “average 3,” but it doesn’t seem to matter.

The spread on this game is the kicker because I was hoping to get a smaller number with a red-hot Houston team and a struggling Warriors team. I’m not, but I am going to stick to my guns with the Warriors here. There are 3 games tonight. They are on national TV. I think the Warriors have to flip the switch here for a little bit just to quiet the noise for a while. This is the perfect time to do so. Give me the Warriors (-8).