Golden State Loses Big In Opener; Warriors In Danger Of Missing Playoffs In 2020? 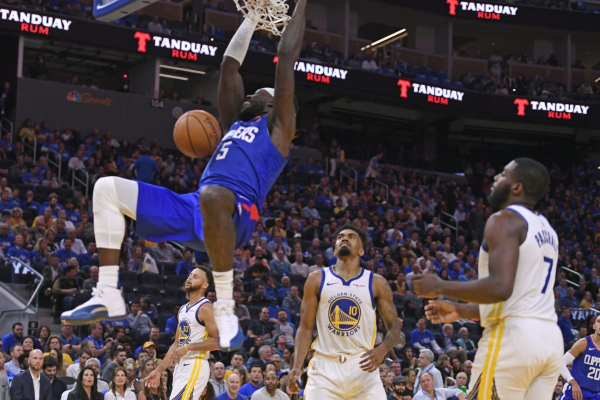 Warriors Embarrassed in Home Opener, Draymond’s Hurt, and Steph has Eight-Turnover Game. Is it Panic Mode for the Dubs?

In sports, everyone has the hottest takes, based upon whatever it is they just witnessed. One game into an 82-game season, and miraculously, everyone has a Magic 8-ball that says, “Outlook not so good,” upon shaking it and asking, “Are the Warriors going to make the playoffs this season?”

Here’s the thing: The Magic 8-Ball is a toy, and there’s a reason why the Warriors played so poorly in their opener. They played probably the best team in basketball in the LA Clippers, fresh off an impressive win over the highly-touted Los Angeles Lakers. The Clippers won easily, 141-122.

Something that should be noted: The Warriors might as well be an entirely different basketball team. For nearly a decade, they have had the luxury of maintaining a supremely deep and talented roster. A roster that helped propel Stephen Curry to superstardom and made the Warriors a household name in modern sports.

While people’s overreaction to this embarrassing obliteration at the hands of the Clippers is understandable, overreacting to what you just saw is one of the biggest mistakes sports fans and prognosticators alike make.

The Warriors have some issues, but this is still a team that can compete for a playoff spot, and here’s why.

Missing Klay Thompson hurts a lot, especially if you’re a team that’s already depleted of talent that served unquestionably valuable roles off the bench. No more Andre Iguodala, Kevin Durant, and others means that the weight is falling on players the Warriors are still getting the hang of.

Draymond Green, while still a tremendous rebounder, facilitator, and presence on defense, is largely a black hole on offense. Without Klay, the Warriors “obvious” options for scoring have been simplified.

Rather than having to avoid trapping or doubling Steph on screens, the threat of an open Klay Thompson is not as apparent, meaning teams can really sniff out and hone down on Curry. It’s going to take time for this roster to figure out each other’s capabilities, preferences, and importantly, maintain the resolve and hunger that continually made them one of the best teams in the league.

In danger of missing the playoffs altogether is a logical leap to make if you’re a Warriors fan, but frankly, it’s way too premature. The year the Warriors won their first title with Durant, they were embarrassed and trounced in their home opener at the hands of the San Antonio Spurs, in a contest that very easily fielded tremendous (and oddly similar) overreaction from many fans.

Teams have bad nights, and Thursday night, the Warriors had a bad night. Obviously, this could foreshadow ongoing problems for this squad, but it’s far too early to outright assume they are going to miss the playoffs, because, despite the shift in talent and depletion of the roster, the Warriors are still a bluechip commodity in the NBA.

Throughout the game, Draymond was clutching his right arm, with speculation being it could be a muscle strain or some other kind of injury. Draymond has a lot of time to recover and overcome the injury, while it is worrisome given how razor-thin the Warriors’ depth presently sits at, but in recent years, Draymond has proven to be an ironman of sorts, playing through pain and not letting it be an excuse for mediocrity.

Given that just about every player in the league suffers damage from wear-and-tear throughout a given season, D’Angelo Russell and Steph should be able to figure out one another’s way of playing in conjunction with Green. Together as a trio, they can do their best to replace the output of Klay, who is rumored to be possibly making a return sometime later this season, despite prior reports stating there was no chance Klay suits up for the 2019-20 season.

Warriors fans shouldn’t be worried yet. This is a team that is too talented and too prideful to wallow in mediocrity, so while they may not go far in the postseason, look for the Warriors to snag a six to eight seed come next spring. No Magic 8-Ball needed.