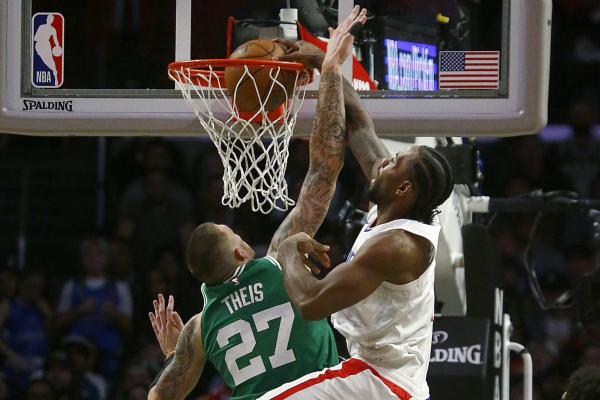 The Kawhi Leonard-Paul George era has officially begun for the LA Clippers. With both players missing time through the first 14 games of the season, it wasn’t until Game 15 on the Clippers’ schedule that the Los Angeles team could witness both of its stars on the court at the same time.

The occasion wasn’t to be lessened by the level of competition, either, as the 11-2 Boston Celtics were coming to town. The Clippers would eventually improve to 9-1 at home and 10-5 overall with a 107-104 win, but it took more than 48 minutes to do so.

A tightly contested game throughout the first three quarters saddled Los Angeles with a six-point deficit heading into the fourth quarter. A 28-point performance sent the game to overtime, where the Clippers used three three-pointers to earn the victory.

While the game wasn’t the cleanest Los Angeles has played thus far, Clippers fans will be happy to see the Leonard-George partnership begin with an impressive win over a good opponent.

The two Clippers stars combined for 42 points, 11 rebounds, and 11 assists in the game, but it was Lou Williams who led the team in scoring with 27 points from the bench.

Why the Leonard-George Duo Gives Clippers A Unique Advantage

After one of the most enthralling offseasons in NBA history, a league that was previously obsessed with the “Big 3” paradigm suddenly shifted to a newfound league full of star duos. Making it all the more interesting is the fact that some of the sport’s biggest names were changing teams while the Warriors dynasty was falling apart.

And so, we’re now left with an NBA landscape featuring All-Star pairings leading many of the teams we expect to compete for the title.

We have the LeBron James and Anthony Davis partnership with the Lakers. On the back of a banner year for James, the Lakers have jumped out to a 10-2 record while both star players are scoring 25 points per game.

In Houston, we have a pair of ball-dominant guards who can score at will in James Harden and Russell Westbrook. Thus far, Harden has been playing at an MVP level by averaging 38.4 points a game to lead the 11-4 Rockets.

Then there’s Joel Embiid and Ben Simmons in Philadelphia, Pascal Siakam and Kyle Lowry in Toronto, and even Luka Doncic and Kristaps Porzingis in Dallas.

However, no duo has what the Clippers have. With Leonard and George, the Los Angeles club can boast perhaps the two best two-way players in the NBA.

And when you add Patrick Beverley into the mix, the Clippers suddenly turn into a defensive juggernaut with the ability to guard anyone on the perimeter.

This is one of the more wide-open seasons in recent NBA history, as no dominant Golden State, Cleveland, or Miami team is there to ruin everyone else’s party.

When it comes to winning the NBA Finals, teams sporting All-Star duos hold four of the five best odds.

With Harden and Westbrook, the Rockets own +750 odds of winning it all. Just ahead of Houston is Philadelphia, which sits on +700 odds with Embiid and Simmons at the helm.

The Bucks come in third with +550 odds, but we all know that Milwaukee is powered by Giannis Antetokounmpo.

And finally, we reach the top two teams, both in Los Angeles and both led by the strongest duos in the NBA. Both the Lakers and Clippers are favorites to win the NBA Finals with odds of +300, which means we could be in for a Leonard-George versus James-Davis showdown in the Western Conference Finals.