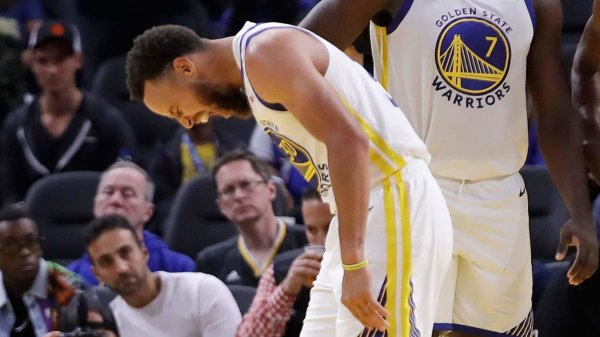 A 121-110 loss to the Phoenix Suns wasn’t the worst thing to happen to the Golden State Warriors on Wednesday night. While driving to the basket and taking a hard fall between two defenders, Stephen Curry suffered a broken left hand.
According to reports, the injury is a fracture in the second metacarpal, which is the bone below the index finger.

Although there was no malicious intent involved in the play, the result now robs a struggling Golden State team of its star player in the midst of a rough start. Curry will undergo an MRI and CT scan to determine the severity of the injury before any timetable for a return is put in place.

For a Warriors squad that’s started 1-3 and sits above only winless Sacramento in the Pacific Division standings, the loss of Curry could mean an early end to the team’s playoff hopes. Without Curry and Kevon Looney, who’s out with a neuropathic condition, on the floor in the near future, head coach Steve Kerr will have to navigate a difficult early schedule, with the Spurs, Hornets, Blazers, and Rockets coming up next.

So, the team that’s dominated the NBA and been in every NBA Finals since 2015 now finds itself in the midst of the draft lottery discussion.

The Dying Dynasty In Golden State

With devastating injuries to Klay Thompson and Kevin Durant in last season’s playoffs, the dynasty in Golden State seemed to fall apart right before our eyes as the Warriors were seeking a fourth championship in the last five years. In the end, the Raptors won the NBA Finals in six games, and the Warriors are now in shambles.

For a team to go from perennial contender to a lottery contender is unheard of, but that could be a reality for a Golden State team that’s had a very tough few months.

First, Thompson suffered an ACL injury that’s likely to keep him out for most of this season, and even a return in the second half could be much too late to make a meaningful difference for Golden State’s playoff chances.

Then, after suffering an Achilles injury that sidelined Durant during the playoffs, Golden State’s best player decided to leave the Bay area in favor of a move to Brooklyn.

Now, after Curry’s broken hand, Draymond Green is the only star player still standing from a Warriors dynasty that ruled over the NBA for half a decade.

So, what should the expectations for this Golden State team be?

With the loss of Curry, a two-time league MVP, a significant dropoff is inevitable for a team that most already assumed would struggle to contend in the Western Conference. But for a team that’s competed in the last five NBA Finals, how bad could it really get?

When the season began, the Warriors were by no means a favorite to reach the Finals once again. While teams like the Clippers and Lakers had odds better than +500 to win it all, Golden State started with odds of +1400 to win the title.

Now, with the extent of Curry’s injury unclear, the term “longshot” would be a generous one to give Golden State after watching their championship odds freefall to +5000.

The worst thing this Warriors organization could now do is flounder around in the middle of the Western Conference without a chance of competing for anything significant. So, don’t be surprised to see Golden State trade D’Angelo Russell and go from Western Conference champs to a team tanking for lottery position.