Hayward Out Six Weeks; Celtics Look For Next Man Up In East 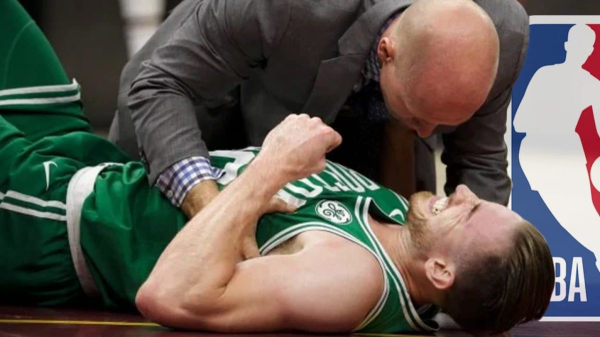 Boston forward Gordon Hayward was off to a blistering start that helped the Celtics earn an 8-1 record at this point in the season. Now, after successful surgery on his hand, Hayward is set to miss six weeks to recover.

It’s easy to feel bad for Hayward, who’s had to deal with more than his fair share of injuries thus far in his career. And just as the productive forward was returning to some of the best form of his career, an injury to the fourth metacarpal bone in his left hand once again sends him to the sidelines.

The injury occurred in a 20-point win over the Spurs on Saturday when Hayward collided with LaMarcus Aldridge. During Monday’s win over the Mavericks, the Celtics announced Hayward’s successful surgery and the preliminary recovery timeline.

The good news for Boston is that they’ve been able to gain an early lead in the Atlantic Division standings thanks to an eight-game winning streak. With a record of 7-3, Toronto is the closest team to Boston within the division.

The obvious bad news is that the Celtics will now have to find a way to replace Hayward’s productivity until he comes back, with a top seed in the Eastern Conference on their list of goals.

On paper, the Celtics have one of the most complete rosters in the NBA. Yet while Boston employs the talents of Kemba Walker, Jaylen Brown, Jayson Tatum, and others, it might be Hayward who makes the biggest overall impact on the team.

Strong offseasons of rehabbing and practice have paid off early in this 2019-20 NBA season for Hayward. Through eight games, Hayward has averaged 18.9 points, 7.1 rebounds, and 4.1 assists per game.

Hayward has also been efficient while compiling those numbers. Including his 43.3 percent shooting percentage from three, Hayward is shooting 55.5 percent overall.

Now, the Celtics will have to work hard to limit just how much they’ll miss Hayward over the next six weeks, and that starts with Marcus Smart, who started in lieu of Hayward in Boston’s 10-point win over Dallas Monday evening.

Smart played 37 minutes in that contest and recorded 17 points and six assists on his way to a +13 plus/minus. On the season, Smart is averaging 11.1 points, 3.2 rebounds, and 4.7 assists per game.

In the end, 29 points from Walker and 25 points from Brown were enough for Boston to top the Mavericks, but the Celtics struggled at the points of the game in which Hayward would normally lead the offense.

With Tatum taking over that role at the start of the second and fourth quarters, the Celtics struggled while Tatum made just one of his 18 shots from the field.

So, can the Celtics survive Hayward’s absence and maintain their standing at the top of the Eastern Conference?

At this early stage in the NBA season, the 8-1 Celtics hold a 1.5-game lead over the 7-3 Bucks and 7-3 Raptors for first place in the Eastern Conference. Behind Milwaukee and Toronto are the Heat and 76ers, both of whom have a record of 6-3.

According to the odds, Boston’s toughest task without Hayward will be keeping the Bucks and 76ers from overtaking them atop the standings.

With odds of +160, Milwaukee is the current favorite to win the Eastern Conference. Following closely behind is Philadelphia, which owns +200 odds of reaching the NBA Finals.

An open Eastern Conference figures to feature a season-long battle for the top seeds going into the playoffs, so Boston will need to find a way to keep up with Milwaukee and Philadelphia while Hayward is out.