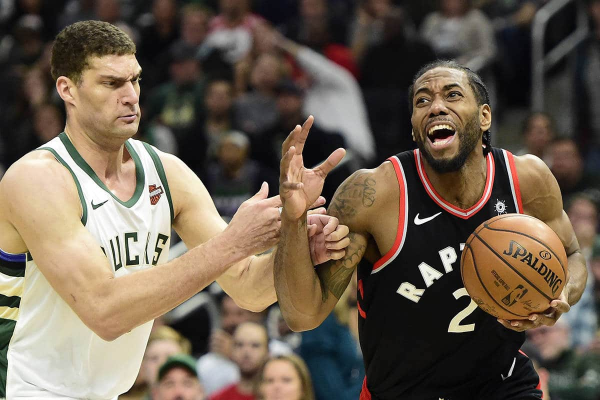 We have another 2-0 series lead for the visiting team in Game 3 with the Milwaukee Bucks taking on the Toronto Raptors in Scotiabank Arena. The Bucks came from behind in Game 1, then took that same mentality into Game 2, jumping out to a large lead early and never letting the Raptors back in. Toronto is a 2.5-point favorite, the same as Portland was last night in a very similar situation.

The NBA Playoffs are all about adjustments, and I am struggling to see a lot of adjustment in this spot for the Raptors. The interesting thing about this series is that neither team really attempts to attack and exploit matchups, or even hide people in certain situations. In a lot of NBA games, we see a lot of teams set screens and get switched onto the best possible matchup before they even start the set. This obviously makes a lot of sense, and that is something we see teams like the Warriors and Rockets do a lot of.

The Bucks and the Raptors really don’t do this as much as other top teams, and that presents the opportunity to make these things happen. The Bucks are long and athletic defensively with Bledsoe, Middleton, and Giannis starting at the 1, 2, and 3. They also have Brogdon and Hill off the bench to provide good defense vs. guards and wings.

Brook Lopez is a solid shot blocker, and he is not someone you particularly attack on defense. The best matchup for the Raptors lies with Danny Green, who is seeing a lot of Nikola Mirotic. Mirotic has defended Green on 27 possessions per game in the series, more than twice as much as anyone else. The issue with this is that Danny Green wouldn’t be able to take advantage against a 10-year-old, or at least he plays like that is the case.

The biggest problem that the Raptors have run into is that they have someone on the court that is basically a non-threat, which allows them to hide a purely offense-based player to stay on the court. Now, if needed, the Bucks could play Brogdon to prevent this big mismatch, but at least they could take one player out of the game.

Like I mentioned earlier, Brook Lopez is a fine defender, but he’s not shutting down Marc Gasol at all. If Gasol can play 30 minutes and score 15 points while providing a good post presence to deter Giannis, it will go a long way.

Pascal Siakam has the tough task of facing Giannis, and he REALLY struggled in Game 2 with six fouls in under 30 minutes. Pascal needs to play like round 1 and 2 Siakam to get the Raptors a win.

Toronto Gets A Win

I like the Raptors in this game because I think they have underperformed from expectations. I would probably take the extra juice on the moneyline here, just to avoid the close game heartbreak, but it’s not a must.

Now, here is a nice little stat that I do think I will try to attack in this game. When the home team is down 2-0 in the series, they are 27-6 on the first half spread in Game 3, just like what we saw with Portland last night. I think the Raptors should jump out to the lead early and then attempt to hold off the Bucks in the second half.