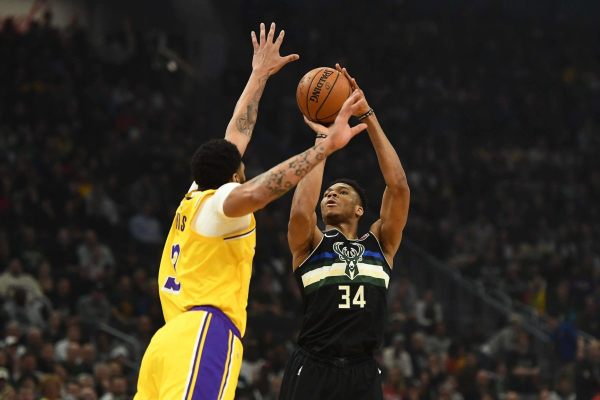 Happy Holidays! This Christmas Day, the NBA will take center stage with a five-game schedule going all day long. One of those games is a potential Eastern Conference Finals preview, with the Milwaukee Bucks (27-4) taking a trip to Pennsylvania to visit the Philadelphia 76ers (22-10).

Here is a preview for Wednesday’s game, along with odds and a free pick.

The Bucks have the best record in the NBA, slaying the Lakers last week and winning 21 of their last 22 contests. Milwaukee leads the NBA in points with 120.6 per game on 48.2 percent shooting. The Bucks average 14.3 threes per game, third in the NBA, while leading the league in rebounds per game, most of which are coming on the defensive end.

And speaking of defense, Milwaukee also cracks the top 10 in points allowed with 107.1, holding opponents to a league-worst 41.4 percent from the field. The Bucks are also averaging 8.1 steals and 6.2 blocks per game. Overall, the Bucks have the best record in the league and the stats back that up across the board.

Meanwhile, the 76ers have bounced back from a three-game losing streak last week, winning their last two games in convincing fashion. Philadelphia is only 17th with 109.8 points per game but scores on the third-best rate of 47.6 percent. While they make less than 11 threes a game, the 76ers are top 10 in three-point percentage at 36.3 percent. The Sixers also rank fifth in assists per game with 26.6.

Philadelphia is one of the best defensive teams around, giving up the third-fewest points per game with 104.9. It’s also the only team in the NBA holding opponents to under 10 threes a game. The 76ers are second in steals with 8.6 and average 5.9 blocks per game, making them a team that is firmly in the top 10 of the NBA this season by most metrics.

For the Bucks, it’s all about the Greek Freak. Giannis Antetokounmpo is having another MVP-caliber season, averaging 31 points, 12.9 rebounds and nearly six assists per game. While he has always been great at driving to the basket, Antetokounmpo has taken a huge step forward in his three-point shooting this year, hitting over 34 percent from beyond the arc.

Giannis is the focal point of a team that also has All-Star-caliber players like Khris Middleton and Brook Lopez, making the Bucks arguably the most dangerous team in the league.

The 76ers are a team that has a number of stars as well, but none bigger than Joel Embiid. The skilled center is averaging 23 points and 12.6 rebounds per game, putting up 20 double-doubles in 26 games this season. Embiid is a threat from inside the paint and as an outside shooter as well, making him one of the more versatile players in the league.

He’s joined by Ben Simmons and Tobias Harris, giving the Sixers a lengthy group of players who size up well against any team.

The Bucks are being given a slight edge going in, listed at -1 to beat the Sixers on the road. Both teams are fairly healthy, with only Eric Bledsoe of Milwaukee and Matisse Thybulle of Philadelphia ruled out.

To me, this game will be won by the Bucks for two reasons. Number one, their league-high pace and offensive efficiency will have trouble being matched by a team that likes to slow it down.

While Philadelphia is a good defensive team, it has shown some cracks of late as well. Second, the depth of Milwaukee gives it an edge against anyone, with a myriad of shooters who can keep the offense going even when Antetokounmpo needs a breather.

So all that being said, while this game will be fun and competitive, I think it’s Giannis and the Bucks who prevail on Christmas. Give me Milwaukee -1.