Five Christmas Day NBA Games: Will We See The 2020 Champions In Action? 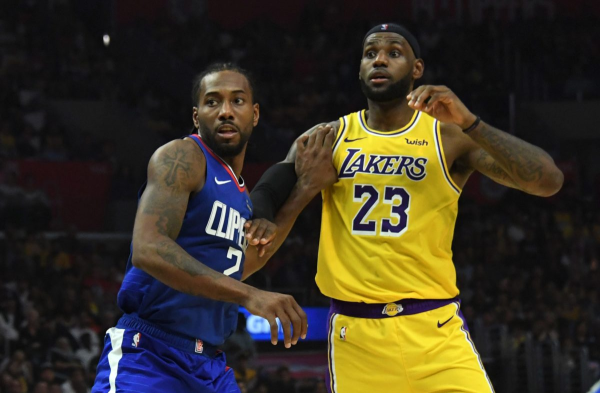 Get your holiday festivities out of the way early on Christmas Day, because a packed slate of big-time NBA games starts at noon Eastern.

Do you want to see a stacked Boston roster take on the defending champs? What about the reigning MVP going into Philadelphia to take on Joel Embiid and company? Or maybe you’re waiting for a rematch between the two Los Angeles clubs.

No matter what you’re looking for, the NBA likely has it in store for you as eight of the top nine teams in the league will take the court.

Will we see the eventual 2020 NBA champs in action? Let’s take a look.

This first matchup of Christmas Day features two of the top four teams in the Eastern Conference. While the Celtics are 18-7 and the Raptors are 19-8, both are five games back of the 25-4 Bucks.

So, who has the edge?

The Raptors have also won three in a row and four out of their last five and own a home record of 11-3, while the Celtics are just 8-6 on the road.

Two games stick out on the Christmas Day schedule, and the 25-4 Bucks going into Philadelphia to take on the 20-9 76ers is certainly one of them.

In addition to featuring the team with the second-best odds to win the Eastern Conference (+260 Philadelphia), this contest will show off the odds-on favorite to win both the conference and NBA Finals.

At +100, the Bucks lead the race to win the Eastern Conference. And at +300, Giannis Antetokounmpo and company have moved ahead of the Lakers (+320) and Clippers (+320) as favorites to win the NBA Finals.

Fresh off a big win over the Lakers, Milwaukee has a chance to prove that it’s the cream of the NBA crop if it can hand Philadelphia its second home loss of the season.

A matchup that would have had NBA fans drooling over the past couple of years now feels like more of a formality, as the 19-9 Rockets take on the 5-24 Warriors.

On the bright side, the Rockets (+600) own the third-best odds of winning the Western Conference behind the two Los Angeles teams, and they own the fifth-best odds (+1200) to win the NBA Finals.

As we watch this game to see how many points James Harden can score, expect Houston to be a big favorite at Golden State as the Warriors own a record of just 2-10 at home.

In a likely preview of the Western Conference Finals, the 21-9 Clippers will take on the 24-5 Lakers. When these teams face off, four of the top 10 players in the league will be on the floor.

This must-watch game is for Los Angeles supremacy, as both the Lakers and Clippers own odds of +190 and have separated themselves from the pack as the favorites in the Western Conference.
However, that’s just the tip of the iceberg.

While neither LeBron James or Kawhi Leonard’s team is the favorite to win the NBA Finals, they’re both tied for the second-best odds at +320.

James and company will be looking for revenge after falling to the Clippers in the first game of the season, and they’ll have a great chance to realize that vengeance with Anthony Davis back on the floor after recovering from an ankle injury.

While this game could have packed a much bigger punch with Zion Williamson on the floor, it will still feature a Nuggets team that owns the seventh-best record in the NBA at 18-8.

As far as the odds go, Denver should start being taken seriously as a contender.

In the Western Conference, the Nuggets and their +850 odds trail only those of the two Los Angeles teams and Houston. And when it comes to the NBA Finals, Denver owns the sixth-best odds (+1800) to win it all.

This should be another lopsided affair, as the Nuggets are 12-3 at home and won’t be fearing a Pelicans squad that’s only won three games on the road so far this season.

In any case, Christmas Day will feature seven teams with top-eight odds of winning the NBA Finals, including the three heavy favorites. So, yes, it’s fair to say that we’re almost certainly going to be watching the eventual NBA Finals champions on Christmas Day.