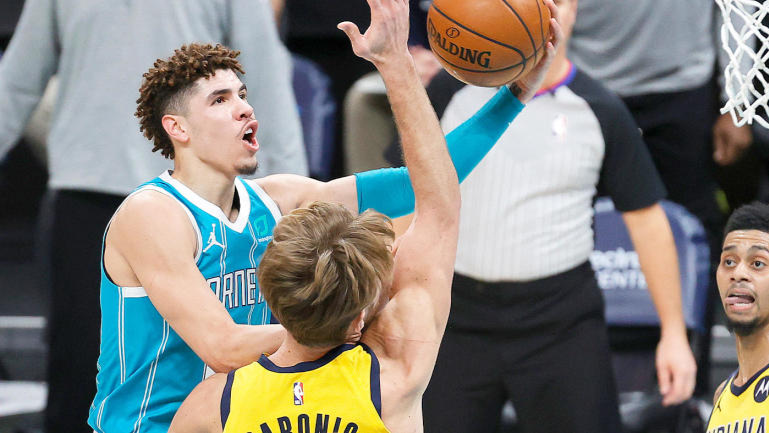 Into uncharted waters we go, as the NBA’s play-in tournament opens tonight with Hornets vs Pacers kicking off the action in the Eastern Conference.

Neither team enters the postseason on an overly positive note, but this is an opportunity to shake poor form. The Pacers are favored to advance and face the loser of tonight’s Wizards vs Celtics matchup for the #8 seed. But after a rough run at home this season, should they be trusted?

The Hornets stunk it up down the stretch, but this is still a major accomplishment after some rough years. Will that inspire a big performance tonight?

Let’s take a look at the matchup and the betting angles to consider as the NBA postseason begins.

Hornets vs Pacers odds are via FanDuel Sportsbook as of Tuesday, May 18 at 12:15 pm ET. For more NBA betting odds, check out our NBA odds page. It features updated odds from FanDuel and other top online sportsbooks.

Even if their season ends tonight, it’s been a positive season for the Hornets. They were not expected to be here, yet here they are with a chance to reach the first round.

That said, their regular season finish was awful. After a road win over the Milwaukee Bucks on April 9, they were a season-high three games over .500. That win could have been a catalyst for a strong finish, but it wasn’t. Instead, the Hornets lost 15 of their last 21 games to go from 27-24 to 33-39.

It’s no doubt disappointing to go from being in the mix for the #4 seed to falling to the #10 seed. But to be in the postseason for the first time since 2016 is a big step in the right direction. And tonight’s game is an opportunity to shake off the poor finish and further add to the progress that has been made.

A big part of that progress is heavy Rookie of the Year favorite LaMelo Ball. After breaking his wrist against the Los Angeles Clippers in March, it appeared that he would be out for the season. But he healed up and returned to action at the start of this month. The Hornets went only 3-7 after he returned, and he struggled with his shot. He shot only 38.4 percent from the field, 24.4 percent from three, and 66.7 percent from the free throw line. But if there is an occasion to step up, it is tonight.

Unfortunately for the Hornets, Gordon Hayward remains out due to the foot sprain that sidelined him for the final 24 games of the regular season. That news is unsurprising, but it is still a significant blow. Hayward’s ability and postseason experience would have been huge in this game.

Will There Be Motivation for the Pacers?

This is a legitimate question, given what we have seen from the Pacers for much of the season. Also, there have been reports of friction with first-year coach Nate Bjorkgren, and his tenure could be over soon if the team’s season ends tonight.

So will we see inspired basketball tonight from the Pacers, or will they play like they’re ready to be done?

Who is available could have an impact. Myles Turner remains out, as does Jeremy Lamb. Meanwhile, Malcolm Brogdon, Justin Holiday, Edmond Sumner, and Domantas Sabonis are all listed as questionable. It is worth wondering what this team would be were injuries and absences not such a big part of their season. But they haven’t been at or above .500 since late February, and injuries are certainly part of the reason why.

The Pacers get to host this matchup by virtue of finishing ahead of the Pacers, but will that be an advantage for them? Not really, considering that they were 13-23 at home in the regular season. Indiana ended the regular season with six losses in their last eight home games, though their two wins came against two playoff teams in the Hawks and 76ers.

A Generous Line for Hornets Backers?

As a result, the Hornets should like their chances to come out on top tonight, even after their own struggles down the stretch. They have already won at Bankers Life Fieldhouse this season, as they downed the Pacers 114-97 on April 2. That was the game in which Hayward sprained his foot, but the Hornets still claimed a comfortable win with Hayward limited to 19 minutes and Terry Rozier making only six of 23 shots.

There really isn’t a lot that inspires faith in either side here, though the Hornets have the edge among spread picks for tonight’s tilt. That said, were the Pacers facing any other postseason team in this situation, they would almost certainly be a home underdog. But not only are the Pacers favored here, the spread has moved favorably for them. For now, it is back to 3 after going from 2.5 to 3.5 this morning alone.

The San Antonio Spurs (14-22 at home) are the only other postseason team with a losing record at home, for what it’s worth. But if you must back the Pacers, their list of injury concerns makes it unwise to back them until it is certain who is available.

If there is anything that might be worth a substantial play, the total is it. The totals in the three head-to-head meetings this season were 222, 213, and 211. Yet neither team is a great defensive team, and a scrappy borefest feels counter to what should occur here. But live action is the way to go there, as the first several minutes could be telling.