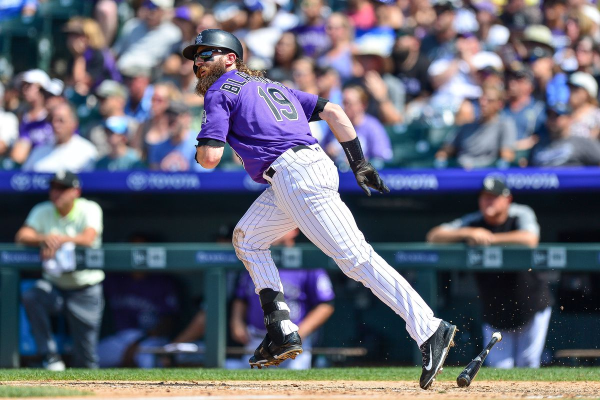 Well, here we are, the last weekend of the Major League Baseball regular season. Of course, there are still a few playoff spots up for grabs and plenty of intriguing storylines to follow. Let’s get caught up on everything you need to know about the final weekend of the season.

No Place for That

Sadly, we have to begin with the news about Cubs shortstop Addison Russell, who’s currently on administrative leave because of allegations of domestic abuse. His now ex-wife Melisa published a blog article last week detailing some of the abuse she suffered while they were married. MLB actually had an ongoing investigation dating back to the summer of 2017 when a friend of Melisa’s intimated on an Instagram post that Russell had abused her. Nothing came of it because Melisa declined to participate.

However, it seems she is now ready to cooperate with MLB’s investigation. Russell’s stay on administrative leave has been extended through the end of the regular season, although it would be shocking to see the Cubs activate him for the postseason.

Seems We Have An Opening

There are two teams that created a managerial vacancy over the past week. Oddly enough, both seem somewhat amicable. First, the Rangers fired Jeff Banister after four seasons. Banister led the Rangers to AL West titles in 2015 and 2016, but things have not gone quite as well the past two seasons. The Rangers are apparently looking for a “different voice” as they move toward a rebuilding phase.

The BlueJays will also be looking for a new manager after announcing a mutual breakup with John Gibbons, who took Toronto to the ALCS in both 2015 and 2016. Gibbons was not fired nor did he resign. Instead, both sides mutually agreed to move on from one another. The Blue Jays are also heading toward a major rebuild. However, they have one of the best farm systems in baseball, so things look quite promising for them in 2020 or 2021.

The Yankees got a scare last weekend when shortstop Didi Gregorius tore some cartilage in his wrist while sliding headfirst into home plate. His status for the end of the season and the postseason was in question. However, Gregorius received a cortisone shot and was able to return to the lineup Friday night. As long as he can avoid a setback and deal with a little bit of pain, Gregorius should be fine for next week’s Wild Card Playoff against Oakland, which is a huge sigh of relief for the Yankees.

The Braves are unsure if shortstop Dansby Swanson will be with them when they begin the NLDS next week. Swanson left a game earlier this week with a hand injury. He was subsequently diagnosed with a partially torn ligament in his left hand.

As of Friday night, the Braves were pleased with his progress in just a few days. However, Swanson is not yet out of the woods. He’s likely to take batting practice on Monday or Tuesday, and that will go a long way toward determining if he’s ready to play in Game 1 of the NLDS next Thursday. If Swanson can’t make it back for the postseason, utility man Charlie Culberson will continue to fill in for him as Atlanta’s shortstop.

Only Half a Player

The Angels officially announced this week that two-way sensation Shohei Ohtani will undergo Tommy John surgery next week. The surgery will likely keep Ohtani from pitching at all in 2019. However, he’s confident that his elbow rehab won’t prevent him from serving as a DH next year. After hitting .280 with 21 home runs in less than 350 plate appearances this year, Ohtani could be a difference maker as a full-time DH next season. The only caveat is that it would force Albert Pujols to spend more time playing first base since Ohtani wouldn’t be able to play the field.

Aside from the Braves clinching the NL East, nothing about the National League playoffs is set in stone just yet, making for a crazy weekend. The Cubs, Brewers, and Rockies have all clinched a playoff birth but not their division. Chicago is a game up on Milwaukee with two games to play while the Rockies lead the Dodgers by a game with two games left to play. Meanwhile, the Dodgers are two games up on the Cardinals with two games to play, so they still need another win to secure a wild-card spot.

Meanwhile, it’s possible that both the NL Central and NL West could require a one-game playoff to determine the division winner if the two teams in contention finish with the same record. The winner of such a game would claim the division while the loser would then play in the official Wild Card Game. Also, if the Cardinals force a tie with the Dodgers, those teams would require a one-game playoff to determine the second wild-card spot. Confused? Don’t worry, it’ll all get decided on the field.