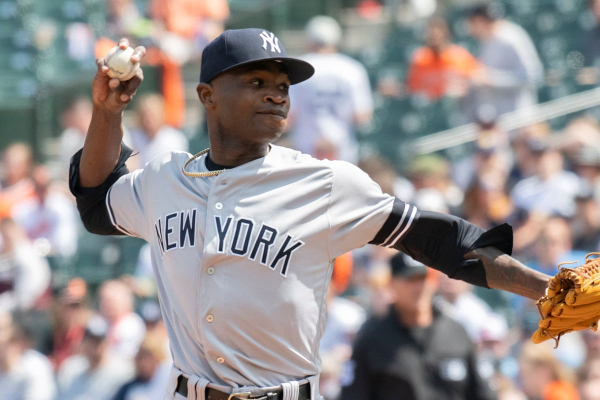 It’s a Tuesday during the MLB season, which means we have another massive slate on the board today. Fourteen games tonight should provide a lot of options, almost overwhelmingly so. I want to attack the pitching on this slate because that is the biggest key to the slate. There are a lot of bad pitchers facing great offenses to attack, but those are rather easy to find.

My favorite two pitchers in the top end are Caleb Smith and Domingo German, not Kershaw, Verlander, or Greinke. Some of that has to do with the overall name value between these guys and what I think will be a lack of respect they get in these spots, along with the matchups and price discount off of Verlander. If you can fit JV into your lineup, go for it, but I want to save a little while still capturing the upside in an elite arm. German and Smith face the Orioles and Tigers, respectively. Both pitchers have elite strikeout stuff against bad offenses, and I think that at least one of them will post a top three score on the board, if not both of them.

Just below these top arms, we have German Marquez, who is too talented for his matchup/price. Marquez plays half of his games in Coors Field and is now traveling to Pittsburgh to play in one of the most pitcher-friendly parks in baseball. The Pirates aren’t a strikeout-heavy team, but they aren’t an imposing lineup, and I think taking an elite arm is worth it for this price tag.

Both Spencer Turnbull and Lance Lynn are significantly cheaper on DraftKings than they are on FanDuel, and I think that they are both in play on DK. Lynn is a pitcher that relies on seeing a lot of right-handed hitters in the lineup, and the Mariners do project to have five lefties in the lineup tonight, which isn’t ideal. Luckily, three of those lefties are Narvaez, J.P. Crawford, and Mallex Smith, so that does lessen the risk a bit. Spencer Turnbull is a fine pitcher in a park that limits power against a bad offense. The park is actually good for offense, but that means that it requires teams to string hits together, something I don’t trust the Marlins to do at all.

Below this range, there are four pitchers that I will consider if I need to save salary and I am willing to take a pretty significant risk. All three of these guys profile relatively similar from a DFS standpoint, with a little bit of a twist. The common theme here is that these are four guys that I think are relatively undervalued if this was a raw ranking of pitcher talent.

Marcus Stroman: I love Stroman as a talent, and I think he is very underrated. The obvious issue here is that he gets to face the Red Sox tonight. Stroman has the ability to pitch eight scoreless against any team in baseball in his best game, so I will consider Stroman in a tournament lineup or two.

Sonny Gray: Talented pitcher. Struggles to limit homers. In a horrible park for limiting homers. Against a good lineup with significant pop throughout the lineup. BUT remember, he’s cheap and talented.

Michael Pineda: Significantly above average stuff. Should be something like 7.7K on DK instead of $6,500, but he is notoriously blow-up prone.

Homer Bailey: Just better than most people give him credit for, and he gets to face a right-handed heavy lineup in St. Louis. The Cardinals lineup is good, but Homer has good enough stuff to have a solid outing for 6.3K on DK.

My favorite five stacks in order are:

If you want to be different: