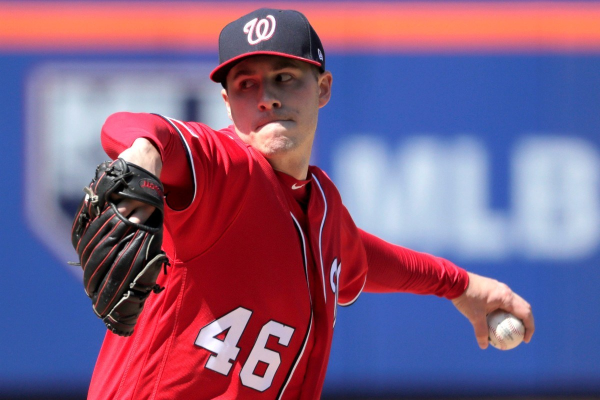 We have a nice and big 10-game slate for Saturday night with the lack of early/afternoon games. The pitching on this slate is really the biggest talking point, as it usually is, but this is due to the lack of stars on the slate. I think Patrick Corbin has borderline star stuff, but you could argue that the biggest name on the slate is Jake Arrieta, which is not super appetizing on a 10-game slate.

Like I mentioned before, Patrick Corbin is probably the most talented pitcher on the slate, but he is not in the best spot against a Phillies lineup that is pretty dangerous and also in a good ballpark for hitting. Corbin’s ability to generate swings and misses is enticing, but I’m not selling out on him today.

Rich Hill is fine, but he is likely still limited in pitch count, as he always is, and I just don’t love paying for Hill without the elite upside. He had a nice performance last start, but again, the 85 pitches is likely an optimal outcome instead of showing “upside if he goes 110 pitches” like some guys would.

The reason to play Hill is that you likely won’t see major upside from this slate in general, but the two other pitchers with a real chance with elite upside are Eduardo Rodriguez and Zach Wheeler. Both of these players have great stuff and have struggled with control more than anything in their careers. The game logs for both of these players are a perfect representation of their games, but risking the play on the upside does make sense here because of the lack of upside on the slate. If one of these guys does go off, I expect them to really give you a big advantage over the field. I do prefer Rodriguez in the matchup specifically, but both are reasonable risks.

I think Chris Bassitt is simply an ownership question. Bassitt is not some great pitcher, and he has run really well with a BABIP under .200 and a 100% LOB%, but his swinging strike rate has more than DOUBLED since last season, and he is throwing over a MPH harder. I think there is potential that Bassitt is actually much improved, and that would be a nice play in a pitchers park if he isn’t high-owned.

Lance Lynn is a viable play based on the Toronto lineup. Lynn is WAY better vs. right-handed hitters, and I would expect the Blue Jays to send out a lefty-heavy lineup. If that is the case, I would only use Lynn as a flier, but if he gets more right-handed bats than I’d expect, I will be heavy on Lynn.

Yonny Chirinos is my favorite cheap play on the slate today pretty easily. I think Chirinos is simply a good pitcher that is way better than the guys around him. Not to mention the fact that he faces one of the worst lineups in baseball. The ballpark isn’t ideal, but we can’t be too picky about these kind of plays.

One of my favorite stacks on the slate is the New York Mets vs. Gio Gonzalez. I would not expect them to be owned very much, and I think Gio is not very good right now. Gio was one of these guys that was not signed to start the season, and almost all of them have struggled. The Yankees signed him to a minor-league contract and then let him go after posting a 6.8 ERA in three starts in triple-A. Gio wasn’t bad the first time around, but the velocity was down a little less than 1 MPH, and I think we could see him blow up soon.

Coors Field is Coors Field, and I will not steer anyone clear of that park. If I see that it will be owned today way more than any other stack, I will probably avoid it for the most part. Both of these pitchers are even viable as a complete punt on DK, and I think they are better than they are given credit for. With a lot of bad teams on the slate, I don’t need to force Coors in at high ownership.

My favorite stacks besides the Mets include the Astros, Rays, Reds, and Red Sox. The Astros and Rays are both facing blow-up prone pitchers with relatively good stuff. I like them as teams with the potential to blow up the slate and hit 4+ home runs if things go their way. Banuelos, who faces the Red Sox, is just a slightly below average pitcher facing a good offense, and Rodriguez doesn’t have anything in his arsenal that scares me.