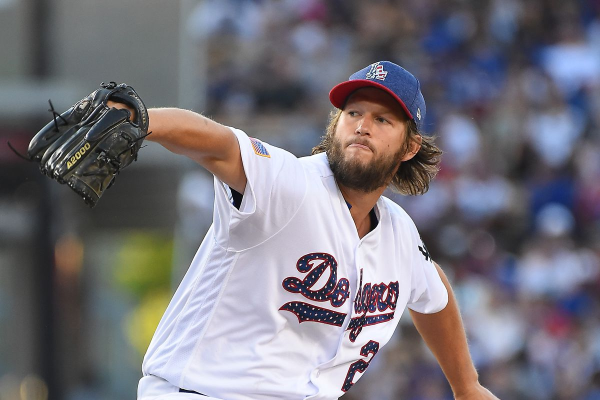 A full 15-game slate is on tap for Tuesday night. We have a ton of options, both on the mound and at the plate, to choose from. This slate sets up really nicely for someone that likes to be different at pitcher because I don’t see a lot of clear chalk options to look at on the mound. That allows us to take a slightly different approach than the masses, which is always nice to do organically.

At the top end of pitching, we see two of the best pitchers over the last 10 years in Justin Verlander and Clayton Kershaw. I give Kershaw the advantage over JV in this spot, simply due to the matchup. Verlander’s matchup with the Reds isn’t really scary, but he is in a hitter-friendly park. Kershaw gets the Giants, one of the five worst offenses in baseball, and I think that that is being generous to them. Kershaw is slightly cheaper than Verlander on most sites, so I like what seems to be an easy spot for Kershaw tonight.

If we go down the board a bit, we see Jack Flaherty, who might be my favorite SP1 on the night, along with another option I will mention next. I don’t think I want to load up on pitching over bats tonight with a lot of bad pitchers toeing the rubber, so this range will allow me to attack good offenses with additional salary. Flaherty has underperformed my expectations this season, but he is still a really talented pitcher who faces the Marlins. The Marlins offense has been pesky, but they are not scary, and I would be really surprised to see Flaherty have a bad outing here.

Patrick Corbin is a really strange case of a pitcher with elite talent that has really struggled in his last few starts. Corbin has been really bad in his last two outings, even if we look at advanced stats. The good news is that the strikeout stuff hasn’t really left him, and the velocity has not taken a dip. I do not see anything glaringly wrong with Corbin’s pitches or anything that leads me to believe there is a much bigger problem here. This isn’t a great matchup, but it is a really steep discount from his talent level on DraftKings, so I will sprinkle some of him in.

When we go down the board tonight, there are not a lot of good options, especially on a two-pitcher site like DraftKings, where I usually like to find a really cheap option that I think can survive the night. There are none of those tonight, even though my favorite one of the season is on the slate. I don’t want to play Homer Bailey, especially because I have been playing him for much cheaper all season and capitalizing on his upside, but I think that I would be okay with using him on a team to get some more bats, even at a higher price relative to earlier in the year.

JA Happ is another pitcher down here that has flashed enough upside to keep me interested. In his last seven games, Happ has had two starts that ruin your night, one start that was just fine, and four starts that are fantastic for the price. To me, the risk of a bad start is worth the legitimate seven-inning, 7-K upside that Happ does present.

My top 5 stacks on the slate are as follows (in no particular order):

Nationals: Jake Arrieta has been HORRIBLE vs. lefties the last two seasons. I want all of the lefties, and then I’ll sprinkle in Turner and Rendon as well.

Yankees: The Yankees made a trade for the AL home run leader last weekend, and now they are expected to get Giancarlo Stanton back tonight. The 2-5 part of this lineup has GPP winning power.

Indians: Adrian Sampson is one of the worst pitchers in the major leagues in a nice and warm park.

Diamondbacks: Have a very high run total, but are often a strange team to use/stack. I think that the lack of star power on this team makes them less owned than they should be against Senzatela.

Athletics: Gabriel Ynoa is not a good pitcher, and the Orioles’ bullpen only gets worse if the A’s can get to them. You rarely see Brett Anderson as a -212 favorite, and the Athletics projected to score 5.5 runs at home. This is all due to the Orioles lack of pitching.

All five of these stacks provide a different approach to the slate, so you should be able to fit them in with different pitching options, depending on price, which is always nice.