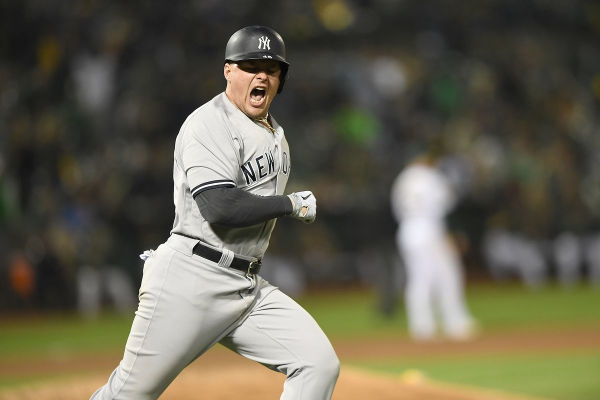 It might be now or never for the SeattleMariners. Currently, they sit 10 games back in the AL West, leaving the wild card as the only route that is somewhat viable as the last month of the season progresses. At 6 games back, that is looking increasingly unlikely unless they start a turnaround immediately.

This would be a good time to do so as they are currently facing the New York Yankees, who hold one of the two wild-card spots that the Mariners seek. After a 4-0 win by the Yanks on Friday, the same two teams will be back at it again on Saturday as the New York Yankees (88-53) travel to Safeco Field to take on the Seattle Mariners (78-63). Lance Lynn (8-10, 5.10 ERA) will toe the rubber for the Yankees against the Mariners’ Felix Hernandez (8-13, 5.61 ERA). First pitch is scheduled for 9:10 pm ET.

The money line for Saturday night’s game is set at the New York Yankees -121 and the Seattle Mariners +111. The over/under on runs scored is set at 8.5.

Yankees Look To Get Momentum As Playoffs Approach

The AmericanLeague is stacked this year and the playoffs could be pretty fun. With that in mind, though, there is going to be a ton of talent as right now the Red Sox, Astros, Indians, Yankees and Athletics would all be in if the season ended today. After just dropping 2 of 3 to the Athletics, who they would face in the wild-card game, the Yankees know they need to start getting some momentum going on their side as they enter the playoffs. To try to get that run started, they will hand the ball over to veteran Lance Lynn.

Offensively, AndrewMcCutchen finally did some damage in Friday’s game. Batting leadoff, he went 1 for 3 with a 2-run home run in the third inning. He has gotten off to a slow start since joining NewYork, but with concerns of Aaron Judge’s availability moving forward, the Yankees are hoping for his veteran presence not only in the club-house, but on the field as well.

Mariners May Be On Brink Of Failure

The Seattle Mariners have certainly had their opportunities throughout the season, but with inconsistent play, they have struggled to keep up with the Houston Astros and Oakland Athletics in the AL West. Now, 6 games out in the wild card, they are going to need a lot of things to go their way to have a chance at making the playoffs.

One thing that they need is for Felix Hernandez to pitch like the ace that he once was again. On the season, Hernandez is 8-13 with a 5.55 ERA, 1.38 WHIP and opponents are hitting .261 against him. In 147.2 innings, he has 119 strikeouts, 54 walks and has allowed 24 home runs. Against a potent Yankees lineup, that could spell trouble.

There is an above average chance that both of these pitchers give up quite a few runs. When that is the case, I look at two things…the offense and the bullpen. For both, I prefer what the Yankees have to offer. Sure, Edwin Diaz has been remarkable this season, but I like the depth that the Yankees bullpen has even more, especially with pitchers like Dellin Betances and David Robertson holding it down.

Also, even with Aaron Judge out, the Yankees offense does not have too many spots where a starting pitcher can relax. They have the ability to put runs up in bunches and I think that is exactly what they will do on Saturday. Take the Yankees -121.