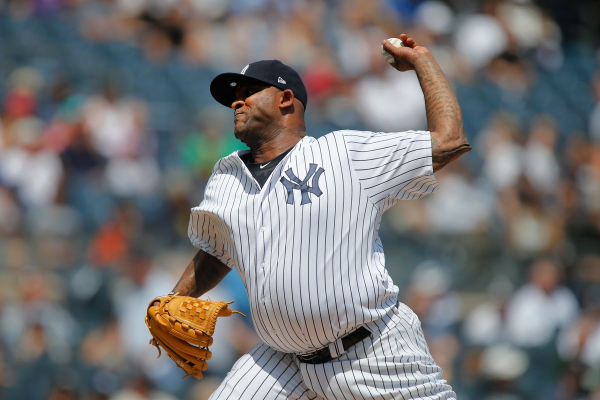 It wouldn’t be a Red Sox – Yankees series without drama and excitement filling every game.  For Monday’s game, though, about the only excitement was if you are a Red Sox fan. Boston stormed back to regain home field advantage by pounding the Yankees, 16-1.

Brock Holt made history by hitting for the first postseason cycle in history. Still, the beautiful thing about the postseason, is come game 4, they start back at 0-0 and the Yankees have the chance to push the series back to Boston for a game five. Before thinking of game five, they have to take care of business Tuesday when the Boston Red Sox (2-1) travel to Yankee Stadium to take on the New York Yankees (1-2).  For the Red Sox, they will send Rick Porcello (17-7, 4.28 ERA) to the mound to square off with the Yankees’ CC Sabathia (9-7, 3.65 ERA). First pitch is scheduled for 8:07 pm ET.

The money line for Monday’s game is set at the Boston Red Sox -120 and the New York Yankees +110.  The over/under on runs scored is set at 8.

Red Sox Hope To Finish It In Four

The Red Sox showed why their offense is so scary Monday night.  Scoring 16 runs, every starter finished the game with a hit, only one didn’t score and two didn’t have runs batted in.  The star of the night was Brock Holt, who went 4 for 6, with 5 runs batted in and 4 runs. Andrew Benintendi (2 for 3, 3 runs batted in, 2 runs, 1 stolen base) and Mookie Betts (2 for 5, 2 runs batted in, 2 runs) also had big nights.

What is even crazier than the stat line is that they are so deep that against the lefty in Sabathia Tuesday, there is a good chance that Holt doesn’t even start. Regardless, no matter who is on the mound for the Yankees, there just aren’t many weaknesses in this Red Sox offense.

On the pitching side, the Red Sox will go to Rick Porcello in game 4.  Porcello was originally scheduled for game 3, but after being used in game 1, manager Alex Cora decided to bump him back a day.  During the regular season, Porcello was 17-7 with a 4.28 ERA, 1.18 WHIP and opponents hit .241 against him. I

n 191.1 innings, he had 190 strikeouts, 48 walks and allowed 27 home runs.  In his last start, he went 2 innings against the Yankees, giving up no earned runs and striking out 2. If Porcello does get in a bit of trouble, it would not be surprising to see David Price be brought in to work in relief.

Yankees Trying To Push For Game 5

At this point, the Yankees simply have to put Monday night’s loss behind them and reset for Tuesday.  The nice thing is that they have a veteran taking the mound that has been there before, actually several times before.  Sabathia will be making his 23rd postseason start on Tuesday.

While his stuff isn’t as good as it once was, the Yankees are hoping his experience will help calm a Yankees team that is reeling.  During the season, Sabathia was 9-7 with a 3.65 ERA, 1.31 WHIP and opponents hit .250 against him. In 153 innings, he had 140 strikeouts, 51 walks and allowed 19 home runs.  In his last outing, one he was ejected from, he went 5 innings against the Rays, allowing no earned runs and striking out 5.

Offensively the Yankees are hoping to get a big night out of their stars.  Aaron Judge has hit well thus far this postseason, going 5 for 12 with 3 home runs and 4 runs batted in.  Gary Sanchez also has a couple home runs. But to keep up with the RedSox, they will need their full complement of offensive stars, including Giancarlo Stanton, Gleyber Torres, Didi Gregorius and others to contribute.

They are also hoping that AaronHicks, who had to leave after an injury in game two, might be able to give it a go. He would be a very welcomed addition to the middle of their order.

Game 5 Back In Boston

At the beginning of this series, I told myself that it would go the distance simply because it always seems like Red Sox and Yankees’ series go the full number of games.  While Sabathia has definitely seen his best days come and go, I think he will put out a solid four or five innings and then hand it over to the bullpen. From there, I think that Chapman, Robertson, and the rest of the bullpen gets it done tomorrow night and forces a game five in Boston.  I am taking the Yankees in this one at +110.