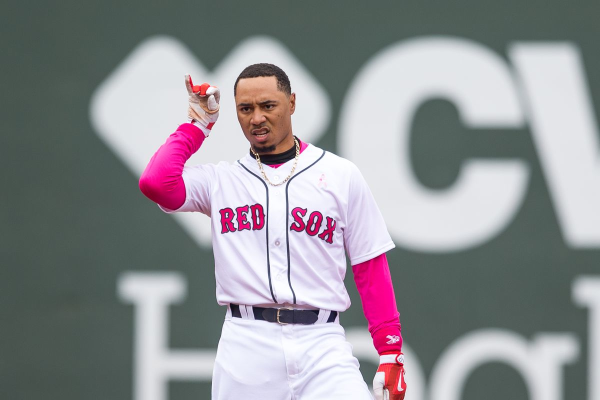 If the first two games have shown us anything it is that this series is going to be filled with tense moments and the smallest advantage may determine the eventual winner. In the first two games, we have seen a lot: home runs, crazy bounces, umpires getting in the way, and manager ejections.

We also saw the HoustonAstros do what they needed to do, which is steal one in Boston to shift the home field advantage to them. On Tuesday, the Boston Red Sox (1-1) will try to repay the favor when they travel to Minute Maid Park to take on the Astros (1-1). For the Red Sox, they will be sending righty Nathan Eovaldi (7-7, 3.66 ERA) to the mound to square off with the Astros’ southpaw, Dallas Keuchel (12-11, 3.78 ERA). First pitch is scheduled for 5:09 pm ET.

The moneyline for Tuesday’s game is set at the Boston Red Sox +115 and the Houston Astros -135. The over/under on runs scored is set at 8.5.

After letting game one slip away, the Red Sox are hoping to swing the home field advantage back in Boston’s favor by taking game three in Houston. To try to do so, they will be sending NathanEovaldi to the mound. On the season, he is 7-7 with a 3.66 ERA, but since being acquired by Boston, he has gone 3-3 in 12 contests, with a 3.33 ERA, 1.28 WHIP and opponents are hitting .266 against him. In 54 innings with the Red Sox, he had 48 strikeouts, 12 walks and allowed 3 home runs. In his last start against the Yankees in the ALDS, Eovaldi went 7 innings, allowing 1 earned run and striking out 5.

While the RedSox were able to salvage game 2, they would really like to get J.D. Martinez going at the plate in this series. Thus far he is 0 for 7 with a walk and 3 strikeouts. During the regular season, Martinez hit .330/.402/.629 with a 1.031 OPS. He had 43 home runs, 130 runs batted in and scored 111 runs. While two games is a small sample size, the Astros pitchers have done a nice job avoiding hard contact from Martinez, a potential MVP award winner. Another frontrunner for the MVP this season has had a nice series thus far. MookieBetts is 3 for 8 with 2 doubles, a run batted in and 2 runs scored.

Astros Trying To Pull Ahead In Series

Game 2 seemed like a game that the Astros were never out of, but could never get enough traction to really feel like they had a chance. Still, in the 9th inning against CraigKimbrel, they were able to get the tying run to the plate and Alex Bregman was able to hit one to the warning track, just missing a two-run home run.

Bregman this series has been an on-base machine. While he is 0 for 3 at the plate, he has drawn 6 walks and has a .700 OBP. In fact, the entire team has done well being patient as they have drawn 15 walks in just 2 games. Still, the Astros hope that Bregman will get something to hit, but thus far Boston’s coach Alex Cora has stayed true to his word that he didn’t want Bregman to beat them.

On the mound for the Astros will be lefty Dallas Keuchel. During the regular season, Keuchel was 12-11 with a 3.74 ERA, 1.31 WHIP and opponents hit .263 against him. In 204.2 innings, he had 153 strikeouts, 58 walks and allowed 18 home runs. A finesse, ground ball type pitcher, Keuchel will hope to keep the Red Sox off balance like he did the Indians in his last start. Against the Tribe, he went 5 innings, allowing 2 earned runs and striking out 2.

While Keuchel has not been bad this year, he definitely does not seem like the pitcher that won the Cy Young Award just a few years ago. Eovaldi won’t be perfect, but I think he will do well enough to keep his team ahead. Worth watching is how Keuchel does in the first inning. He has struggled to start off contests this season and if he can get through the heart of the Red Sox order out of the gate, he may settle into a nice groove. Ultimately, though, I just see the Red Sox putting some runs on him before it is all said and done. Take the Red Sox at +115.

Tonight’s NBA betting schedule is lacking in overly compelling matchups, but tonight’s action will also be taking place with a few notable names missing. Booker, Morant, and Lillard Sidelined Tonight and Beyond Booker Out Versus Pistons Due to Hamstring Injury The Phoenix Suns lost Devin Booker (hamstring) on Tuesday against Golden State but closed out END_OF_DOCUMENT_TOKEN_TO_BE_REPLACED