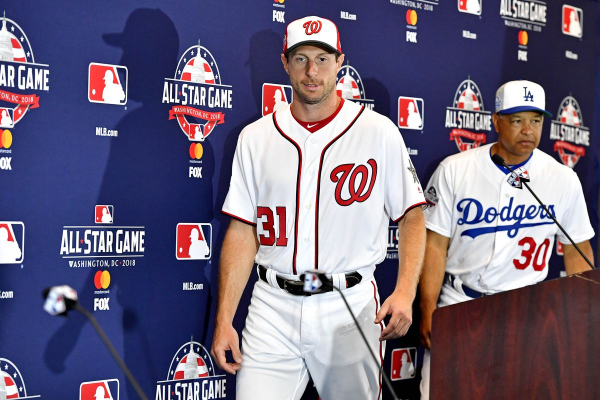 Tuesday night is a celebration of baseball’s finest players as players from all 30 teams convene to face off in a battle of the best of the best. The Major League All-Star game will be played with Nationals Park, the home of the Washington Nationals, serving as the setting. Despite the fact that the American League is 23-6-1 in the last 30 All-Star games, you still never know who will step up and win the ballgame for either side. For the American League, they will be sending Chris Sale (10-4, 2.23 ERA) of the Boston Red Sox to the mound against the National’s own Max Scherzer (12-5, 2.41 ERA). The game is scheduled for 7:30 pm ET.
The moneyline for the All-Star game is set at the American League -130 and the National League +110.

The American League has been on fire in All-Star games lately. Even though the overall series is even at 43-43-2, the American League is currently on a five-game win streak. A.J. Hinch, the manager of the defending champion Astros, will be sending out Red Sox ace, Chris Sale, to take the mound. Mind you that pitchers will generally not go more than two innings, out of respect for their teams, but Hinch has some really solid options. Indications are that he might go with Chris Sale and Luis Severino to start the game in the first handful of innings. On the season, Sale is 10-4 with a 2.23 ERA, 0.899 WHIP, and has 188 strikeouts in 129 innings. After Sale, Severino will come in sporting a 14-2 record with a 2.31 ERA, 1.005 WHIP and has 144 strikeouts in 128.1 innings. Throw in pitchers like Blake Snell, Charlie Morton, Trevor Bauer and EdwinDiaz, among several others, and Hinch will be able to make it very tough on opposing hitters.

Offensively, the American League is deep. They are so deep that MannyMachado is batting seventh. The prize trade acquisition whose days are probably numbered with the Orioles is currently batting .315/.387/.575 with a .963 OPS. He has 24 home runs, 65 runs batted in and has scored 48 runs. Not too bad for a number seven hitter. With a lineup of Mookie Betts, Jose Altuve, Mike Trout, J.D. Martinez, Jose Ramirez, Aaron Judge, Manny Machado, Jose Abreu and Salvador Perez, Max Scherzer better be on his game.

While the American League is stacked, the NationalLeague is nothing to scoff at either. They will boast a lineup that consists of Javier Baez, Nolan Arenado, Paul Goldschmidt, Freddie Freeman, Matt Kemp, Bryce Harper, Nick Markakis, Brandon Crawford and Willson Contreras. Bryce Harper is the guy I am watching in this lineup. He is not only playing in front of his own fans, but he is also coming off of an impressive Home Run Derby win where he hit a combined 45 home runs over the three rounds. He will try to keep that momentum going in the All-Star game.

Pitching wise, the National League is plenty deep as well. Max Scherzer has been dominant this year. He currently is boasting a 12-5 record with a 2.41 ERA, 0.899 WHIP and 182 strikeouts in 134.2 innings. Beyond Scherzer, players like Jacob deGrom, Zack Greinke, and Aaron Nola bolster a deep set of starters. What is really interesting to me is the trifecta of left-handed relievers that the National League has. Felipe Vazquez, Brad hand and Josh Hader have been dominant this year. If the National League holds a lead in the later stages of the game, they are going to be tough to match up with.

American League Gets To Six