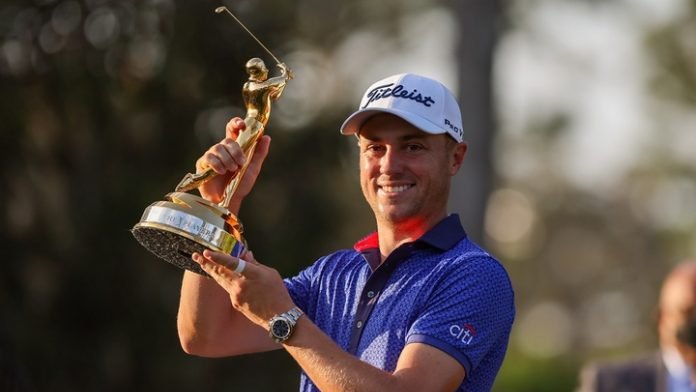 The golf world is buzzing this week because one of the sport’s most well-known events is slated to kick off in a few days. The PGA TOUR’s “unofficial fifth major” — The Players Championship — is scheduled to begin on Thursday, March 10.

The famed tournament will, once again, be played on the TPC at Sawgrass Stadium Course in Ponte Vedra Beach, Florida. The length of the course is 7,189 yards, with par set at 72.

Also simply known as “The Players,” the annual event offers the biggest purse of any golf tournament. Not only will the winner take home $3.6 million of the $20 million purse, but they’ll also receive a three-year invitation to the Masters Tournament, as well as three-year exemptions from the other three majors.

Each of the last seven Players winners have been first-time champions, so it’ll be interesting to see if that trend continues this year. Justin Thomas got the job done last year, but this time he’s tied with Jon Rahm at +1200 as BetMGM’s tournament favorites.

Here’s a look at everything you need to know about the Players Championship, ranging from general information to the best bets.

Odds to Win the 2022 The Players Championship

Best Bets for the 2022 The Players Championship

Markets are from BetMGM and FanDuel Sportsbook.

Justin Thomas has been on a roll over the course of the 2022 PGA TOUR. The 28-year-old Louisville, KY native has competed in six events so far, placing inside of the top 25 in each of them. If that wasn’t impressive enough on its own, he’s placed T-5th or better on four separate occasions as well.

Thomas also has the advantage of being the defending champion. He won The Players last year by finishing 14-under-par and edging out Lee Westwood by a single stroke for the victory.

Aside from that, Thomas has four top-25 finishes at The Players Championship. Even though he hasn’t won it any other times, he did place third back in 2016. If he can mix his past success with his current-day momentum, Thomas has a great opportunity to make bettors happy in Ponte Vedra Beach this week.

Rory McIlroy is another familiar name taking to Sawgrass this week. Like Thomas, McIlroy has won The Players before, having taken home the honors in 2019.

The 32-year-old veteran golfer has had his fair share of highs and lows at The Players Championship. On one hand, he’s failed to make the cut five times in his 12 career entries. Although that may be worrying to some bettors, he’s also finished 10th or better four times.

When it comes to his current play, some fans and experts are concerned that McIlroy is not as dominant as he once was. Even though that might be the case, he did win the CJ Cup back in October. He’s also placed T-10th and T-13th in his most recent two outings, so the potential is there for another successful week. Only time will tell if McIlroy can put the pieces together to become a two-time champion at Sawgrass.

The 2022 PGA TOUR has been a rough showing for Brooks Koepka. While he’s enjoyed some success with three top-10 finishes in nine events played, he’s failed to make the cut four times. Considering how he was only cut six times last season, bettors have the right to be concerned.

Having said that, Koepka could be a dark horse to win The Players Championship. For starters, he’s played T-3rd and T-16th in his last three outings. Even if he’s inconsistent, at least he’s proven that he can be competitive.

Not only that but Koepka has placed 16th or better in two of his last three Players appearances. While he hasn’t come as close to winning as others, the fact that he shot a 63 in Round 4 back in 2020 shows that he knows how to dominate the course when needed.

If Koepka can get off to a hot start on Thursday, he has a great chance to be in the thick of things until the end.

Few golfers on the 2022 PGA TOUR have been as hot as Collin Morikawa. Although he’s yet to win a tournament this season, he’s yet to finish worse than T-7th in four outings.

Morikawa has been a virtual lock across betting markets lately, finishing inside of the top 5 in each of his last three events. Fans last saw him at the Genesis Invitational at the end of the February, which ended with him placing second as he finished two strokes behind Joaquin Niemann for the win.

This week will mark Morikawa’s second-ever time competing at The Players Championship. He made his debut last year; however, things didn’t go as planned, with him finishing 41st. Nevertheless, Morikawa is playing too well to let that past performance be indicative how he’ll play at Sawgrass this week.

As with any tournament, it’s never wise to count Jon Rahm out. The world’s No. 1 golfer has not finished worse than T-21st in his last six outings, which includes a second-place finish at the Sentry Tournament of Champions.

At +270 odds, bettors can get some decent value without Rahm having to win the entire tournament. After all, a top-5 finish is something that he’s already done twice over his six most recent events played.

In terms of his history at The Players, Rahm has placed 12th and 9th in his last two showings. Although neither of those performances cracked the top five, he’s improved his placement each year. Assuming the trend continues, bettors would be wise to put money down on Rahm for this prop.

The highs have been high for Joaquin Niemann this season, although, the lows have been, well, low at the same time. On one hand, the 23-year-old Chilean has failed to make the cut in three of his last six events.

On the other hand, he placed T-6th or better in the other three tournaments he participated in over that span, including his Genesis Invitational victory on Feb. 20.

Niemann also made his Players debut last year, placing 29th after going four-under-par. Although that wasn’t exactly a top-10 finish, he clearly proved that he has what it takes to make an impact at Sawgrass.

After failing to make the cut in his last outing at the Honda Classic, Niemann could use a top-10 finish in Ponte Vedra Beach. He’s already shown the ability to bounce back before this season, so it’ll be interesting to see if he can finish near the top of the field by the time this week is over.

The 2022 French Open is underway at Stade Roland Garros in Paris, France, and we are already almost through the first week of play. Tomorrow, the remaining third-round matches will take place, after which the men’s and women’s singles draws will be down to their final 16 contenders. In both men’s and women’s singles, there END_OF_DOCUMENT_TOKEN_TO_BE_REPLACED