Berger Wins At Colonial In PGA’s Return To Action 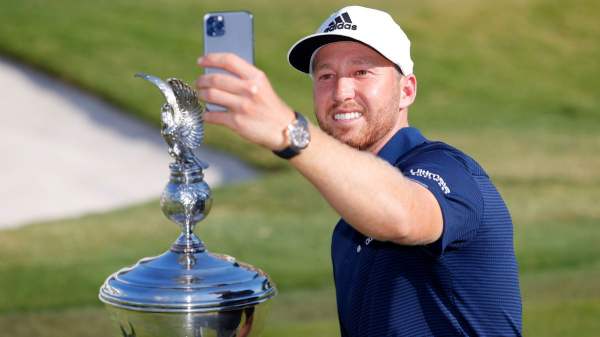 Nobody knew what to expect this weekend at Colonial Country Club in Fort Worth, Texas. After all, it had been three months since the last official PGA event took place, and the world outside has certainly changed around the game.

For Daniel Berger (+5000 to win at the open), this was a moment he was just happy to be in – and on the winning end of. This was his third win on the PGA Tour, with all three of his wins coming on this exact week in the calendar. The other two came back in 2016 and 2017 when it came before the U.S. Open.

The eerie silence on the course was something that golfers will have to get used to for the considerable future. When Berger sank a birdie on the 18th hole that put him at a 4-under 66 and forced a one-hole playoff with Collin Morikawa, there were no sounds.

There were no groans either when Berger sat back and watched Morikawa miss a heartbreaking six-foot birdie putt that would have won him the tournament, sending them into a playoff.

“It was a little different for sure, but in the end, I was holding the trophy,” Berger said. “And that’s all that matters to me.”

For Morikawa, the moment was certainly one that he’d like to forget. If that birdie putt on 18 goes down, he is the one raising the trophy on Sunday.

“Just hit a better putt,” Morikawa said. “My mind can’t go (to) much else other than what just happened on that hole. We gave ourselves our chance, and that’s what you want at the end. Yeah, it’s going to sting for a little bit, but we’ll make it out, and we’ll go on to next week.”

Xander Schauffele has plenty of reason to feel the sting as well. Going into Sunday, he owned a one-stroke lead for the championship but had plenty of golfers nipping at his heels the entire day.

In fact, Schauffele made three consecutive clutch putts before heading into the daunting “Horrible Horseshoe” at Colonial. A three-foot par putt on 17 in regulation play rimmed around the hole while a 25-foot birdie putt on 18 to force a playoff came up just short.

“If there are fans and everything with the ‘oohs’ and ‘aahs,’ I’d probably be a little more pissed off,” Schauffele said. “Maybe that’s a good thing for me right now. But it was definitely weird. It was sort of an internal battle, which it always is for me, but more so internal this week just with no fans.”

PGA Tour commissioner Jay Monahan watched from afar in Florida with the competition running down the stretch. Luckily for him, and the sport of golf, all of the 487 tests for COVID-19 at Colonial came back negative, and the weekend went off without a hitch.

“This has been a phenomenal start to our return,” Monahan said. This is about a sustained return. But I think as we sit here late in the day Sunday, there’s no question that this has been an exceptional week.”

Next up for the PGA is the RBC Heritage at Hilton Head in South Carolina. Monahan still wants to see how interstate travel affects the players, and they will certainly be tested upon arrival at Hilton Head.

There is no doubt that golf had the eyes of the sports world on them this weekend. We’re all waiting for our favorite sports to play games once again, and it’s almost starting to feel normal without them.

The PGA’s performance this weekend was a great reminder that we can get back on track if things are planned out properly and executed exceptionally.