CFL Week 7 Betting: Can the Roughriders Rebound vs. Argonauts? 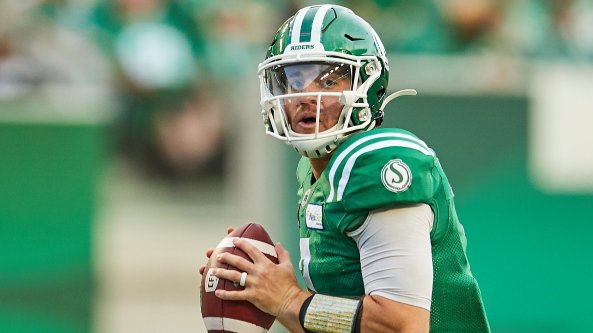 The first six weeks of the 2022 Canadian Football League season are in the bag. CFL fans around North America have barely had any time to relax now that Week 7 is set to begin on Thursday, July 21.

The first of Thursday’s two matchups involves a collision between the Montreal Alouettes and Ottawa RedBlacks at 7 p.m. ET. The Hamilton Tiger-Cats will then travel out west to face the BC Lions at 10 p.m. ET.

The Winnipeg Blue Bombers hope to keep their undefeated record together when they visit the Edmonton Elks on Friday at 9 p.m. ET. The Toronto Argonauts and Saskatchewan Roughriders will then close out Week 7 on Saturday at 7 p.m. ET.

The Calgary Stampeders are the lone team on bye this week.

Here’s a look at FanDuel Sportsbook’s odds for the CFL Week 7 matchups, as well as a prediction for each game.

The Alouettes have been one of the worst teams in the CFL this season, emphasized by a collapse against the Elks last week. Montreal led 24-12 at halftime but was ultimately outscored 20-7 in the second half, resulting in a 32-31 loss. Considering just how bad the Elks have been this season, it’s understandable if fans are questioning the Alouettes’ status as favorites here.

Meanwhile, the RedBlacks are also looking to bounce back following a 25-23 loss to the Tiger-Cats to close out Week 6. Although Ottawa was up 10-1 after the first frame, the RedBlacks were outscored 24-13 for the remainder of the way, highlighting improvements that needed to be made.

Although both teams are far from world-beaters, I do have faith in the Alouettes to grind out a win against the RedBlacks.

Hamilton Tiger-Cats vs. BC Lions Betting Odds and Prediction

The Tiger-Cats have a tough test ahead of them on Friday as no CFL team is a bigger underdog than them in Week 7. Hamilton’s win over Ottawa last week was the club’s first of the season, so it’ll be interesting to see if momentum is continued. The Tiger-Cats have the second worst scoring defense in the league this season and only time can tell if it can handle BC’s offense, which averages 39.8 points per game.

The Lions were on bye last week, meaning the last time we saw them was when they lost, 43-22, to the Blue Bombers in Week 5. BC has had a lot of time to reflect on that loss and must come strong out of the gate this week. All eyes will be on quarterback Nathan Rourke, who leads the CFL with 12 passing touchdowns so far in 2022.

There’s a reason why the Lions are heavy favorites here. They shouldn’t have an issue dealing with the Tiger-Cats.

The Blue Bombers enter Week 7 of the 2022 CFL season as the final undefeated team after handing the Stampeders their first defeat last week. QB Zach Collaros led the way for Winnipeg, completing 71.1% of his passes for 315 yards and a pair of touchdowns. Wideout Greg Ellingson was the beneficiary of most of that working, hauling in 11 passes for 152 yards while fellow WR Carleton Agudosi caught both TD passes.

It’s hard to imagine that Elks putting up much of a fight. Sure, Edmonton is buzzing after its win last week, but these two teams aren't exactly on the same level. The Elks have been giving up 36.7 points per game while only scoring 20.2. Meanwhile, the Blue Bombers are winning their games by an average score of 26-17.3.

Unless the Elks have a miraculous performance, expect the Blue Bombers to remain undefeated.

The Argonauts are another team looking to keep the ball rolling this week. They had a slow start to the 2022 CFL campaign, however, they’re coming off a solid 30-24 win over the Roughriders. It was a relatively close game that saw the Argonauts take advantage of the Roughriders’ turnovers, which included three interceptions.

Saskatchewan obviously doesn’t want to drop back-to-back games to Toronto, meaning the Roughriders must play some mistake-free football on Saturday. QB Cody Fajardo certainly can’t go out there and throw three interceptions again. The offensive line needs to do what it can to give him as much time as possible, however, that be could tough against an Argonauts defense that sacked Fajardo five times last week.

Although the Roughriders should have the advantage of playing at home, I think that the Argonauts will keep this close.