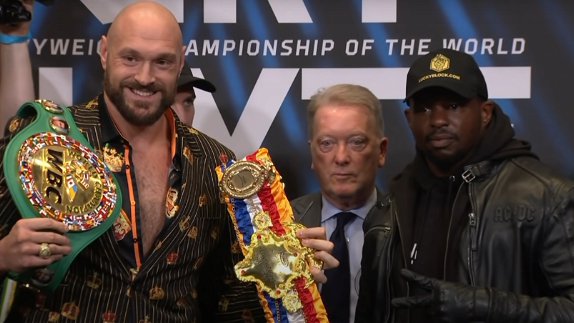 This fight has been a long time coming and it deserves to be seen on one of the biggest stages, which is why it’s taking place at the famed Wembley Stadium in London, England.

Both The Ring and WBC heavyweight titles will be on the line when Fury and Whyte square off in front of (potentially) over 90,000 screaming fans.

Will Fury walk away the victor in his homecoming on United Kingdom soil? Or will Whyte shock the world by pulling off one of the biggest boxing upsets in quite some time?

When and where is the Fury vs. Whyte fight?

What time does Fury vs. Whyte start?

How can I watch the fight?

Boxing fans can catch Tyson Fury vs. Dillian Whytein multiple ways. However, it’s available to United States users on ESPN pay-per-view and ESPN+. The cost of the event itself on either platform is $69.99.

The listed fight odds are from FanDuel Sportsbook, Caesars Sportsbook, and BetRivers, three of our top recommended sportsbooks.

Can Fury Continue His Undefeated Streak?

There’s no doubt about it: Tyson Fury is one of the greatest heavyweights that boxing has ever seen, further cemented by the fact that he’s 31-0-1 in his 32 career matches.

Fury will enter his matchup against Whyte riding a four-fight winning streak. Three of his last four wins have come by KO or TKO, with a pair of those three victories coming in his last two fights against Deontay Wilder.

Wilder certainly gave Fury a run for his money in the final meeting of their trilogy in October 2021, however, it was the Gypsy King that emerged the victor after an 11th-round knockout.

Fury’s history alone makes it easy to see why he’s the heavy betting favorite across the board. Few have even come close to beating him, let alone giving him a legitimate challenge.