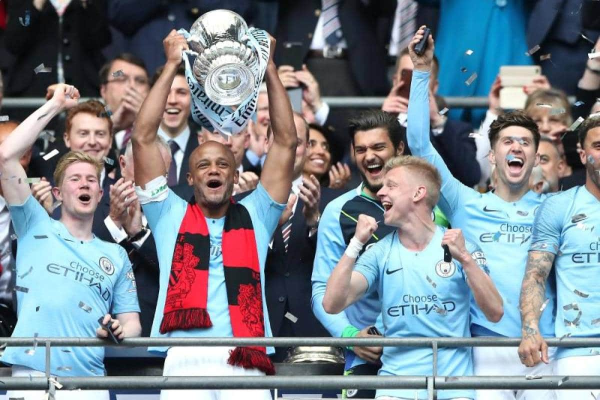 The Premier League season may be over, but the offseason is just beginning. The transfer window is already open, so there’s a lot going on. Let’s catch up on everything from the past week.

One week after winning their second straight league title, Manchester City completed the domestic treble by winning the FA Cup. After Watford missed a golden opportunity to go up 1-0 early in the game, City steamrolled the Hornets to the tune of a 6-0 win. It was a complete and total victory for Manchester City, who took home all three domestic trophies in 2019. The only trophy eluding them this season is the Champions League, although manager Pep Guardiola stated after the game that winning the domestic treble “is more difficult than to win the Champions League.”

With Manchester City winning the FA Cup, it secured a spot in next season’s Europa League for Wolverhampton, who finished seventh in the Premier League. One season after gaining promotion, Wolves will be playing in Europe, joining the competition in the second qualifying round. Meanwhile, City’s win helped prevent rival Manchester United from having to join Europa League in the qualifying stage, a scenario that would have disrupted their preseason plans. With help from their neighbors, United will go straight to the Europa League group stage.

Saturday’s FA Cup final will go down as the final game of captain Vincent Kompany’s Manchester City career. Kompany announced on Sunday that he has agreed to join Belgian side Anderlecht as a player-manager. The 33-year-old Belgian international began his pro career with Anderlecht and will presumably finish his career back where it began after 11 seasons with Manchester City.

Not the Only One

Kompany won’t be the only one saying goodbye to Man City this summer. Guardiola has indicated that several players may be looking to leave the club in search of more playing time elsewhere, with Ilkay Gundogan, Fabian Delph, Leroy Sane, and Nicolas Otamendi among the players who are most likely to leave. Of course, Pep is also planning to add three or four players to improve the squad further, as they attempt to win a third straight Premier League title and perhaps challenge for Champions League supremacy.

Days after the end of the Premier League season, Chelsea played a friendly match with the New England Revolution. Unfortunately, they failed to get through the game injury-free, as Ruben Loftus-Cheek suffered a ruptured Achilles. After earning more opportunities to start for Chelsea late in the season, Loftus-Cheek will miss next week’s Europa League championship game against Arsenal as well as the UEFA Nations League semifinals (and possibly finals) with England next month.

Things didn’t end particularly well this season for new Manchester United manager Ole Gunnar Solskjaer, but executive vice-chairman Ed Woodward has indicated that the club will back Solskjaer financially with his summer transfer plans. The Red Devils are likely to lose half a dozen players while trying to add just as many new pieces, so it figures to be a busy summer for Solskjaer, who wants to do business as quickly as possible.

Antonio Valencia and Ander Herrera are already set to leave, while the likes of Matteo Darmian, Marcus Rojo, Juan Mata, Romelu Lukaku, Eric Bailly, Alexis Sanchez, and Paul Pogba are among players who could possibly join them in a mass Old Trafford exit. However, recent reports indicate that Anthony Martial will not be one of the players to leave because he is favored by co-chairman Joel Glazer.

Bournemouth has wasted no time since the transfer market opened. The Cherries have spent $16.5 million on Bristol City defender Lloyd Kelly, who plays primarily left back but could feature as a center back as well. Bournemouth is also said to be targeting a goalkeeper this summer and has reportedly identified Burnley’s Nick Pope as their top target. Burnley also has Tom Heaton and Joe Hart on their squad, so they will likely be willing to part with at least one of the three.

A week after firing Chris Hughton as manager, Brighton & Hove Albion has found his replacement. The club will hold a press conference Monday to introduce Graham Potter as the new manager. Potter spent this past season at Swansea City, leading the Welsh side to 10th place in the Championship one season after they were relegated from the Premier League. Prior to that, Potter had an eight-year stint at Östersunds FK in Sweden. He’ll now take over a club that barely escaped relegation in the Premier League this past season.