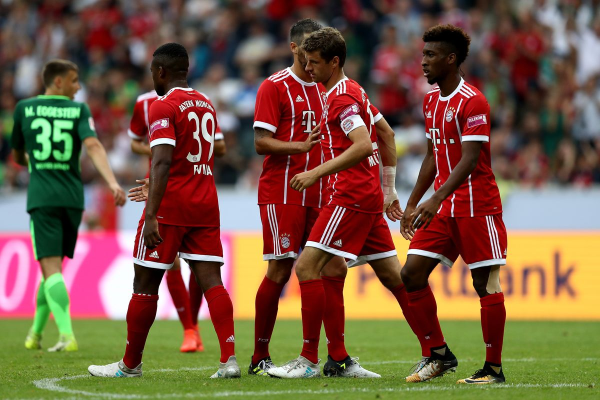 Less than 4 days to go before the 2018-19 Bundesliga season begins and what a match to kick the season off with: Record league winners, 2017-18 Bundesliga champions, BayernMunich face upbeat 3rd place finishers TSG 1899 Hoffenheim.

Bayern will be starting the season with Niko Kovač at the helm, taking over from Jupp Heynckes who retired at the end of 2017-18 the season, while Julian Nagelsmann leads Hoffenheim in his last season in charge. Nagelsmann has been with Hoffenheim since the 2015-16 Bundesliga season and has since then brought the club to new heights.

BayernMunich continues their reign in the Bundesliga, winning their 6th title in a row. It wasn’t a season without controversy for The Bavarians though as manager Carlo Ancelotti, who was in charge since July 2016, was sacked only 6 games (4 wins, 1 draw, 1 loss) into the season. The 3-0 defeat to PSG in the Champions League may have been the trigger for the decorated manager’s rather premature sacking but dressing room matters would seem to have been a bigger factor in his departure from the club. With five players, including Lewandowski, Robben, and Muller, unwilling to support Ancelotti plus a soured relationship with Ribéry, it was bound to go downhill for the Italian manager. That and the lack of silverware outside the domestic league. Ancelotti left with Bayern at 3rd in the Bundesliga and 2nd in its Champions League group.

Jupp Heynckes eventually took over Bayern in October 2017; his 4th time in charge. Heynckes was behind the treble winning season of the Bavarians in 2012-13. His return to Bayern and the Bundesliga was marked with an empathic 5-0 victory against SC Freiburg. Heynckes won 23 of the 27 Bundesliga games he oversaw (drew 1 and lost 3) and won the tournament with 84 points and 5 games to spare. In other competitions: Heynckes led Bayern to the Champions League Semi-finals but lost to Real Madrid and reached the DFB-Pokal Finals where they faced and were defeated (3-1) by Niko Kovač’s Eintracht Frankfurt.

TSG 1899 Hoffenheim continue their rise to fame under the management of Julian Nagelsmann, finishing 3rd in the 2017-18 Bundesliga season – their 10th and overall season in the Bundesliga. Averaging 6th in the table throughout the season, Hoffenheim finished level on points (55) with Borussia Dortmund and Bayer Leverkusen but bested both teams on goal difference (18, 17 and 14 respectively). The win against Dortmund in Hoffenheim’s last game of the season ultimately decided the final positions of both teams. This has been their best league finish yet.
Nagelsmann vs Kovač: Managerial Successes

Both managers saved their teams from relegation in their Bundesliga debut season albeit quite different in manner. Hoffenheim were 17th in the league 7 points away from the relegation safe zone (15th spot) when Nagelsmann took over. He won 7 of the last 14 games, finishing a point above the relegation playoff spot. Kovač and Frankfurt, on the other hand, finished 16th forcing them into relegation playoffs. Frankfurt eventually kept their spot in the Bundesliga.

The succeeding seasons for both were better. The 2016-17 season saw Kovač and Frankfurt finishing 11th while Nagelsmann led Hoffenheim to an astonishing 4th place finish. Frankfurt also made it to their first DFB-Pokal final since 2006 but were unable to take home the trophy against Dortmund while Hoffenheim qualified for the UEFA Champions League playoff for the first time in their history. Hoffenheim faced Liverpool in the playoffs and were unable to progress to the group stage. The loss however still earned Hoffenheim a place in the 2017-18 UEFA Europa League group stage.

Building on progress, both managers achieved new heights in the 2017-18 season. Nagelsmann secured a place in the group stages of the Champions League for Hoffenheim as they finished 3rd in the league while Frankfurt finished 8th in the Bundesliga and once again made it to the DFB-Pokal finals – this time beating the Bundesliga champions, Bayern Munich, 3 goals to 1. This was Frankfurt’s first title win since 1988.

With Frankfurt, Kovac was unable to win against Nagelsmann’s Hoffenheim in Bundesliga. Out of 5 matches played, Hoffenheim won 2; the other 3 matches ended in a draw.

Kovač is now leading Bayern but just to see how he performed vs his new employers:
Kovač’s Frankfurt had no wins against Bayern Munich (Ancelotti and Guardiola) in the Bundesliga – a draw was their best result – but won against Jupp Heynckes 3-1 in the DFB Pokal Final.

Player Changes and Other Stats

Nagelsmann and Hoffenheim will be without their top goal scorer Mark Uth who scored 17 goals for them last season. They will also be without Serge Gnabry who has likewise been stellar for the club: scoring 10 goals and contributing five assists in 22 games. Unfortunately, Gnabry will be back with Bayern after his season-long loan to Hoffenheim.

Bayern will be without box-to-box midfielder Arturo Vidal (to FC Barcelona) and winger Douglas Costa (to Juventus) this season but will be joined by central midfielder Leon Goretzka from FC Schalke 04
Bayern have won the last 5 consecutive opening matches with an aggregate score of 19-3.
This will be the first time Bayern opens against a Champions League club.
Conclusion

It will be an exciting game, that’s for sure. While Nagelsmann has enjoyed victories at the expense of Bayern before, the challenge will be replicating that success without his top goalscorer, Mark Uth (who has scored the most for Hoffenheim against Bayern), and wunderkind Serge Gnabry. And it doesn’t help that Gnabry will be playing for Bayern. Vidal’s absence in midfield could be exploited but will it be enough of a change for Hoffenheim to capitalize on. Nagelsmann’s biggest consolation yet, he hasn’t lost to Kovač – and he will want to keep it that way.

Kovač, on the other hand, has a strong team at his disposal but his tactics with the squad are yet to be tested in the Bundesliga. If anything though, Kovač is off to a good start after winning 5-0 against his former club, Frankfurt, in the Super Cup and winning a friendly against Hamburger SV, four to one. Wouldn’t put much weight on either game though as he did play against a team that he worked on for 2 seasons and the other, in a friendly.

I’d fancy a win for Hoffenheim (+875) but considering the loss of key players, a draw (+480) seems more plausible. Still, Bayern Munich (-400) have been champions for 6 seasons straight now and new coach or not, they should have a lot of team chemistry to get them by.