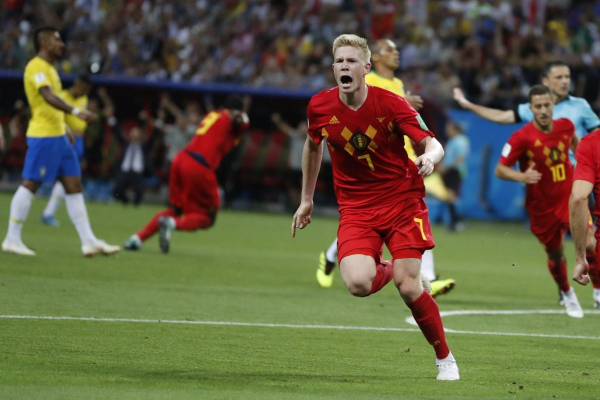 The 2018 World Cup is down to it’s final four and the world is certainly watching. France, Belgium, England, and Croatia have survived the round robin stage and two games of the knockout round to qualify for these semifinals. These were some great games and we expect more as we will be able to crown a champion in two more games. The popularity of the Cup has provided sportsbooks with plenty of action and we now have one last chance to get in one last futures bet for the overall winner. The odds still have plenty of value so picking the winner will still pay out a good amount. Let’s take a look at not only how these teams got here but how far will they go.

The French national squad has lived up to their expectations. After breezing through the first round, France took out Lionel Messi’s Argentina team 4-3 and then Uruguay 2-0 to reach the semifinals to face Belgium next. France and Belgium were unfortunate enough to be on the tough side of the bracket and many feel the winner of this match will take the Cup. France has been great every game thus far and don’t show any signs of slowing down. One of the only  concerns for the French entering the tournament was their youth. Many felt this team would peak in the 2022 World Cup yet here we are with the youngsters playing wonderful soccer. Especially 19 year-old Kylian Mbappe. This team is the favorite but at +200 is a solid investment. Getting past Belgium to reach the finals will be tough but they may be the one team left in the tournament that can take them out.

The BelgiumRedDevils are another team playing at such a high level. They also cruised through the round robin and even beat another semifinalist in England. Belgium then had a great comeback versus Japan after going down 2-0 early in the second half and won 3-2 in the final moments. And then they took down powerhouse Brazil 2-1 sending the favorites Neymar and company rolling home. The Belgium team definitely has the most impressive wins this Cup and should make trouble for France. They will be a slight underdog in that matchup but a underdog nonetheless and +250 is a great number and payout to win the whole thing. This is Belgium’s best World Cup team ever and maybe good enough to win the Cup.

The England team has enjoyed some big time scoring and outside a round robin loss to Belgium have looked like a formidable squad capable of taking the Cup. StrikerHarryKane has lead the way with 6 goals so far in World Cup play and is the odds on favorite to win the Golden Boot award. The English team has everything going for them including, most of all, being on the weak side of the bracket. They beat a good Columbian team as well as the Swedes but were strong favorites to take both of those matches and the same will be true when they face Croatia in the semifinals. Not to take anything away from those teams but the other side of the bracket had Brazil, France, Argentina, and Belgium. That’s a tough bracket and nice to avoid. But this is a good team and the England club is going to be tough to knock out. That said, they have the same odds as Belgium who beat them earlier in the tournament. But does that make them a good futures bet? It doesn’t. Yes, they have an easier road to the final, but, once they get there, they’ll be playing a top-tier team.

Having gotten past Russia for a trip to the semifinals put Croatia in the position to play spoiler and ruin everything. This is a good team and will fight until the end. Croatia has beaten tough teams in Argentina and Iceland and then had to outlast Denmark and Russia. But they did it and here they are. The obvious longshot at +400 but still in the tourney, Croatia has good value but too much will have to break the right way for them to claim the Cup. The +400 is tempting but should be avoided. Stick to the other side of the bracket.

After the Novak (or Novax?) Djokovic visa saga dominated pre-tournament headlines, we can finally look forward to some on-court headlines as the Australian Open gets underway. Djokovic news has taken the focus off of the tournament, which is certainly understandable. After all, the fate of the world number one and top seed would significantly impact END_OF_DOCUMENT_TOKEN_TO_BE_REPLACED