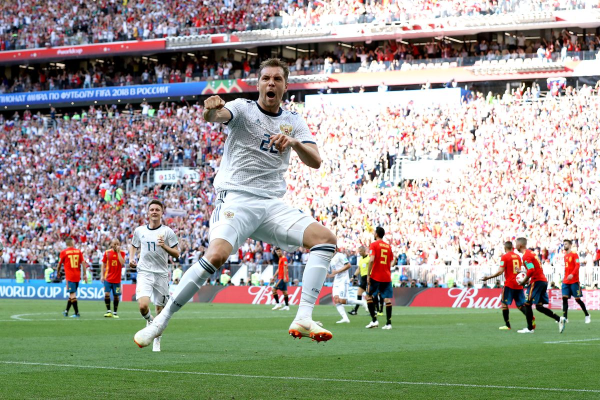 The 2018 World Cup has been very unpredictable, to say the least. Of the top 8 seeds, only Brazil, Belgium and France survived the round of 16.

Germany, the 2014 World Cup Champions, and Poland tipped for greatness in this World Cup, exited the tournament at the bottom of their respective groups. Both teams won just 1 of their 3 games and lost the remaining 2.

Portugal, Argentina, and Spain made it to the round of 16 together with tournament hosts, Russia. Uruguay beat Portugal, France beat Argentina, and Ronaldo and Messi met at the airport. Russia held Spain to a 1-1 draw and eventually sent the 2010 World Cup Champions home after a dramatic penalty shootout. Russia are in the Quarter Finals.

Speaking of drama, this tournament is in no way short of it. Mexico were all tears and were set to go home after being defeated in their last group game against Sweden but Korea’s win against Germany kept Mexico afloat. In the Round of 16, Japan lost a 2 goal lead against Belgium in the 74th minute and ultimately bowed out of the tournament thanks to what was quite literally a last-minute goal from Belgium’s Nacer Chadli.

Uruguay vs France is a tough one to call. Both have superstar power in their ranks, both have been playing well as a unit, both have had spectacular displays in their previous matches. You’d almost wish this was the final instead of an elimination match. But let’s face it, one will progress, one will have to go.

Perhaps the biggest blow to Uruguay’s chances is that their talismanic striker, Edinson Cavani, is unlikely to feature in the upcoming game against France. Cavani limped off the pitch after scoring 2 fantastic goals against Portugal. It was later confirmed that he sustained a hamstring injury during the match. Yes, Uruguay still have Luis Suarez, who is already a threat by himself, but with Cavani on the pitch, their link-up play can be devastating. Case in point – that first goal against Portugal. Cavani’s absence would also most likely mean a tighter lockdown on Suarez.

France, on the other hand, have shown moments of brilliance as with their 4-3 win against Argentina but there’s this looming feeling that they haven’t quite played their best. France are deadly on the break especially with M’bappe making those Olympic runs, but they do tend to switch off at times. For instance, they should’ve won 4-2 against Argentina had they been a tad bit more focused defensively leading to that 3rd goal by Aguero.

So Uruguay vs France? It can really go either way. I have a feeling that France should win it in 90 minutes or Uruguay will win in extra time and penalties.

We haven’t quite seen the spectacular from Brazil just yet; except perhaps for Neymar’s theatrics. Brazil’s attack hasn’t been as flowing as one would expect and, at times, it looks as if they aren’t as confident in front of goal. This is not something you’d expect to hear about a Brazil team but it seems like it will be their defensive play that will get them through to the semis. If Thiago Silva can hold his line and Philippe Coutinho continues to make those wonder-passes on the counter-attack to an inspired Firmino or Willian, it’s game on.

As for Belgium, they will be approaching this match with renewed self-confidence and belief that they can go all the way through to the finals after surviving Japan. And they could: Belgium’s Golden Generation has won each match they’ve played in this World Cup, drawing first blood in every game except the last. Their scores have mostly been convincing and, when tested, they pull through from behind.

Belgium have what it takes to progress and could very well make it to the final.

It’s probably safe to say that Russia making it this far was something rather unexpected. While Russia making it to the round of 16 was a safe enough bet, few would’ve thought they’d win against Spain to make it through to the quarterfinals. But here they are set to face Croatia. At this point, world rankings seem to be immaterial.

Russia ran riot against Saudi Arabia and won comfortably against Egypt, but under stronger opposition, it hasn’t exactly been smooth sailing for them. They lost 3-0 to Uruguay and won only on penalties against Spain after keeping the score level at 1-1.

Croatia on the other hand, you could say, have been more convincing. 3-0 against Argentina was arguably their best test in the group stages and Iceland and Nigeria weren’t a stroll in the park either.

I expect Croatia to emerge victorious but hey, Germany and Poland happened.

“Football is coming home!” That’s what England and all their fans say and believe. From the looks of things, it’s not a far-fetched possibility. England have youth, pace, skill, Harry Kane and a lot of luck on their side. Their chances are good indeed, but first, they must defeat a resolute Sweden.

The thing about this Sweden team is that “giving up” doesn’t seem to exist in their vocabulary. They just keep coming. And no matter how depleted they look at times, they just keep plowing on. Sweden have shown a remarkable work ethic in this tournament. They may not have the best finishing but they do get the job done.

On paper, England should win this match but Sweden have been resilient thus far. Something in my gut tells me Sweden will progress.