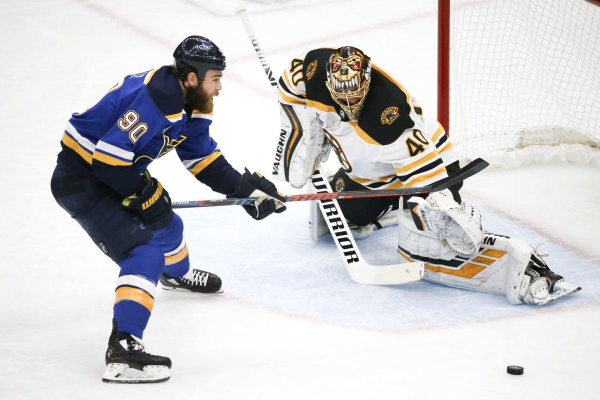 Game 6 of the Stanley Cup Final took place Sunday night in St. Louis. The Blues were up 3-2 in the series and were looking to close out the season at home to claim their first-ever Stanley Cup. Boston came into town with other plans. The Bruins were able to shut down the Blues and win by a score of 5-1.

The Blues will now have to travel back to Boston for Game 7 on Wednesday night. Boston is favored in the final game of the year –165.

The Bruins went into St. Louis facing elimination down 3-2. The last time they were down 3-2 in a series was in the first round while playing the Toronto Maple Leafs. The Bruins owe a lot of their success in Game 6 to the outstanding play by veteran goaltender Tuukka Rask. The Bruins goalie stopped 28 of 29 shots in Game 6 and earned the first star of the game. Rask leads all goalies this year in the playoffs in save percentage and GAA. If the Bruins can win Game 7 at home, Tuukka is favored to win the Conn Smythe trophy for the Bruins, the trophy awarded to the NHL’s playoff MVP.

Despite several injuries, the Bruins’ defense was able to step up in front of Rask, holding the Blues to only one goal. Boston mixed up its lines to shake things up and get more production. This seemed to pay off as they were able to get points from all over the board. Marchand and Pastrnak from the top line were able to score goals, as well as defenders Carlo and Chara.

The Bruins have now outscored the Blues 21-14 in the first six games of the Stanley Cup Final. We have seen each team play extremely well in the series, but Boston owns the two biggest wins so far, one 7-2 and the other in Game 6 that ended 5-1. The most the Blues have been able to beat Boston by in one game has been two.

While the Blues dropped Game 6 at home, they still have plenty of hope going into Boston for Game 7. After all, the Blues have actually been better on the road in the playoffs as well as one of the best teams at bouncing back after a loss all year.

Blues goaltender Jordan Binnington, in particular, has been an absolute force after losing this season. Potentially the lowest point of Binnington’s first Stanley Cup Final was the 7-2 loss in Game 3, where he was pulled after giving up five goals. Binnington came back to win the next two games in a row, giving up a total of three goals.

The frontrunner for the Conn Smythe trophy in St. Louis is Blues center Ryan O’Reilly. This is O’Reilly’s first year in St. Louis, but he has made his presence felt. He has now scored a goal in three straight games and is constantly finding the puck and making an impact on most plays. If the Blues are going to pull off a Game 7 win, look for O’Reilly to make a huge impact and help dictate the tempo of the game.

Game 7 in Boston will be a dogfight all game long. The series has been getting more and more aggressive every game, and the finale should be no different. Both teams will look to take control early and dictate the tempo of the game. Despite the Blues being a great road team, I am taking the Boston Bruins to win Game 7 at home.